Heads Up Seven Up!
Lucky Episode 7 is here, and these new contributors came to play!
For this episode, we reached out to New Friends outside of our personal networks to contribute and they more than delivered. These animators chipped in from all over the world!  Check out the episode and learn more about the contributing artists below:​​​​​​​

0:07 THE STRONGEST MAN IN THE WORLD
Creator: Adam Taylor
Instagram: @adamtaylor_animator
Title Illustrator: Erin Taylor
Instagram: @erintaylorillustrator
Voice: Eric Taylor
Instagram: @erictaylortenor
Animation Wild Card presents, @adamtaylor_animator :⁠⠀
⁠⠀
"Hi! I’m Adam Taylor, a stop motion animator in Portland, Oregon. I love animating! I feel blessed to have had the pleasure of working in the great studios here in Portland, such as Laika, House Special, Bent Image Lab, Shadow Machine, and Big Giant, as well as some great ones around the country. I am currently working on Wendell and Wild! A real dream project. When not animating, I enjoy hanging out with my uber-talented wife Erin and our 2 goofy kids, making pizza, and traveling the globe. So many amazing cultures and great food to experience."⁠⠀

Creator, @adamtaylor_animator , shared a bit about the process of making "THE STRONGEST MAN IN THE WORLD" :⁠⠀
⁠⠀
"THE STRONGEST MAN IN THE WORLD is made of only the strongest materials. You know, like aluminum wire, Sculpey clay, steel stick, fabric, paint, and pure energy to stick it all together.⁠⠀
⁠⠀
The family jumped in to help create this one. Erin (@erintaylorillustrator), my wonderfully talented wife, created the burly artwork for the title card. Eric (@erictaylortenor), my younger brother who is much bigger than I am, is an OPERA singer and added a powerful voice to our main man.⁠⠀
⁠⠀
While shooting, it was 100 degrees in the studio - IN PORTLAND, OREGON. Yikes! S.M. and I kept our cool thought and tossed that Gnarly Gnarwhal while barely breaking a sweat. Ok, I sweat more than THE STRONGEST MAN did. It was just so hot!"⁠⠀ 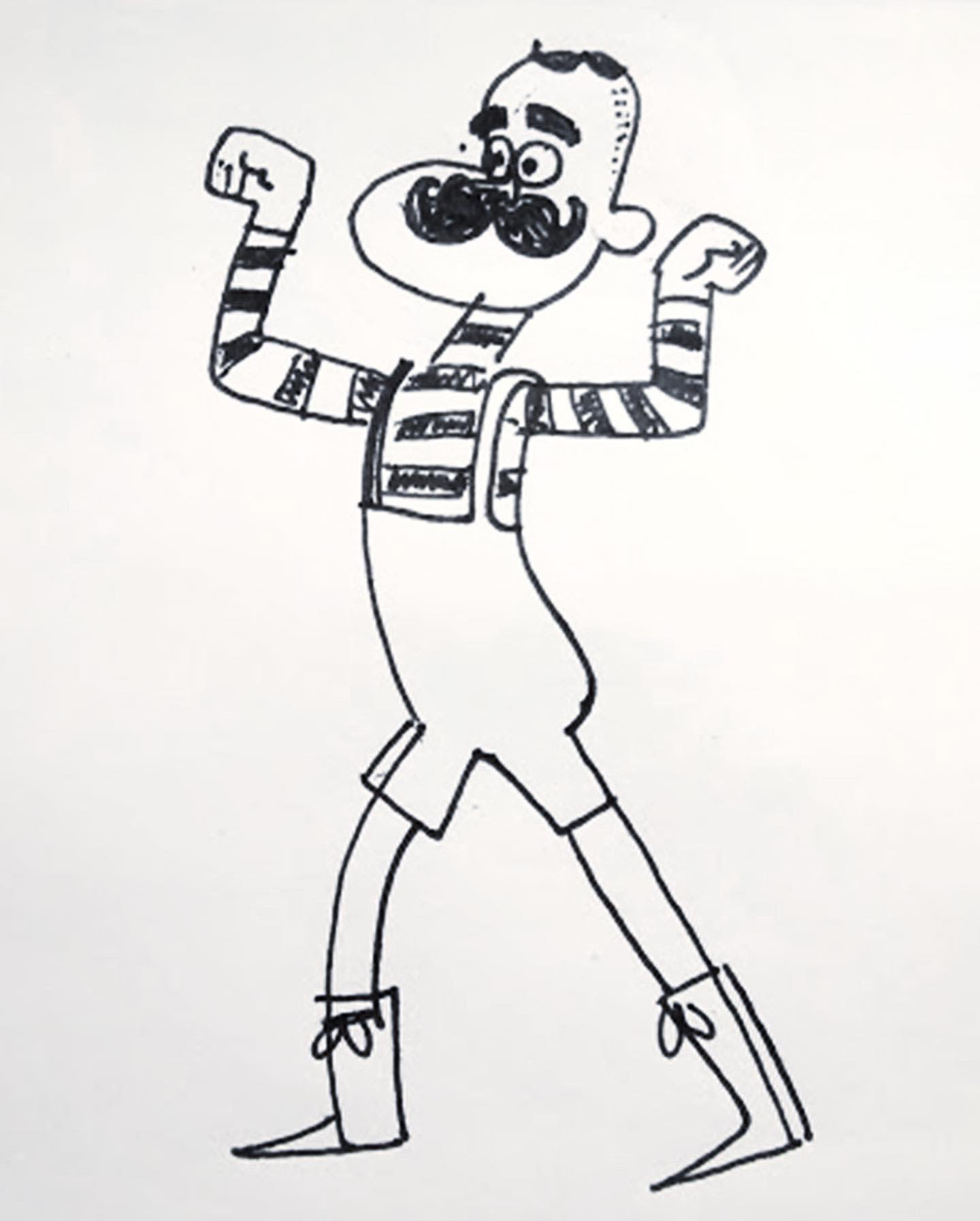 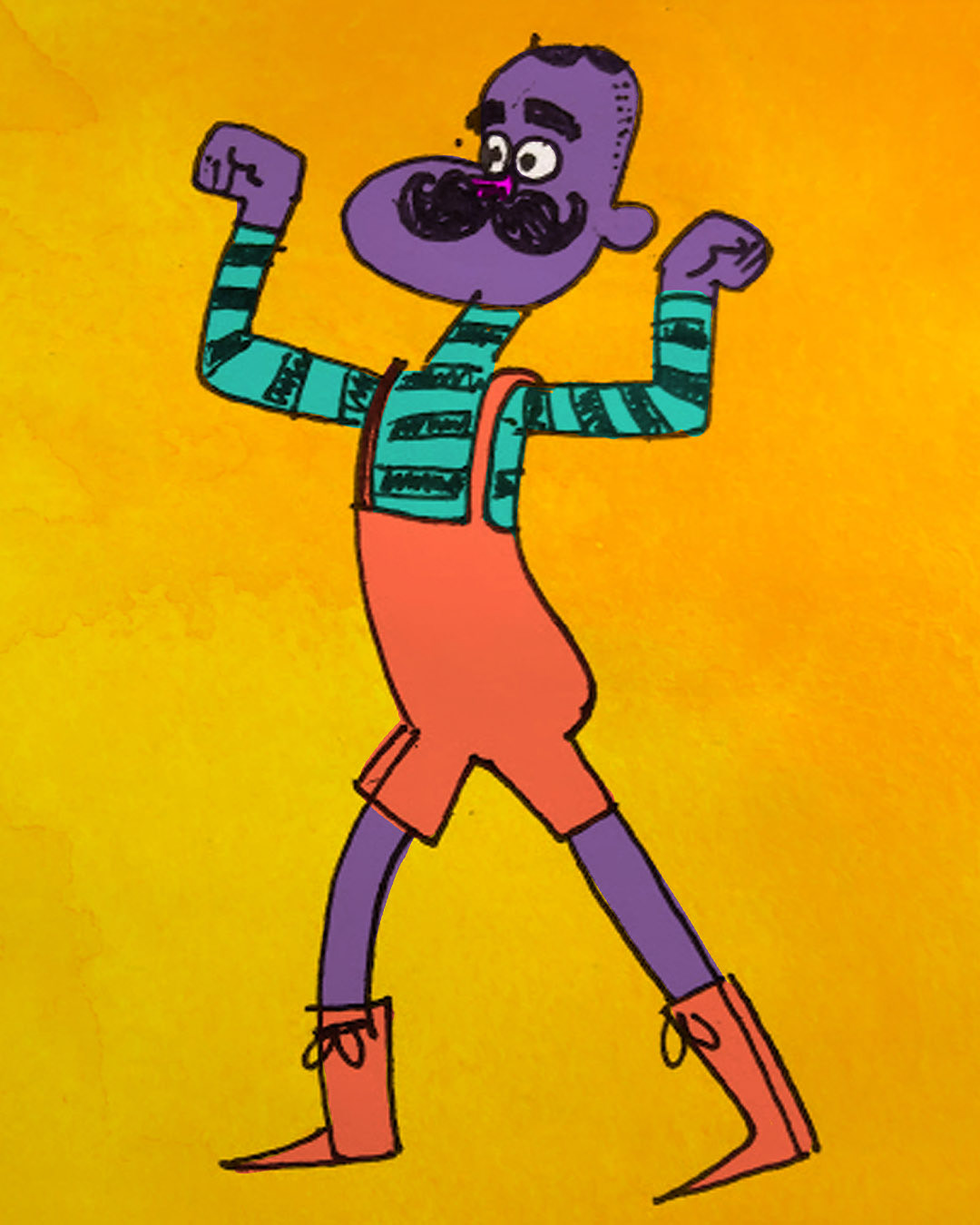 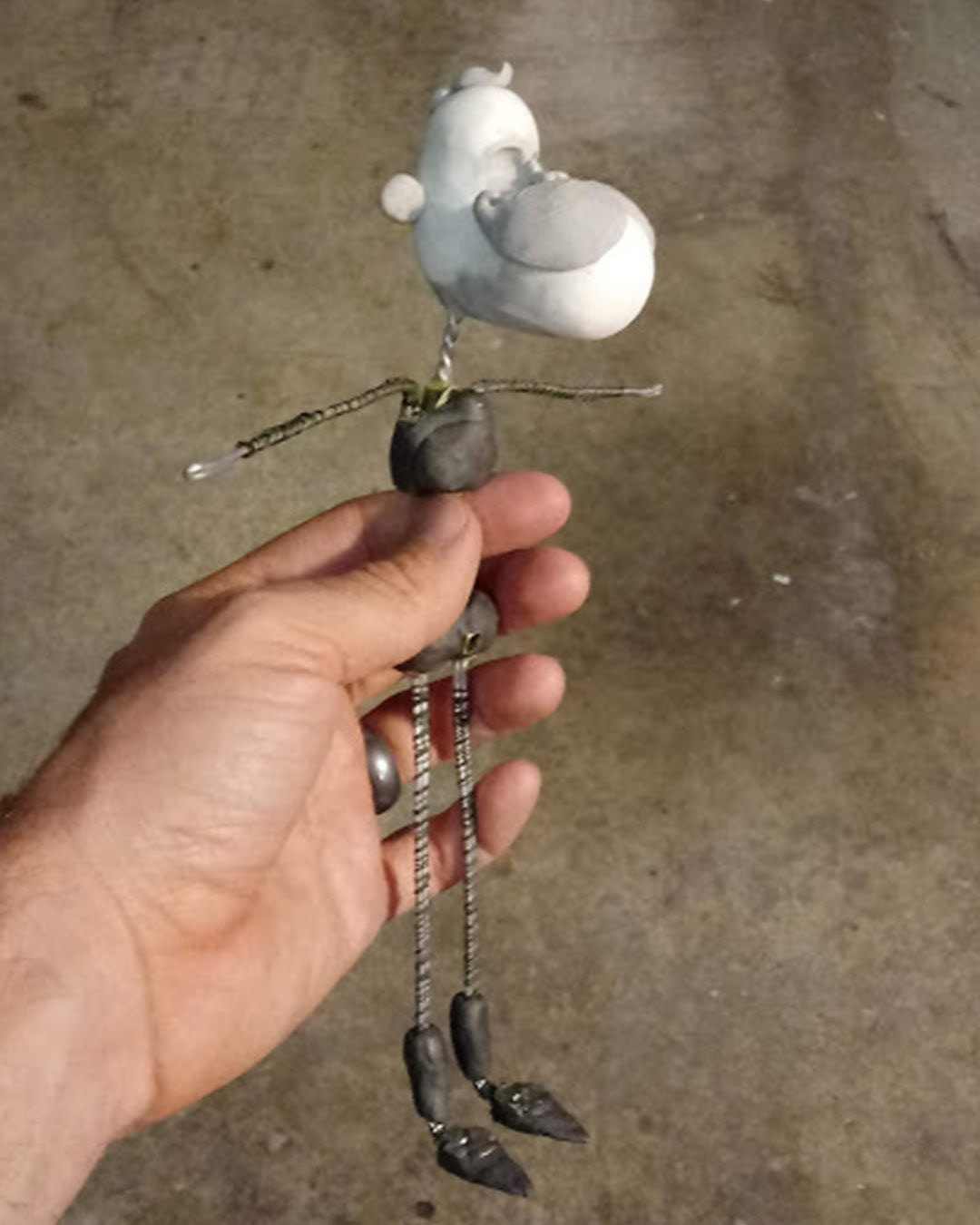 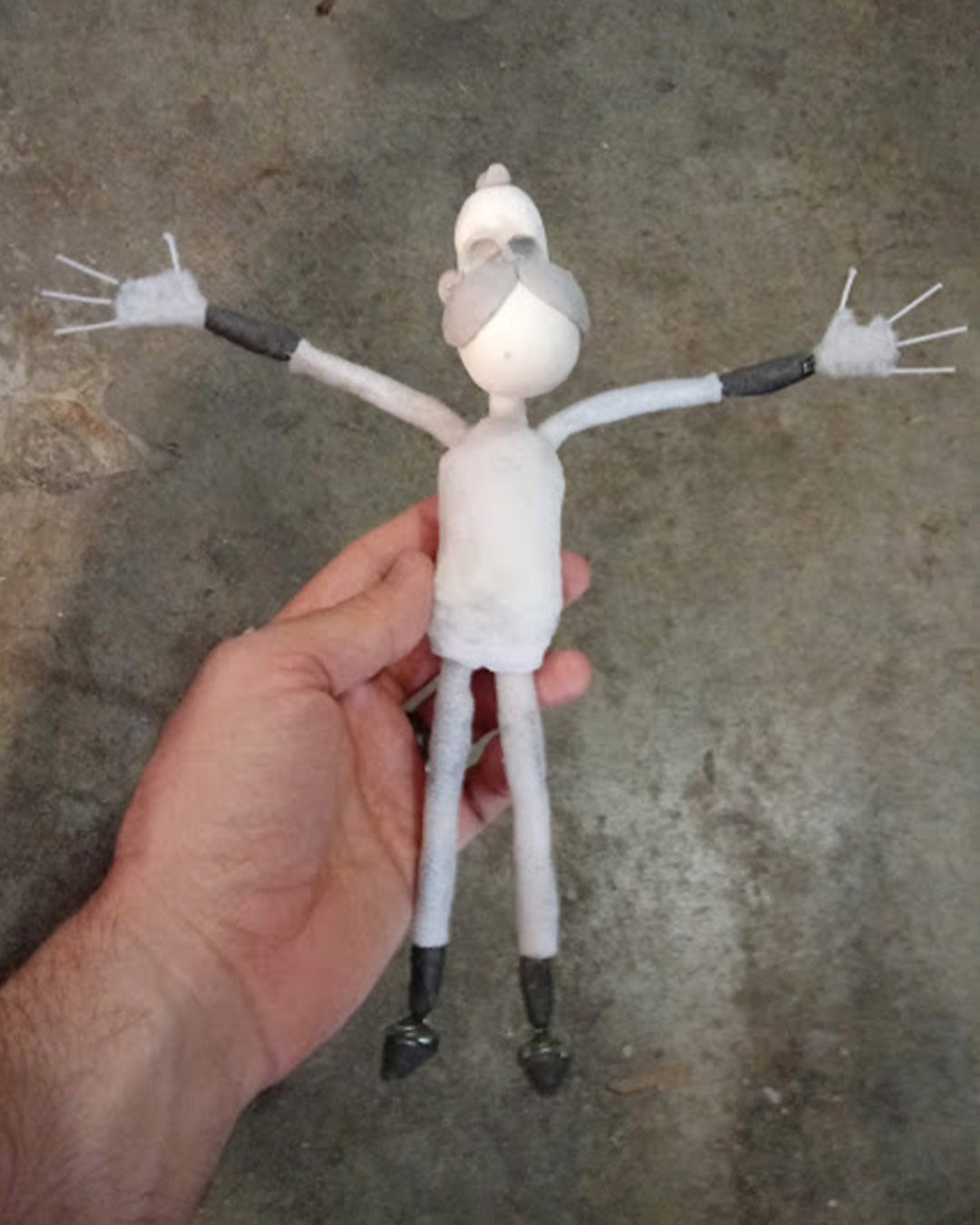 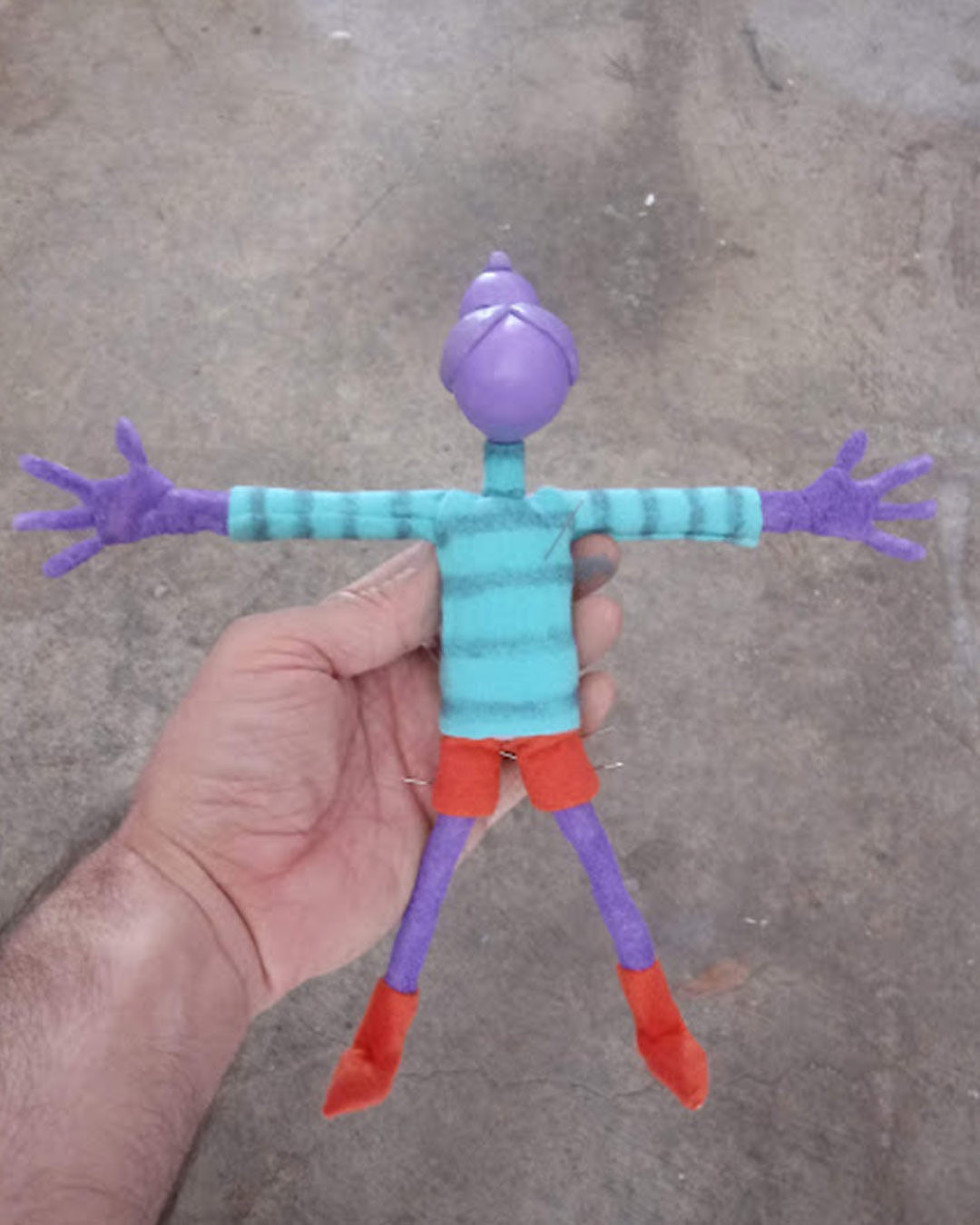 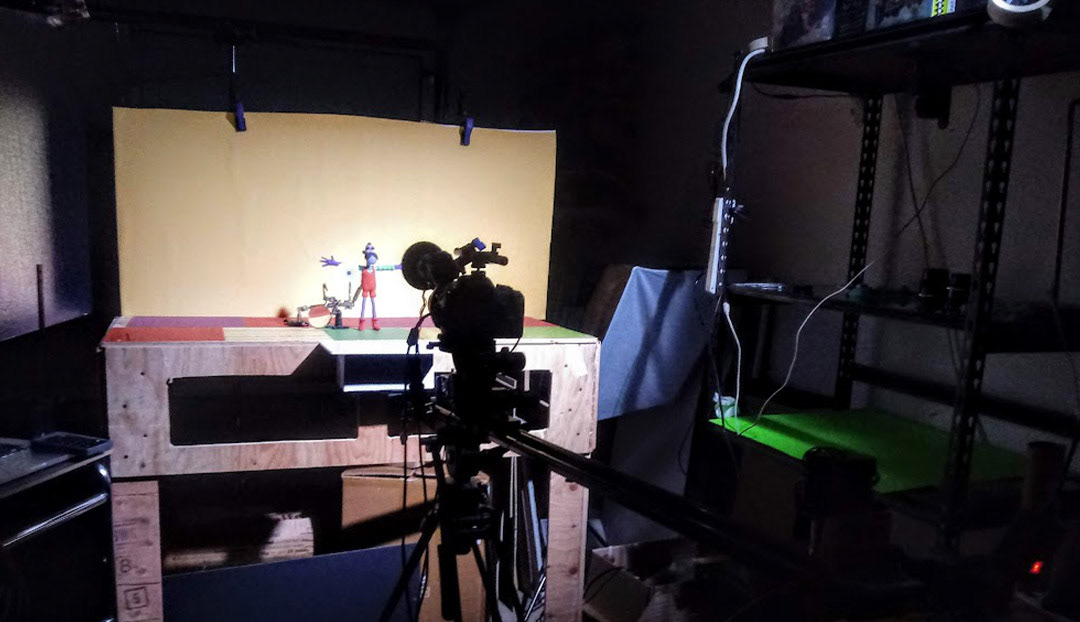 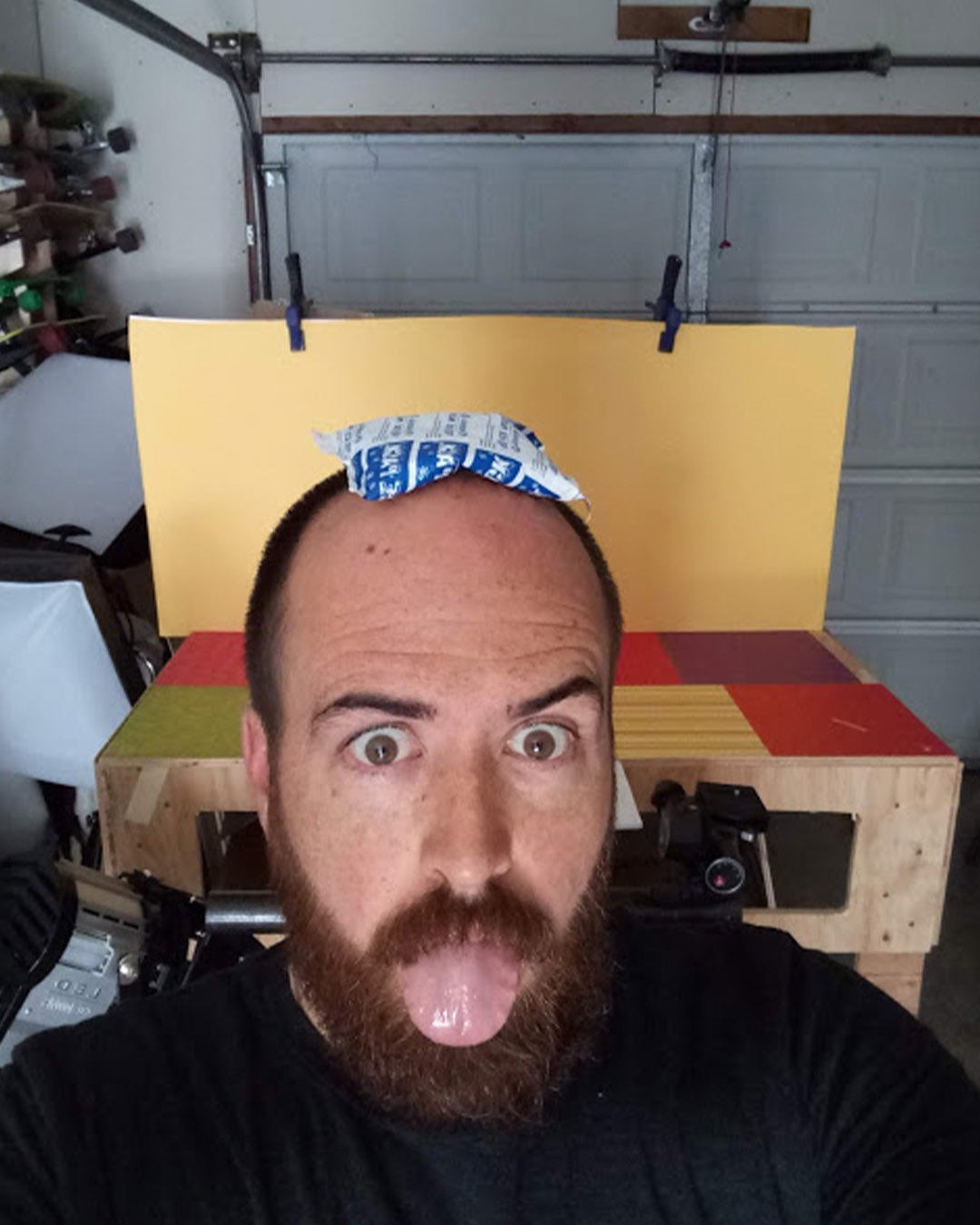 0:43 ears of different shapes
By: kindclutter (robby cimino)
Instagram: @kindclutter
Twitter: @kindclutter
YouTube: https://www.youtube.com/kindclutter
Animation Wild Card presents, @kindclutter :⁠
⁠
"i like to make clumps grunt. i try to make cartoons that make the sounds you muffle while munching. i like the sound of bug tusks. microphones aren’t good enough to get those sounds. i would like to make a cartoon about conjoined moths that fly in opposite directions but make it to a branch furry with pussywillow. or a red bat who tries to organize his file folders upside down. or a yak that won’t like himself if he doesn’t keep on his routine. i like the big talk & the small talk. whales, yaks, & mammoths. flies, mice, & spiders. instead of a picture of what i look like, here is a picture of the clutterfly. the clutterfly sprinkles lint in your pockets and paints dust on your books with a pastry brush. its mating call is a sneeze. thank you for reading & i hope you are wearing socks without any holes in them.⁠"
⁠
-kindclutter 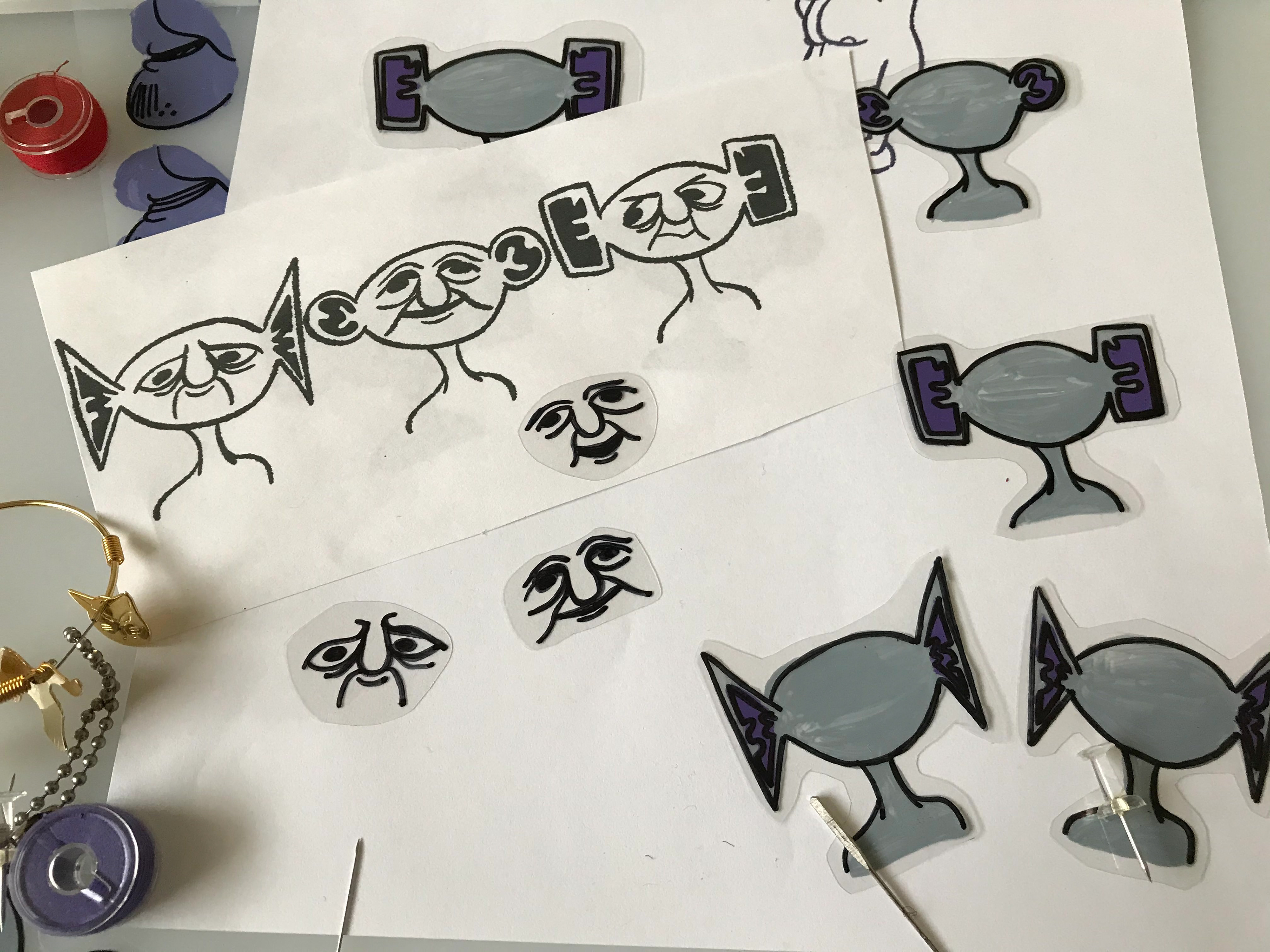 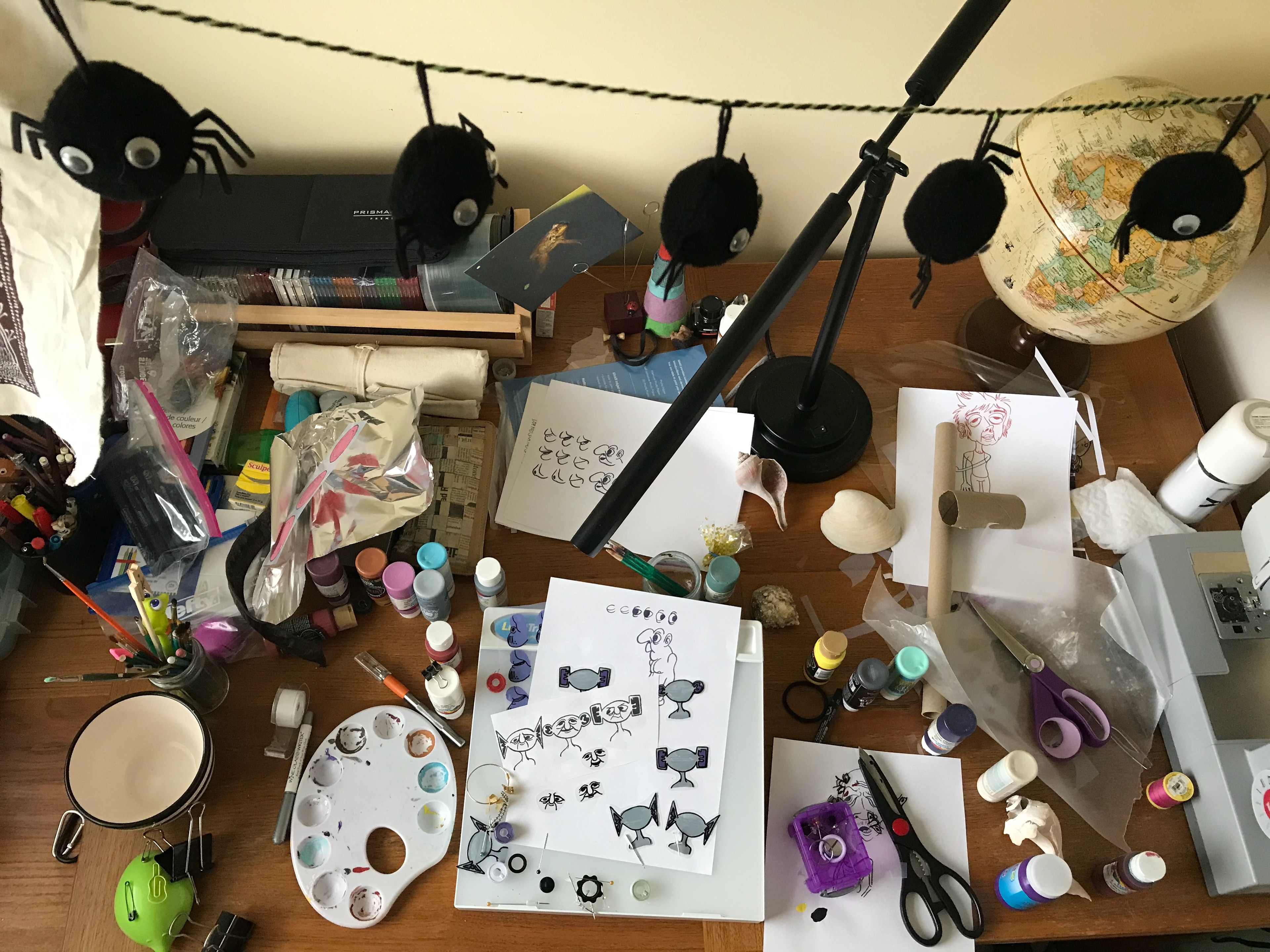 Animator / creator, @kindclutter , shared a bit about their process of making "ears of different shapes" :⁠⠀
⁠⠀
" i made this with hand-painted cels & a goofy grin which later turned into a sad smile when i understood what i had said. here are photos of how i worked on it. notice i am a minimalist; i only use items that are essential to each project."⁠⠀
———

1:11 MISTER TOPINO, Episode 1
By: Francesca Morea
Instagram: @stopmotion_fra
YouTube: https://www.youtube.com/channel/UCfnPfYp1a4BCMR_y_NwQVbA
Animation Wild Card presents, @stopmotion_fra :⁠⠀
⁠⠀
"hello! I am francesca and i live near Rome. I've been drawing since i was born and that's the reason why i graduated at the comic academy in Rome. I had never approached to animation or stop motion before (even though I used to build puppet and miniature stuff) until October 2019 when I attended a three-month course. From that moment i immediately became very passionate and started to experiment. There is still a long way to go, but in the meantime, I’m really having fun! Did i tell you about my huge love for all animals?"⁠

Animator / Creator, @stopmotion_fra , shared some sweet behind the scenes photos of her miniatures and a time lapse of her animation process in making "MISTER TOPINO":⁠⠀ 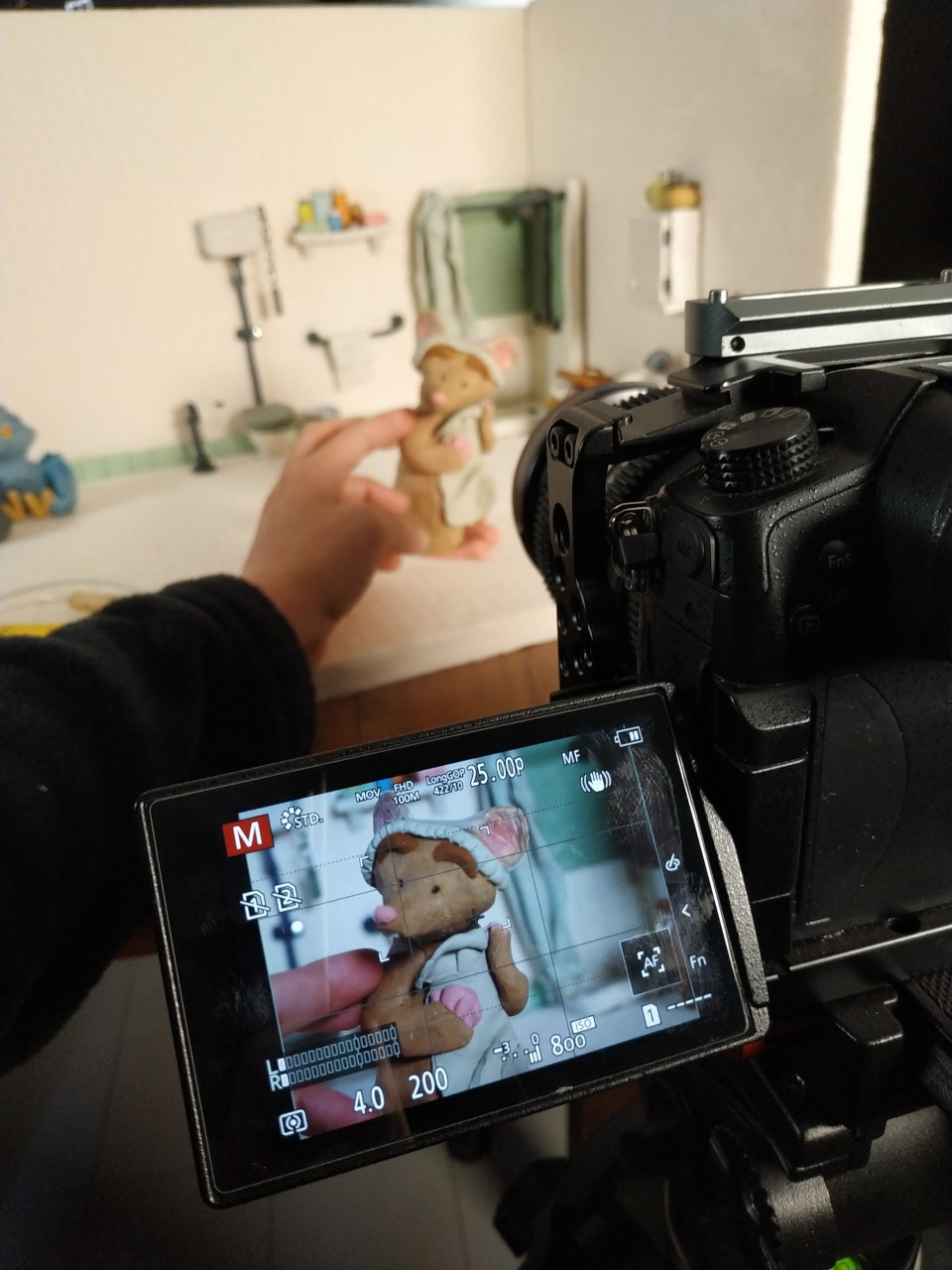 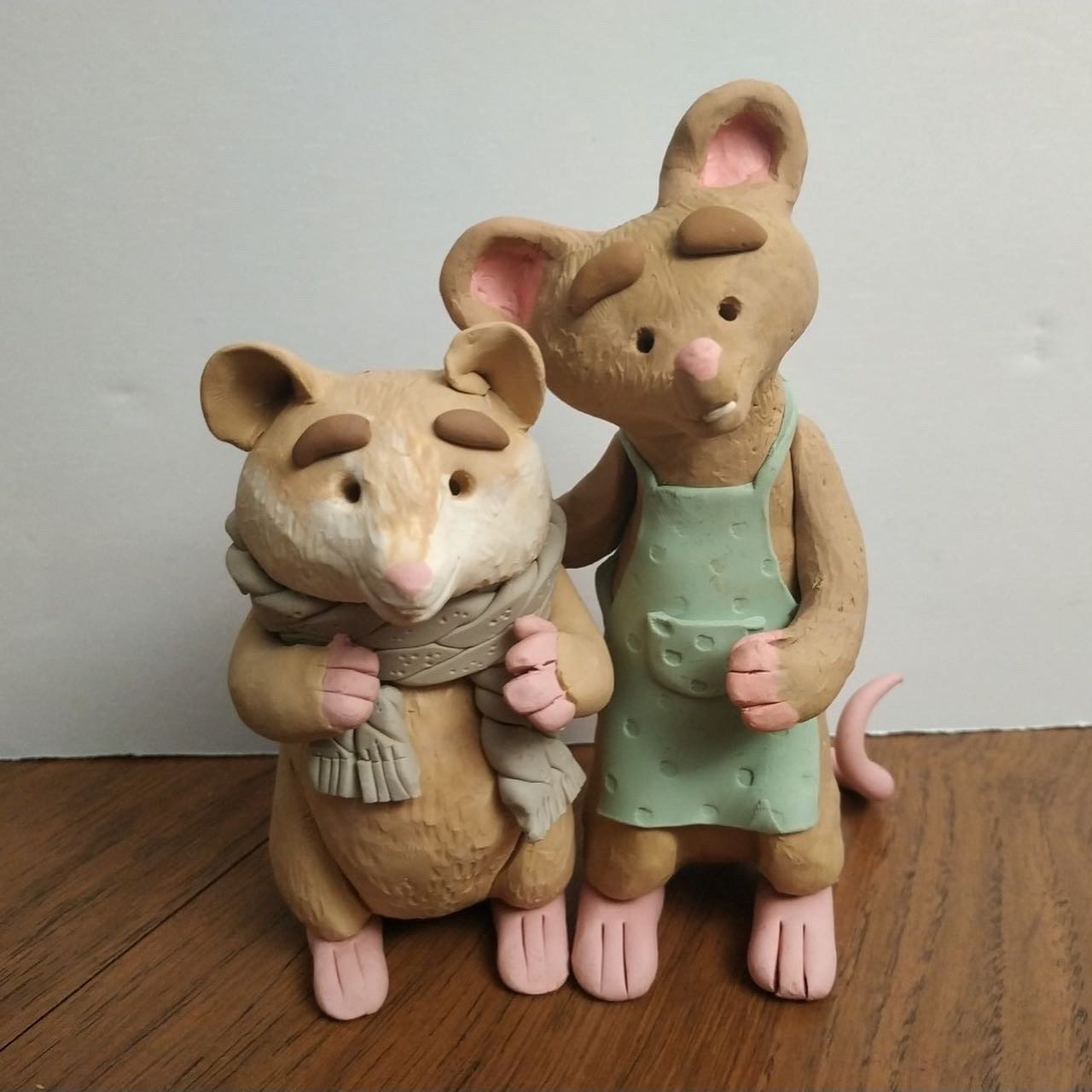 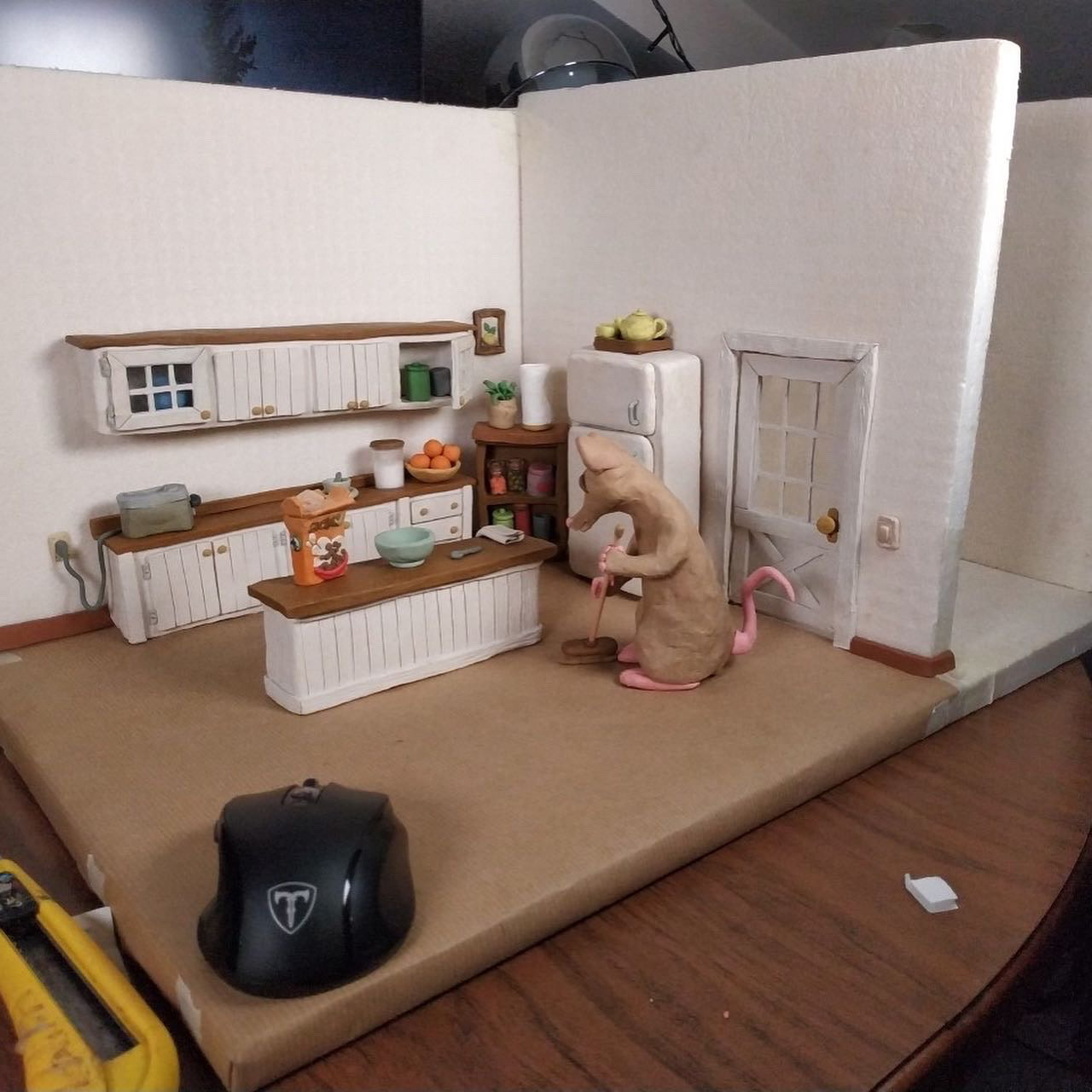 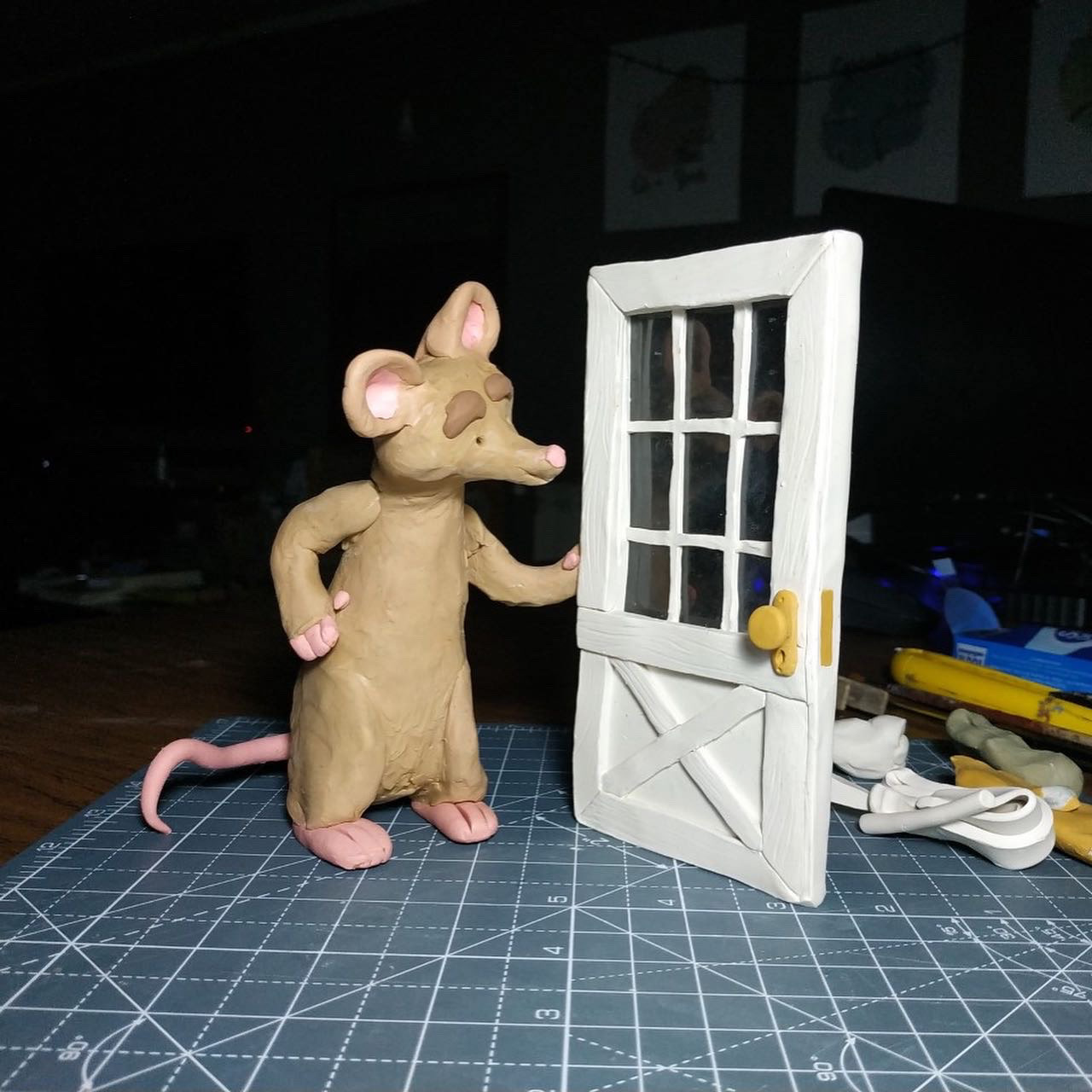 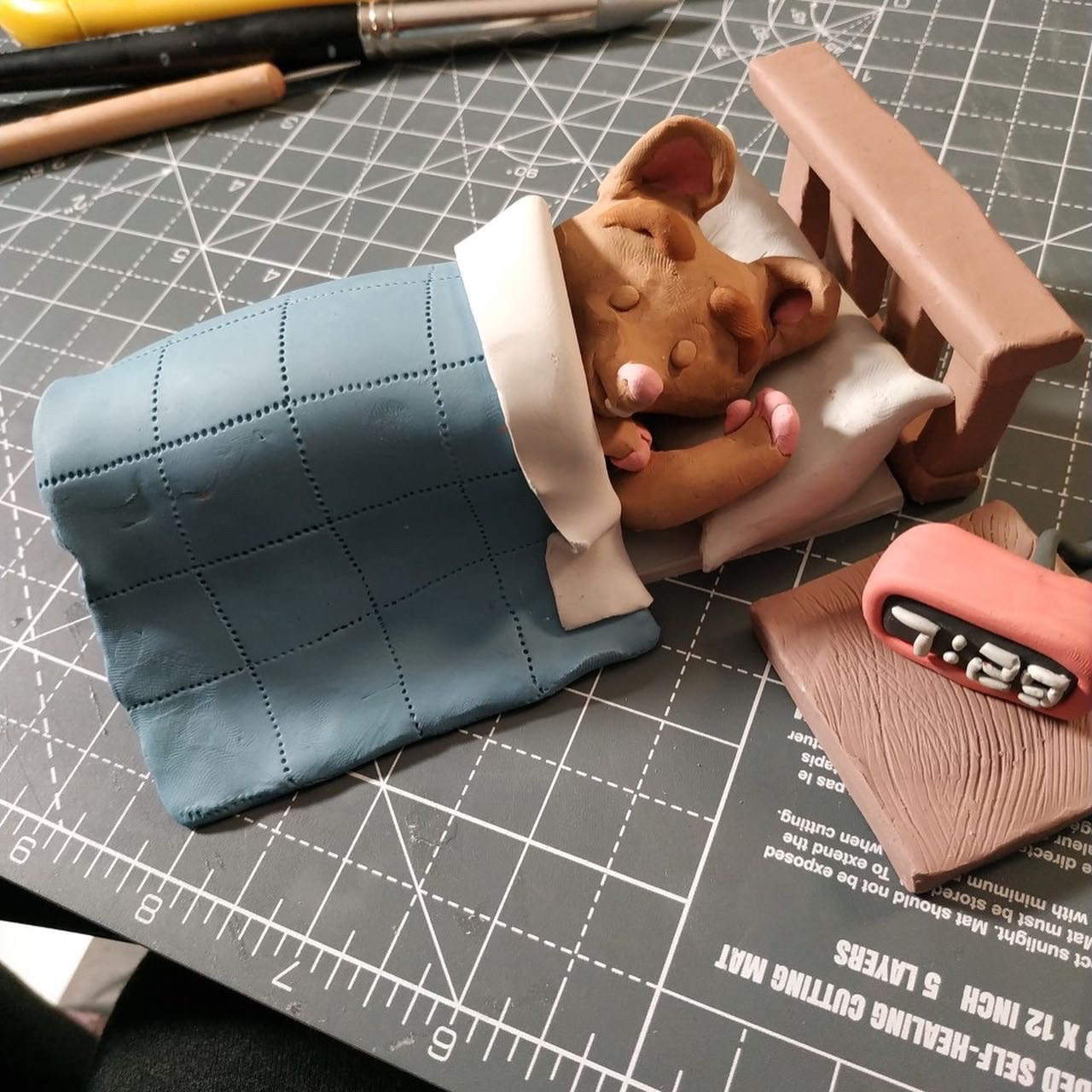 2:32 What's Inside?
By: dina A. Amin
Instagram: @dina.a.amin
YouTube: https://www.youtube.com/dinaaamin
Animation Wild Card presents, presents, @dina.a.amin :⁠
"Hi! My name is dina Amin, I am a stop motion animator and a maker from Cairo, Egypt. I never planned to become a stop motion animator and did not get any formal institutional education in animation. I originally studied Industrial design in Malaysia and I very accidentally stumbled upon stop motion animation while exploring my love for taking products apart. My work is usually one big bowl of all the things I love mixed together; stop motion, making, junk, maybe food, culture among many other things."⁠

Animator / Creator, @dina.a.amin , shared a lovely time lapse of her process of making "What's inside?"⁠⠀
⁠⠀
"you can’t see the transformations from that angle but you see the rig i used, i made it from two pipes that fit inside each other and a screw to tighten the inside pipe in place. That way i can move the products up and down and hide the rig underneath!"⁠

What's Inside: Behind the Scenes Photo

3:20 XII. The Dream Keeper
Adapted & Animated By: adrian quintero marmol martinez
Studio Facebook: @delotroladodelcero.films
Director's Instagram: @aqueldelotroladodelcero
Director's Twitter: @delotroladodel0
Nightmare Donated & Reenacted By: Valentina Marin
Instagram: @mafernifika (this is her mom’s IG account)
Music By: German Montes de Oca
Instagram: @germanmontesdeocam
Animation Wild Card presents, presents, @aqueldelotroladodelcero :⁠⠀
⁠⠀
"10 years in the underskirts of the mexican independent animation scene. adrian debuts as director in 2013 with the short film with long name “Of the Human Appendix and the Interdimensional Communication with the Underworlds of Magic” and after a long looong silence, the nightmarish “WHILE YOU’RE ASLEEP (my weird dreams happen)” series see the light of day on 2017, touring in several festivals from America, Europe and Australia."⁠
Director, @aqueldelotroladodelcero , shared a bit about the #process of making "XII. THE DREAM KEEPER":⠀
⠀
"CONCEPT⠀
To adapt actual dream horrors into short animations, first from my own bad dreams and from ‘nightmare donors’ later on.⠀
⠀
ANIMATION TECHNIQUE & VISUAL AESTHETIC⠀
I used #rotoscope to deliver a faithful realistic motion, contrasting with freaky and surreal happenings. Friends and family on the leading roles were recorded and wherever there was no chance at all, the internet was⠀
the source for some video footage. Backgrounds were taken out of the equation to let the action flowing in a “limbic state of unconsciousness”.⠀
⠀
WEB SERIES VS. FESTIVAL CANDY⠀
This was a 12-month/12-episode project (7 nightmares of my own and 5 donations from our audience). The expected audience was that from the internet/social media, but eventually we got more attention as compendia on Film and Animation Festivals around America, Europe and even Australia.⠀
⠀
ONE-MAN-ANIMATION-STUDIO?⠀
I’m used to work on my own at home, and even though I’ve collaborated here and there in local projects, I challenged myself this time to develop a full project with my own means and limited resources. Obviously you get to the fact that help is needed, so the music was composed by my dear friends German Montes de Oca (Milano, Italy) and Jorge Mabarak (Veracruz, Mexico). The cherry on top was family and friends acting these horrific dreams, that turned on the fun factor to a 1000%.⠀
As you can see, to get the credit alone for what has been achieved would be selfish and totally unreal.⠀
⠀
EPISODE XII - THE DREAM KEEPER⠀
This is an oneiric donation by the brave 6-year-old Valentina, who reenacted the whole thing. That is why this piece is fenomenal from where i stand: to literally make a dream come true (even a bad one!)."⠀
———

4:09 Bao’s Adventures: Self Portrait
By: Etienne Grégoire
Instagram: @magetico
Animation Wild Card presents, @magetico :⁠
⁠
"Hi theeere! ⁠I’m Etienne, a 22 yo guy, from Belgium. I’m learning animation in La Cambre, a Brussels based animation school. ⁠When I’m not animating, I do gymnastics, I'm a coach down here in Belgium, also judging. I love drawing, and imagine new stories. Playing with visuals, to create a new reality. ⁠
⁠
Here’s Bao, a little guy who joined me the first day of the confinement. You can find some more adventures on my Instagram profile : @magetico ⁠"

4:52 Impressions
Director & Sound: Héloïse Pétel
Instagram: @heloise_petel
Vimeo: https://vimeo.com/heloisepetel
Animation Wild Card presents, @heloise_petel :⁠⠀
⁠⠀
"Héloïse graduated in 2018 from the Animation department at ENSAD Paris. Even though she learned mostly 2D and experimental animation, she specializes in stop-motion. She recently perfected her animation technic while attending the Character animation course at Aardman Academy in partnership with NFTS. She is now working on different kind of projects and still hopes for new experiences.⁠⠀
⁠⠀
It is nice to be working on something personal from time to time, no one is here to tell you how to do it and what story line to follow. It stimulates the imagination and shakes your confidence (or not). ⁠⠀
⁠⠀
But I also love to collaborate. It makes things easier because everyone can concentrate on its part, its talent to share and the result is always way much better than if we had to do it alone. Plus it is more motivating because we keep pushing and supporting each other. One of the reason why I love animation is because it is a beautiful team work!"⁠⠀

Director, @heloise_petel , shared a bit about the process of making "Impressions" :⁠⠀
⁠⠀
"Luckily my father and I builded a down shooter stage (rostrum or banc-titre) in my bedroom just before quarantine. My room became more of a messy studio suddenly! I had enough materials at home to create, so it was a perfect moment to develop an old technic. ⁠⠀
⁠⠀
Silk paper or tissue paper is rarely seen in animation and I only tried it once at school 4 years ago. It was in black and white and from this time I have always wanted to develop it with colours. I was so curious to see what it would look like and wondered how to animate it. It was much more complicated than I thought but I had time for experiments. I was working alone and without any pressure. I learned while doing it. In that case, finding solutions and seeing the result was very exciting!⁠⠀
⁠⠀
The process for making this video starts with putting my idea in a sketch. Then I draw a much more realistic image which will be my reference for background. I then place my different colored silk papers on the down shooter stage following the drawing. ⁠⠀
⁠⠀
The background, on lower glass, is dried silk paper but animated elements, on upper glass, are wet silk paper. Once wet, it sticks to the glass and I can deform it and shape it as I want. For that reason it is different from cut out. Finally I animate (using Dragon Frame), edit the video and add some sounds."⁠⠀

———
Thank you for viewing Episode 7 of Animation Wild Card!
↑Back to Top