Episode 9 is so sublime!
Many, many THANK YOUs to all of our contributors who make each round a new surprise! Check out the episode and learn more about the contributing artists below:

0:11 Snuggle Time
Film By:  Fu Yang & Ben Ellebracht
Instagram: @cuckoostuff
https://fuyang.wixsite.com/fuyang
Instagram: @benji_ellebracht
https://benjamin-ellebracht.squarespace.com/
Sound Design By: Wonji Lee
Instagram: @tunes_tuesday
https://www.pianowonji.com/
Animation Wild Card presents, creators Fu @cuckoostuff and Ben @benji_ellebracht :⁠
⁠
"Fu is a stop-motion director and aficionado. She is a real badass and she smells like flowers. ⁠
Ben is a concept artist and art director. He is a real flower and he smells like badass. ⁠
They are married.⁠
⁠
In this episode, the duo collaborate with Wonji Lee @tunes_tuesday for Sound Design."⁠

Creators Fu @cuckoostuff and Ben @benji_ellebracht , shared a bit about the process of making "Snuggle Time":⁠⠀
⁠⠀
"The film itself is about living and working with someone in quarantine. It’s also kind of meta because we lived and worked on this film together in quarantine. So… we solved that. *high fives*⁠⠀
⁠⠀
While we worked on previous film together, it was in a capacity of director, and sound designer. This was our first project collaborating both as visual designers.⁠⠀
⁠⠀
We are working from our studio apartment. Literally half of our living space is dedicated to stop-motion. Fu became very anxious when Ben had to walk around the hot set. Ben had to have many zoom work meetings in the dark because of filming."⁠⠀ 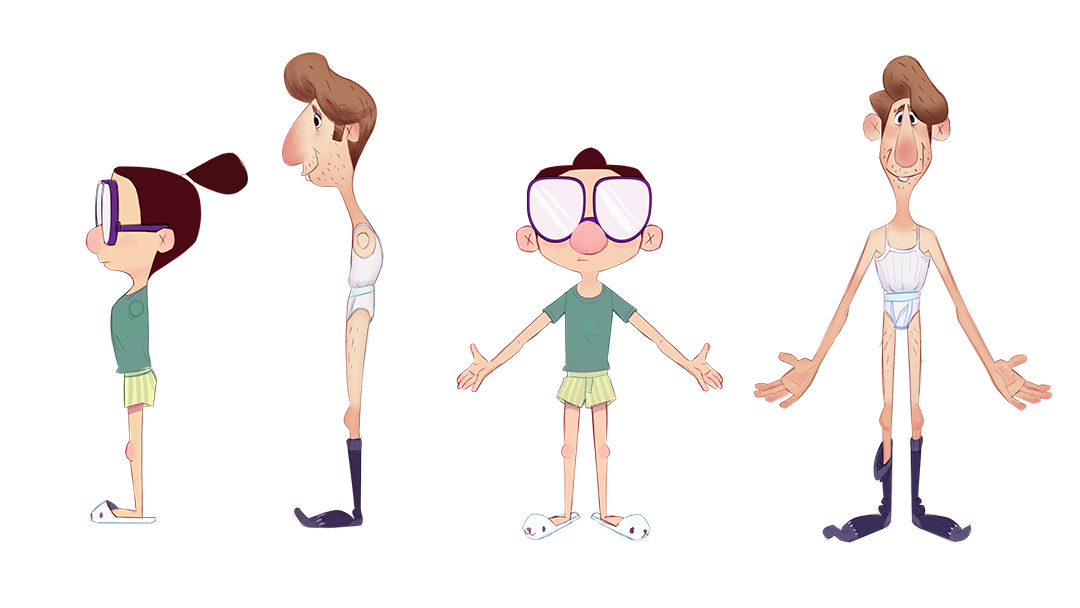 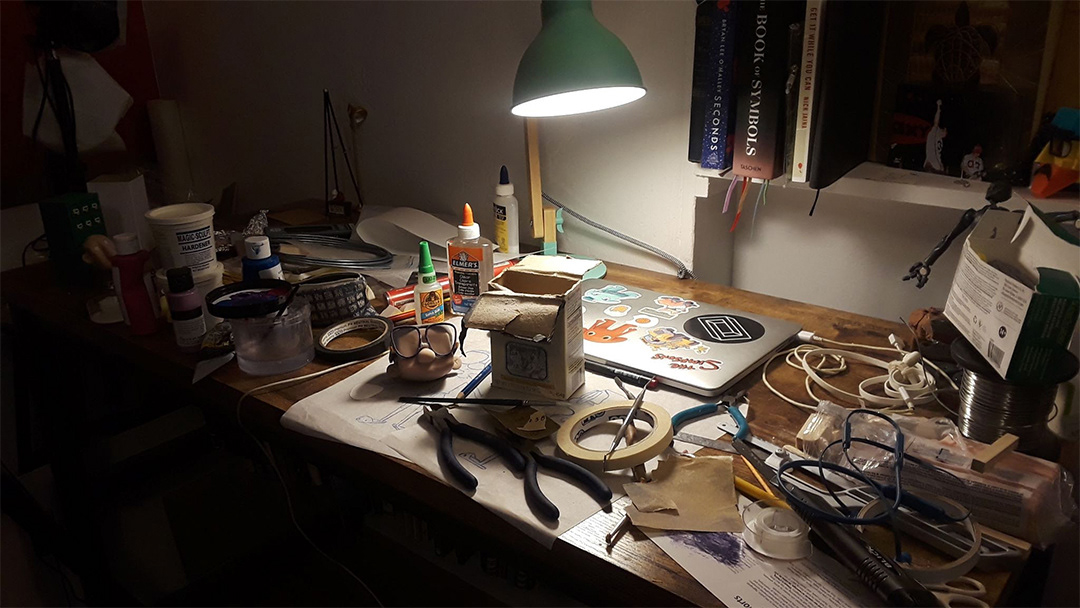 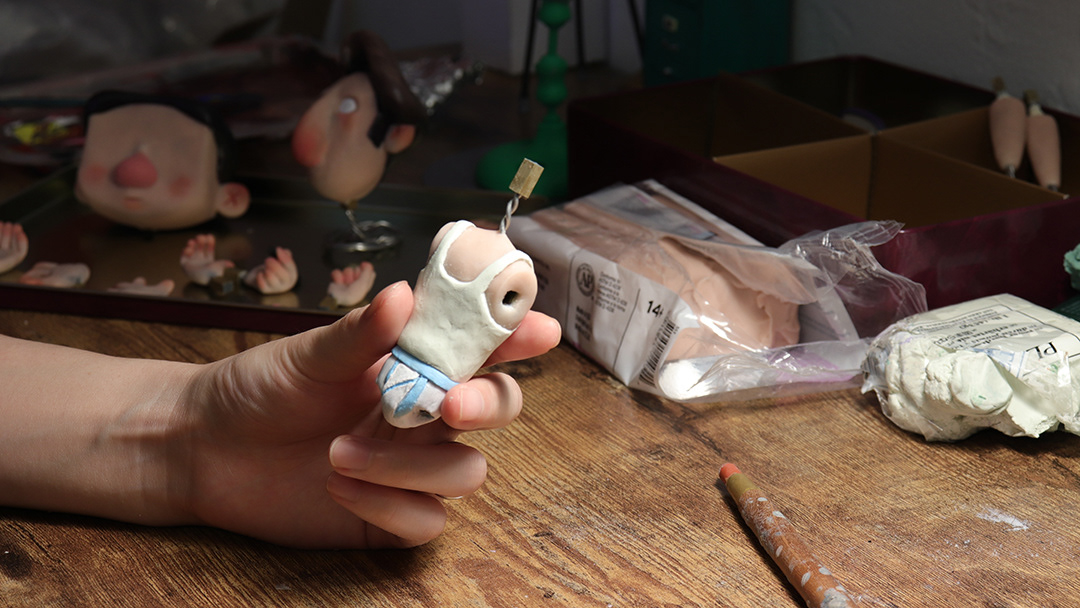 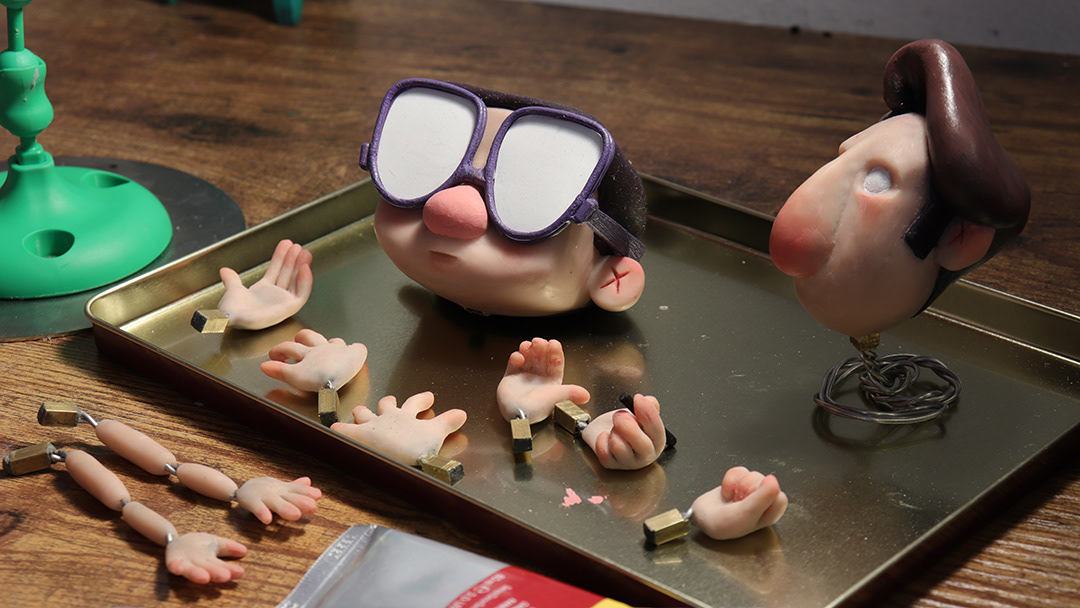 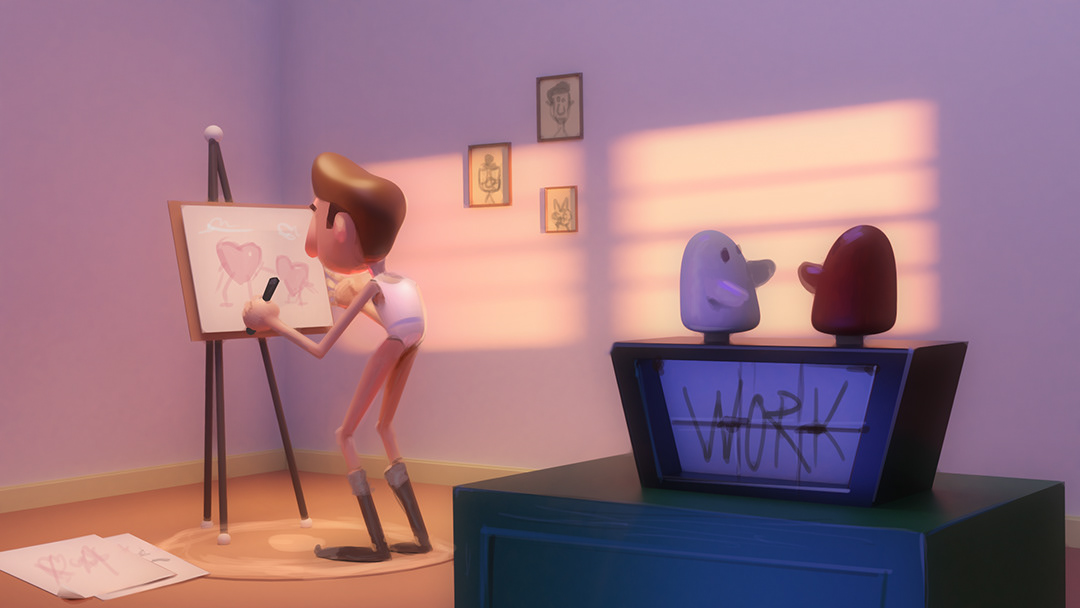 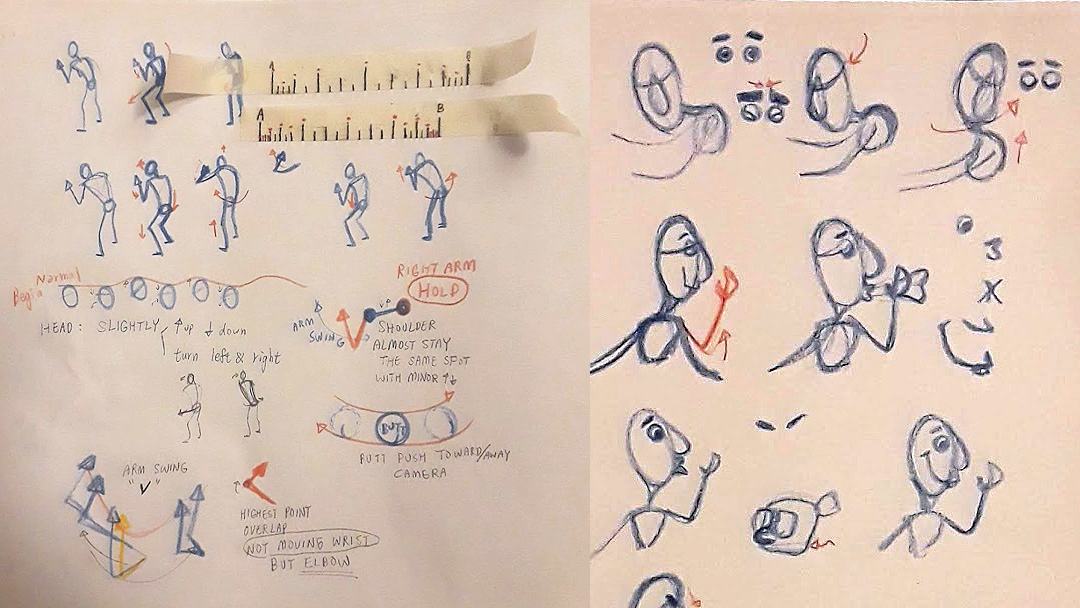 Behind the Scenes Clip 1

Behind the Scenes Clip 2

0:49 Do Not Flip Switch
By: Sean Willets
Instagram: @sean_willets
Twitter: @filmyguy
Animation Wild Card presents, @sean_willets:⁠⠀
⁠⠀
Hey there! I work as a stop motion animator, current place of work being @stoopidbuddystoodios. Iʼve worked on Robot Chicken, Buddy Thunderstruck, SuperMansion, and Iʼm currently working on one of the Stoodioʼs newest shows.⁠⠀
⁠⠀
I live in beautiful Burbank, California, and was born and raised in Glendale. I got started in animation during the free time I had from being homeschooled, and my parents pushing me to pursue what I wanted to do, which helped me focus my talents and get me where I am. On the side, I've also drawn a lot, so itʼs been a natural transition for me to move into 2D Animation with this short. I hope that it shows my ability in that area!⁠⠀
⁠⠀
You can check out my work on YouTube, that includes a lot of my LEGO work here. ⠀

Director / Animator, @sean_willets, shared a bit about the process of making :⁠ "DO NOT FLIP SWITCH" :⁠⠀⁠⠀
⁠⠀⁠⠀
"Here are the storyboards I made for the short, I stayed pretty true to the boards, although the execution changed. The zoom out revealing the characters was a late change and it helped sell it a whole lot. Even if you have to cut some animation, donʼt be afraid to change things to help things read better! Sorry I donʼt have more BTS, Iʼll have more to show next time, this one was just such a shortie."⁠ 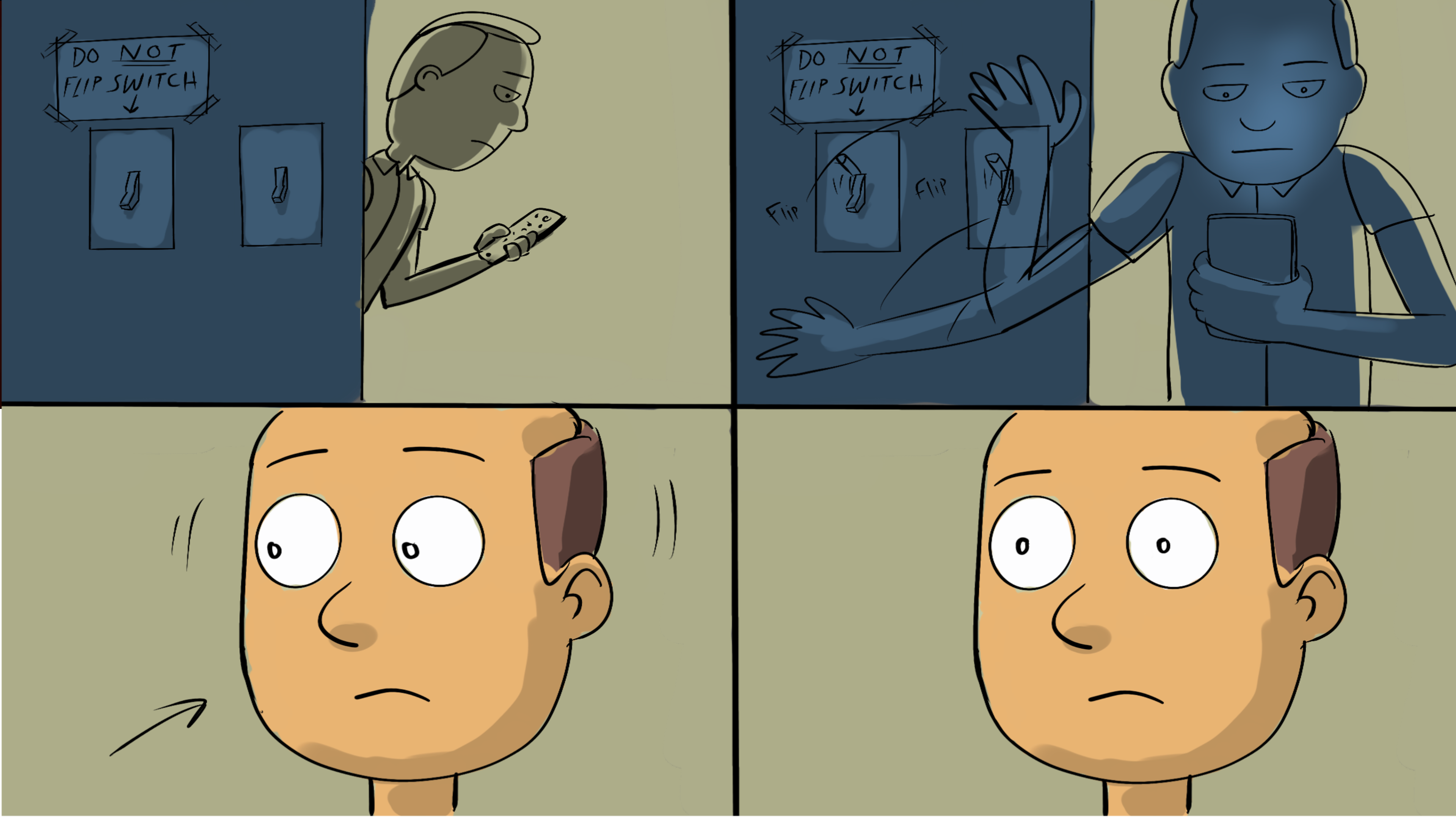 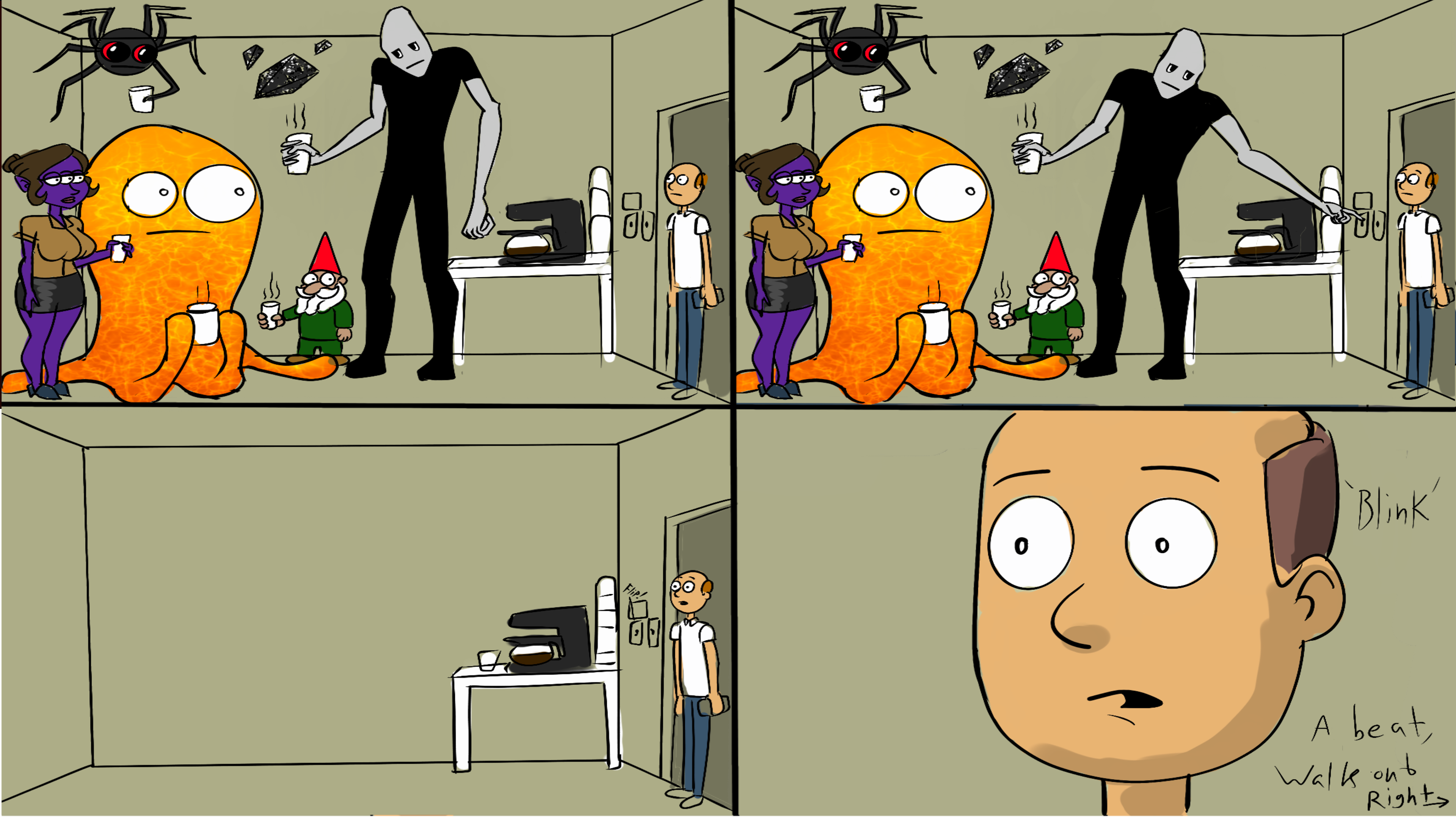 1:15 Flumpy
By: Threadwood
Instagram: @_Threadwood
https://www.threadwood.com/
Animation Wild Card presents @_Threadwood ⁠⠀
(individually known as @alexiseved & @sdaros):⁠⠀
⁠⠀
"We're a married stop-motion animation team hailing from the North East (NY state specifically). We've been collaborating and working together for over 10 years!⁠⠀⁠
⁠⠀⁠
We've been a part of many stop-motion projects, big and small, and various studios on both coasts. Scott has won an individual achievement Emmy for his animation skills, and we've both had team wins on 2 different Robot Chicken episodes as Animation Director and Art Director. Even with those freelance commitments, we've always prioritized working at home on personal projects that make us laugh.⁠⠀⁠
⁠⠀⁠
We spend a lot of our down time making weird faces/voices/dance moves at each other to try and make the other laugh - and sometimes they make for good shorts. This short series "Magical Cat" was inspired by a dumb song we sing to our cat when we get home from work (or if he emerges from another room after a long snooze). ⁠⠀⁠
⁠⠀⁠
We'd like to continue to share our sensibilities and sense of humor with anyone looking for a chuckle, or an eyeball-grabbing commercial."⁠

Creators @alexiseved & @sdaros of @_Threadwood , shared a bit about the process of making "Flumpy":⁠⠀⁠⠀⁠⠀
⁠⠀⁠⠀
"⁠The Flumpy puppets were fairly simple, and the background cat was actually the more traditional stop-motion puppet build. Since the indoor cat needed to do a lot of squashing and stretching, and because it was clay, we decided that we wouldn't need much of an armature, just some solid inner pieces to reduce the weight (Sculpey Ultralight), maintain the size, and to add rig point for the frames where he jumps up in surprise. We also built a bunch of paws to save time sculpting the little toes and limit color crossover. ⁠⠀
⁠⠀
We wanted the colors of the set to reflect the cats- the warm, cozy indoor cat and the cold, unsettled outdoor cat. The set was built with wood, coated in a clay material that air-dries, then painted. We animated the hanging plant on a separate animation pass/take because the set was a little tight and we didn't want it to be bumped accidentally during the cat animation."⁠⠀ 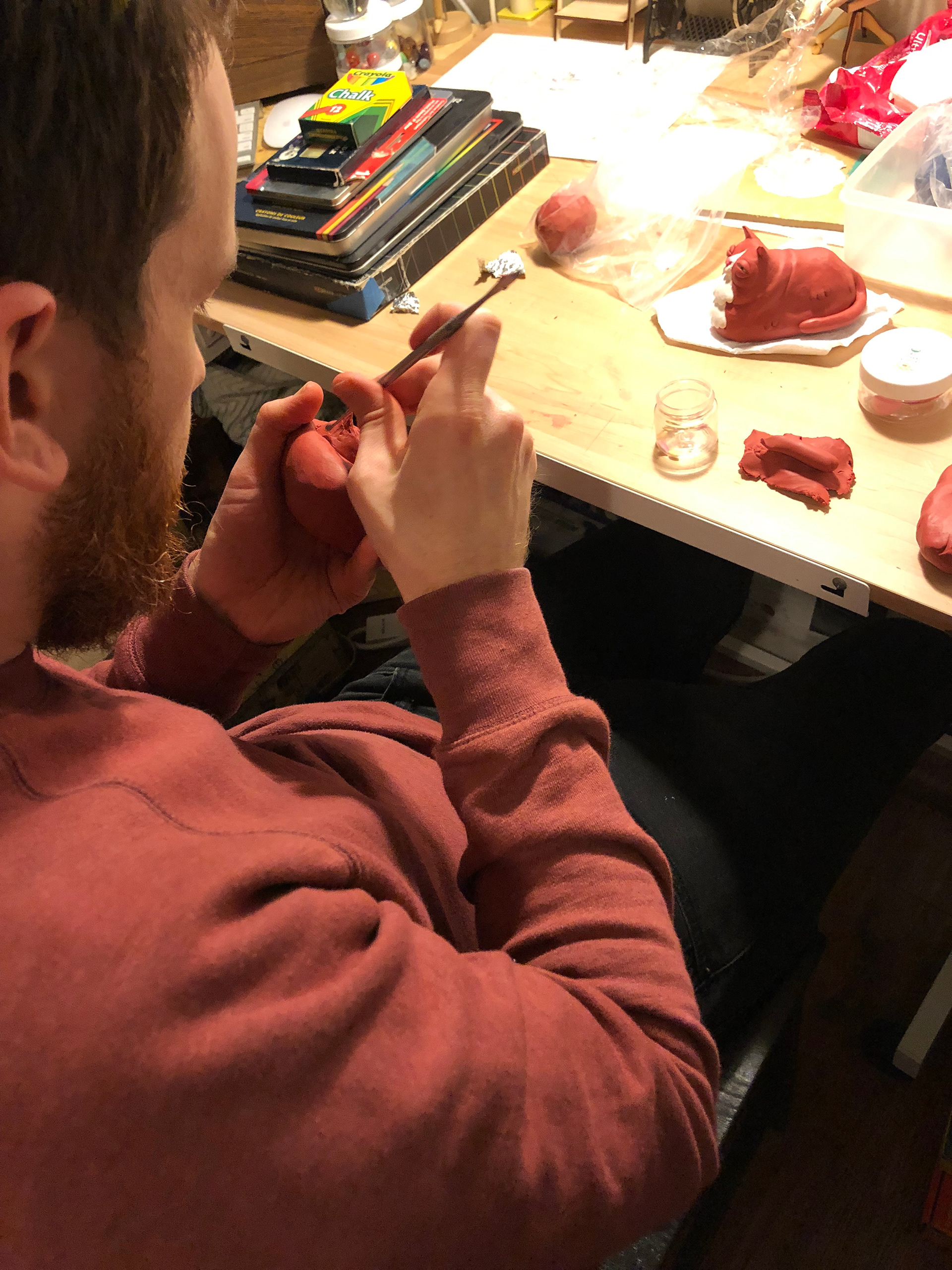 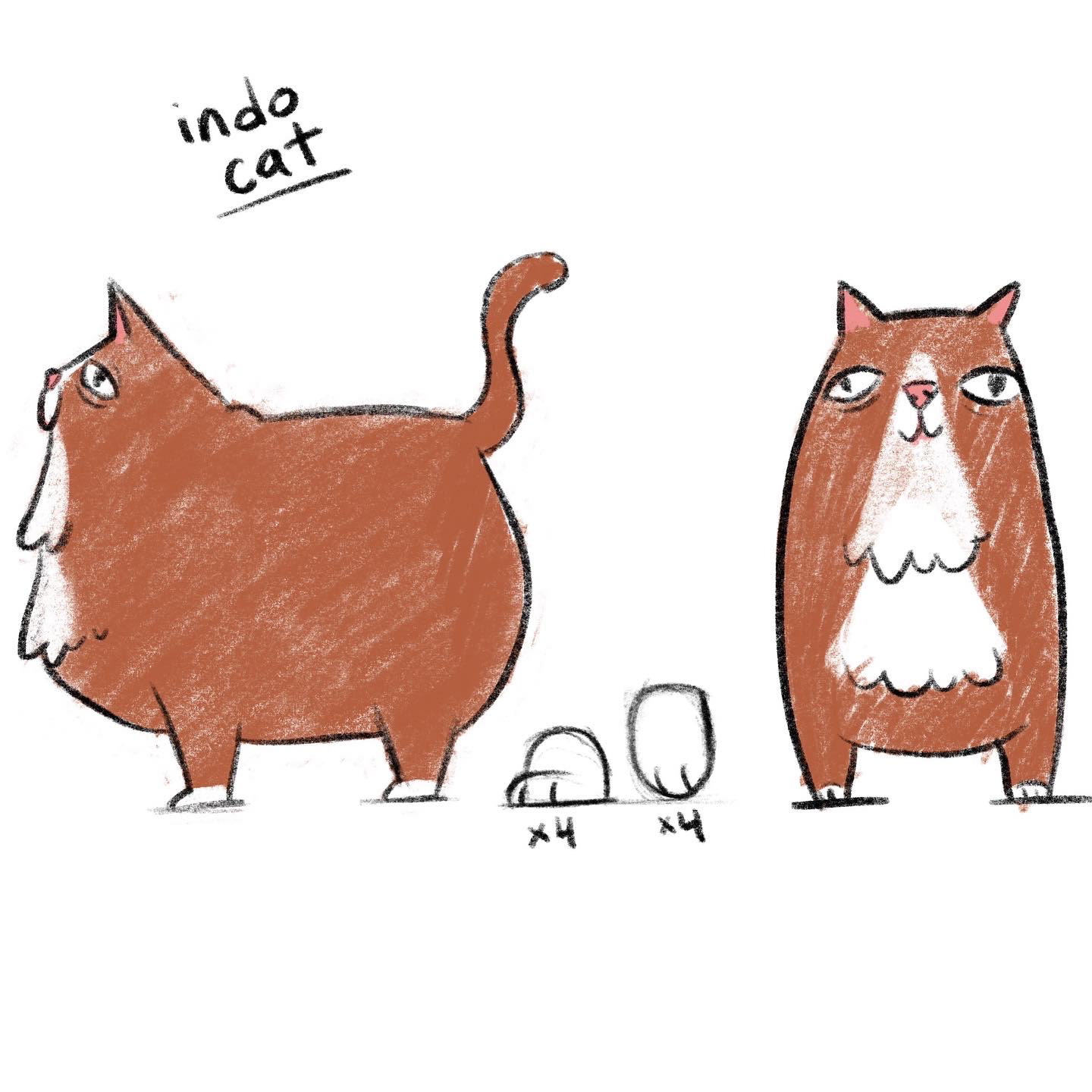 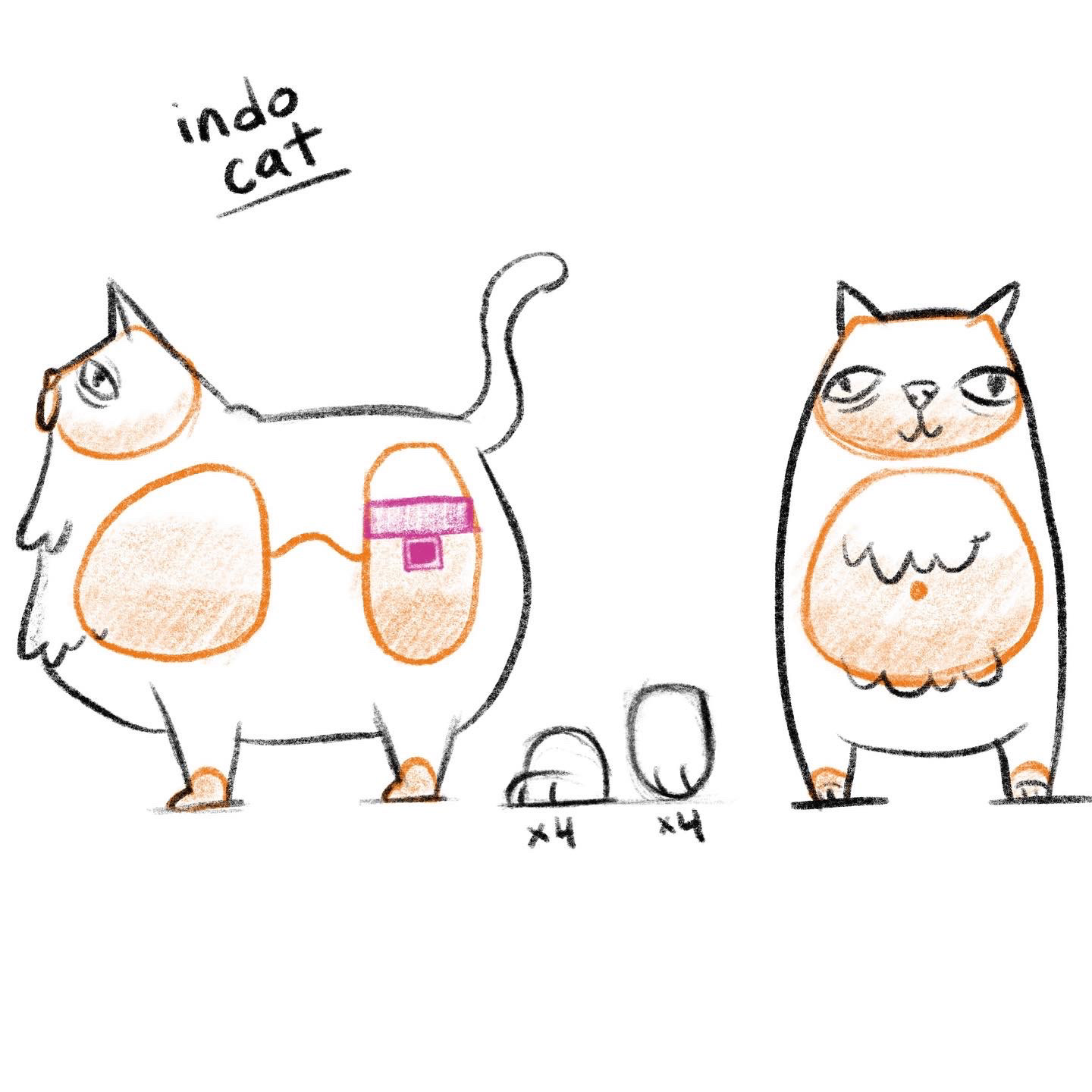 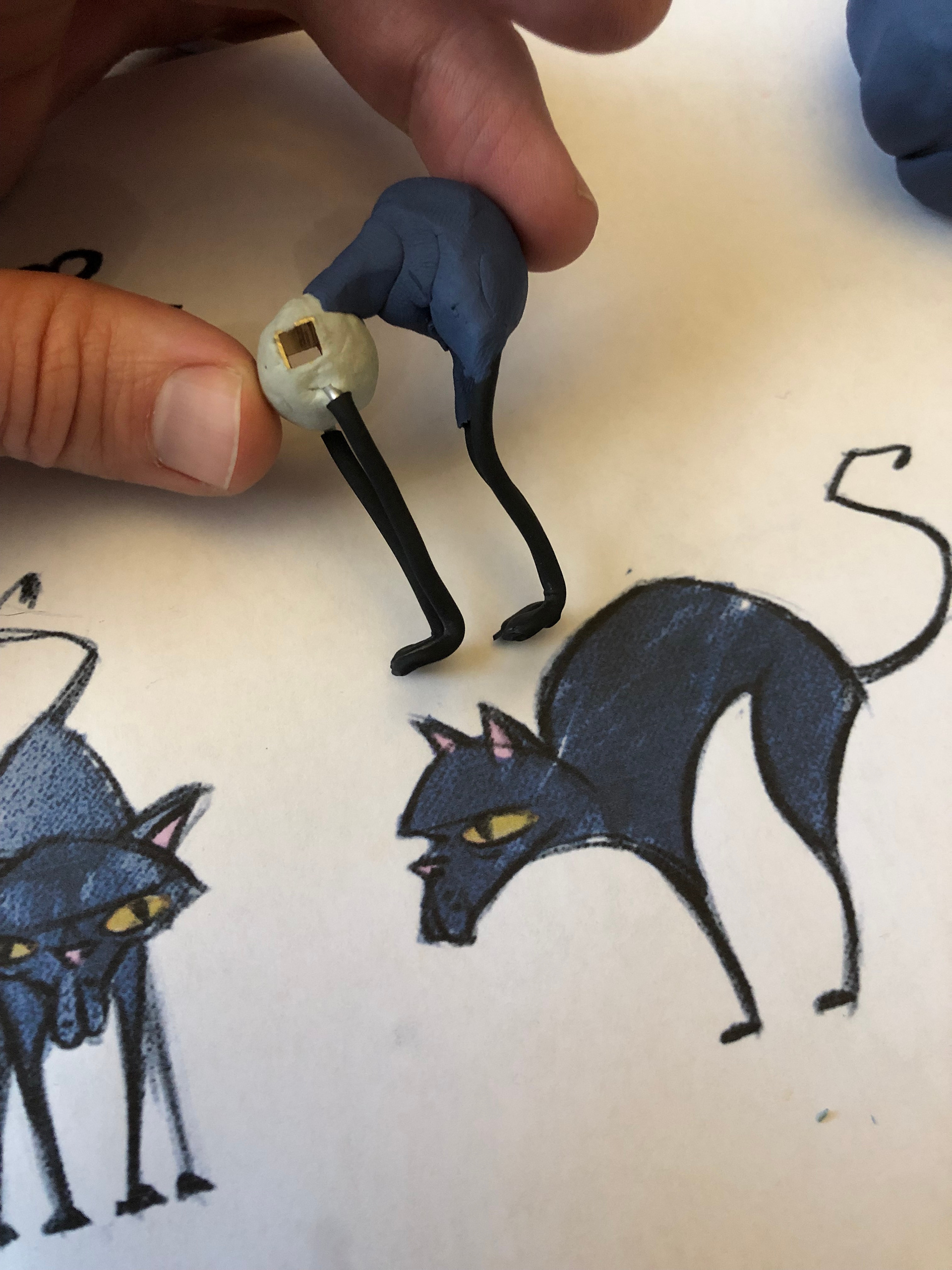 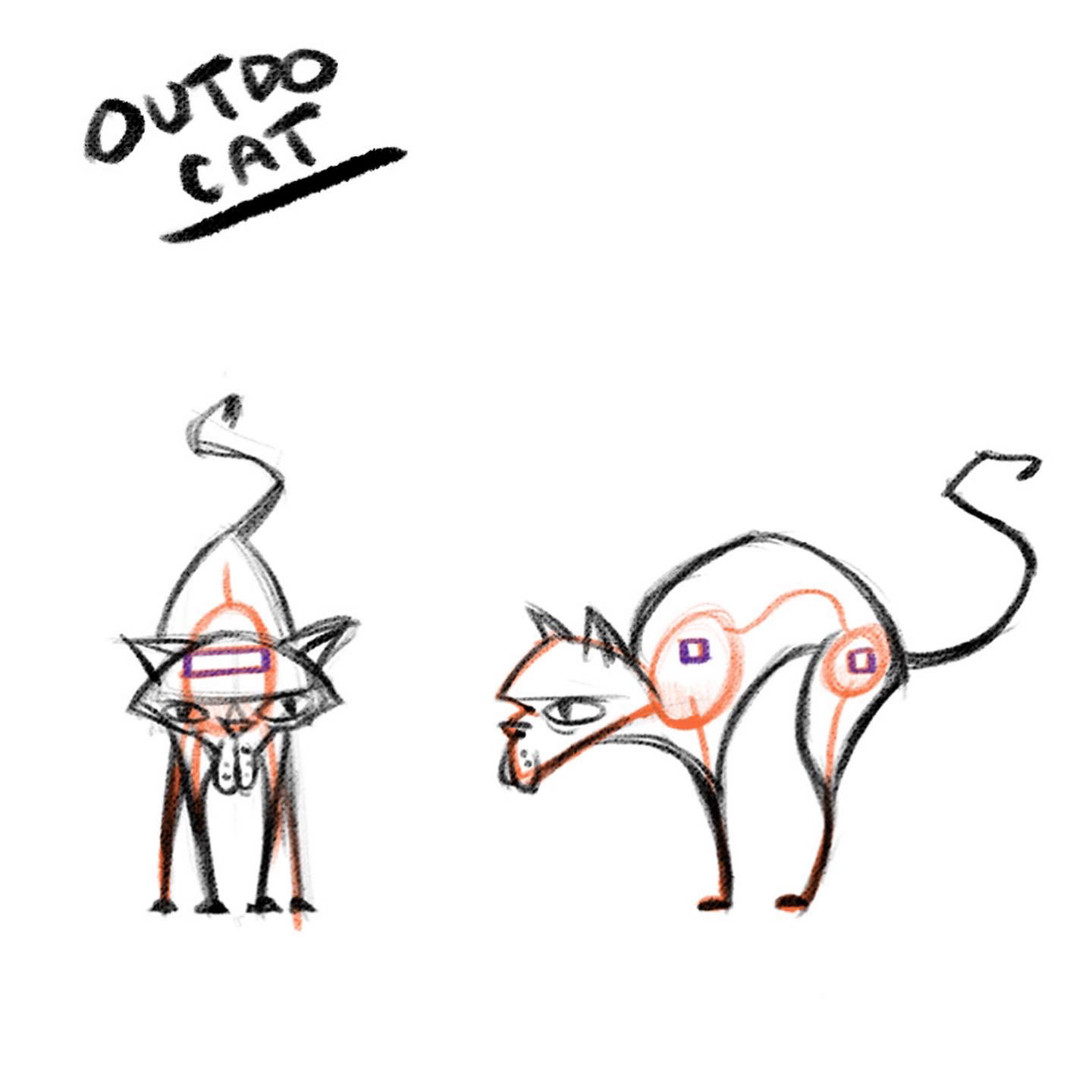 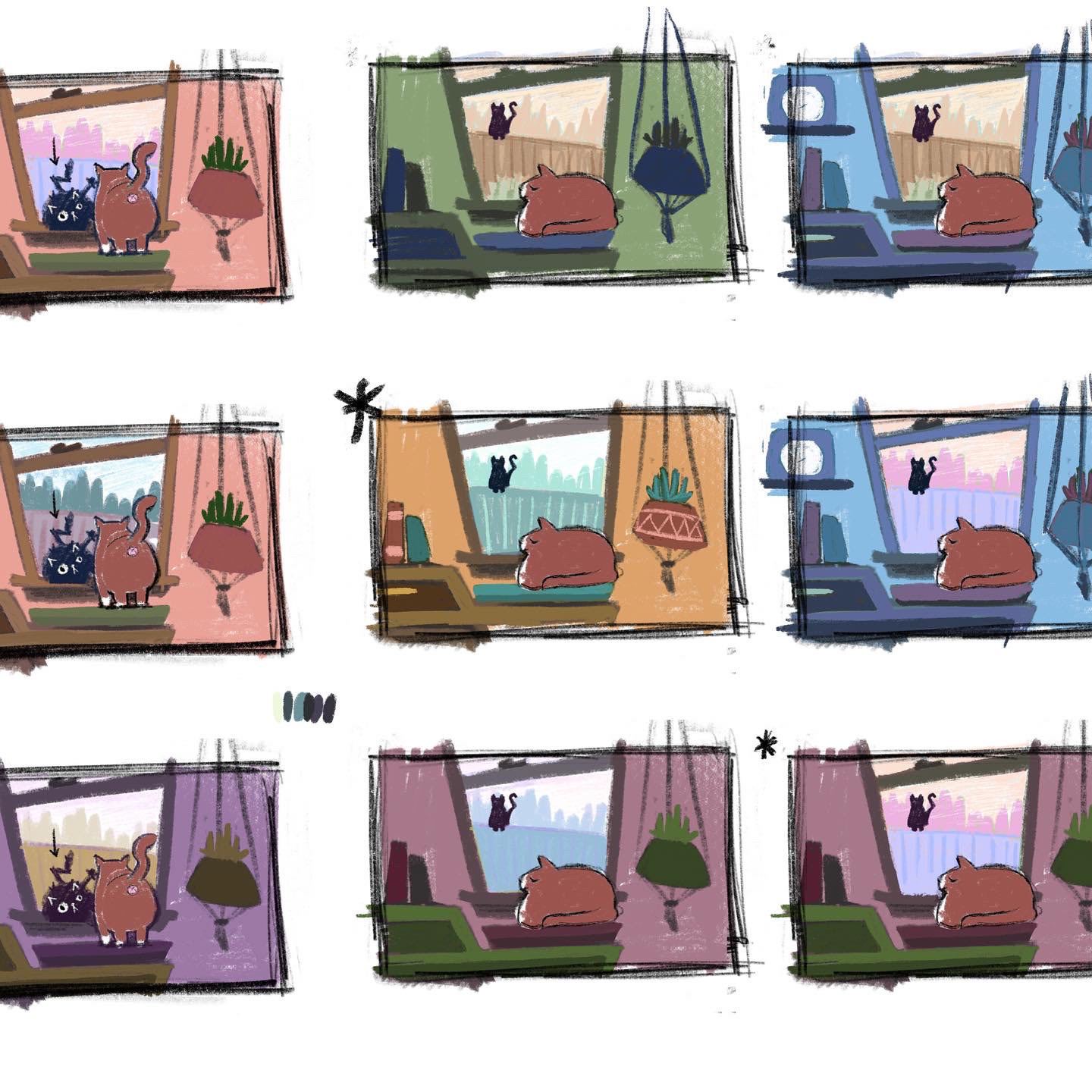 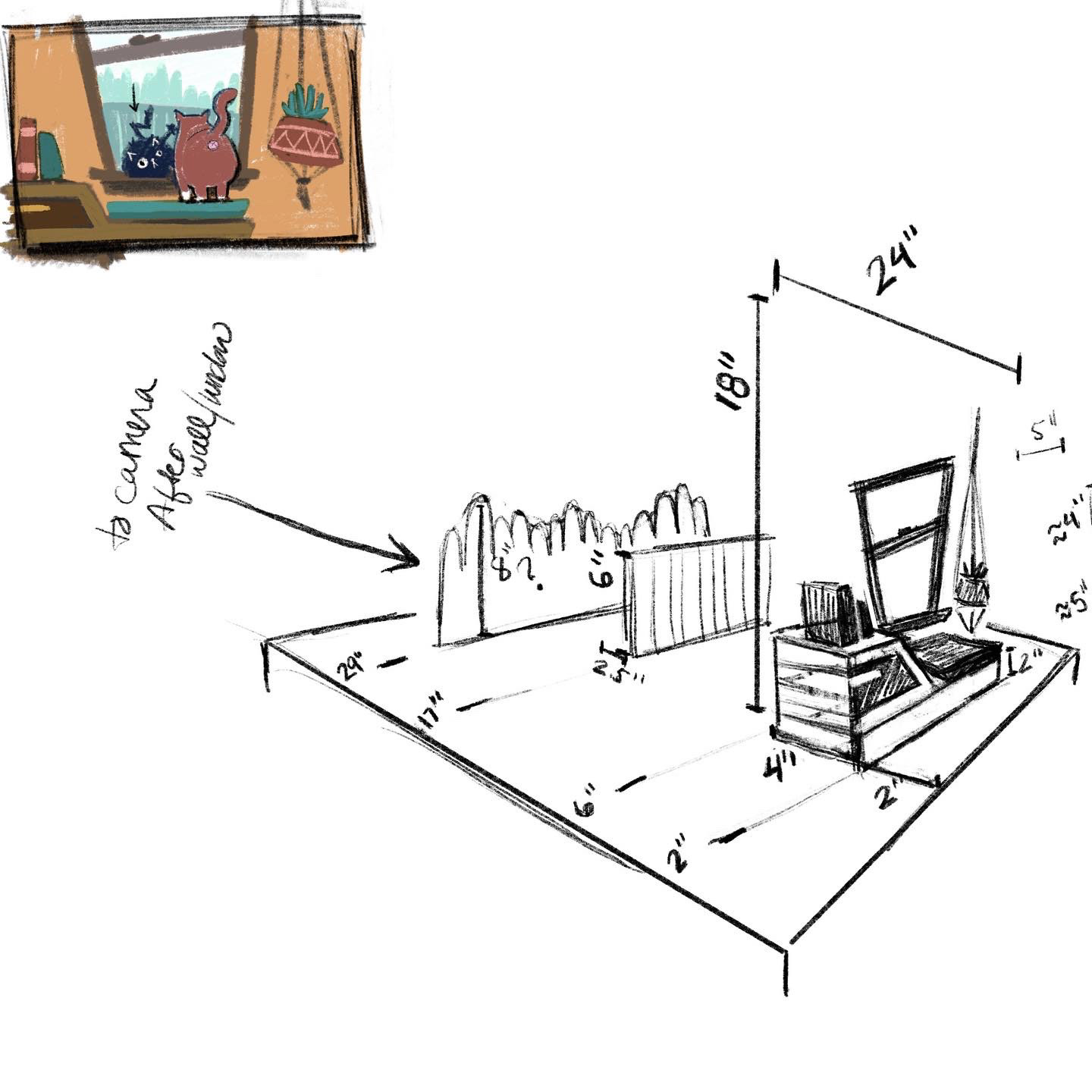 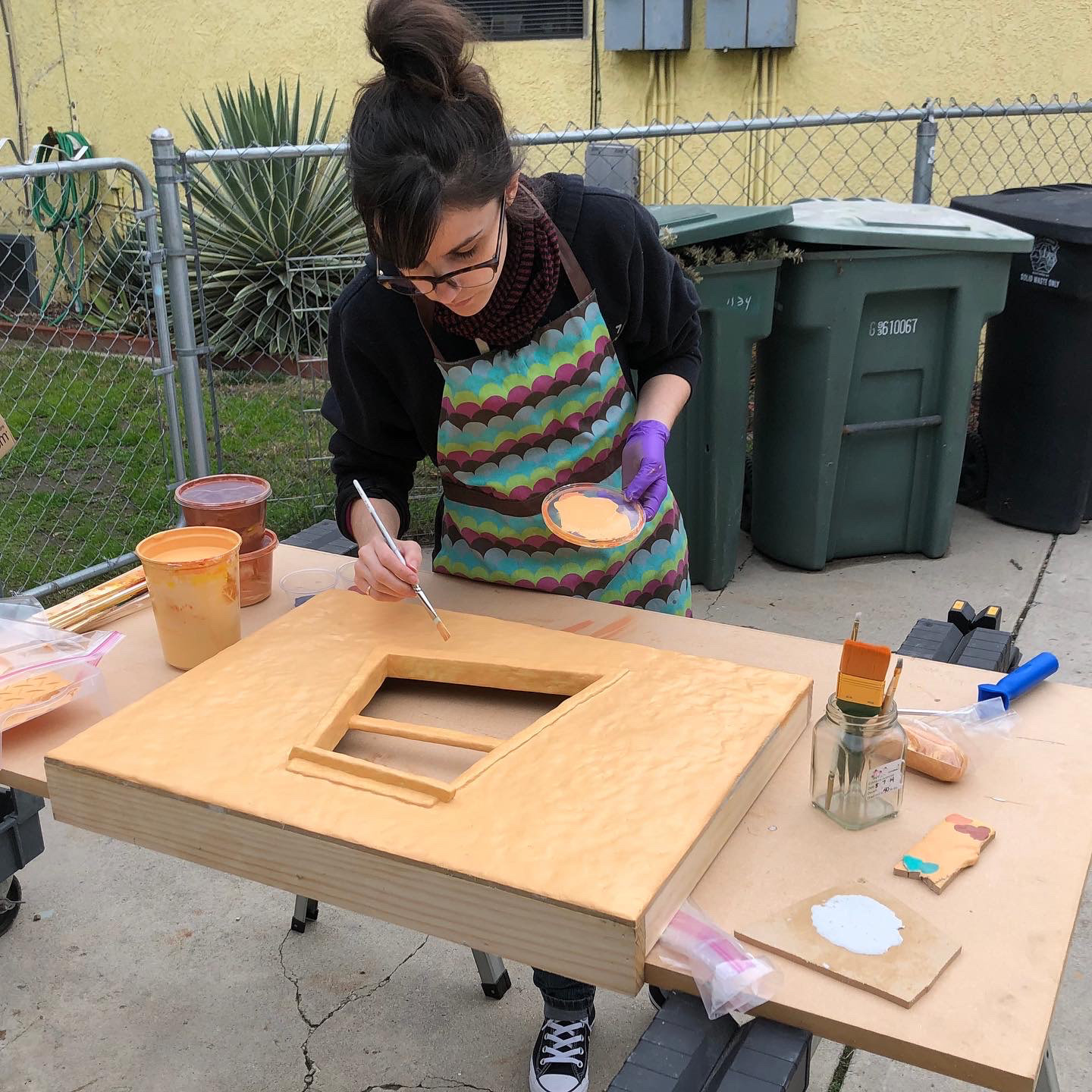 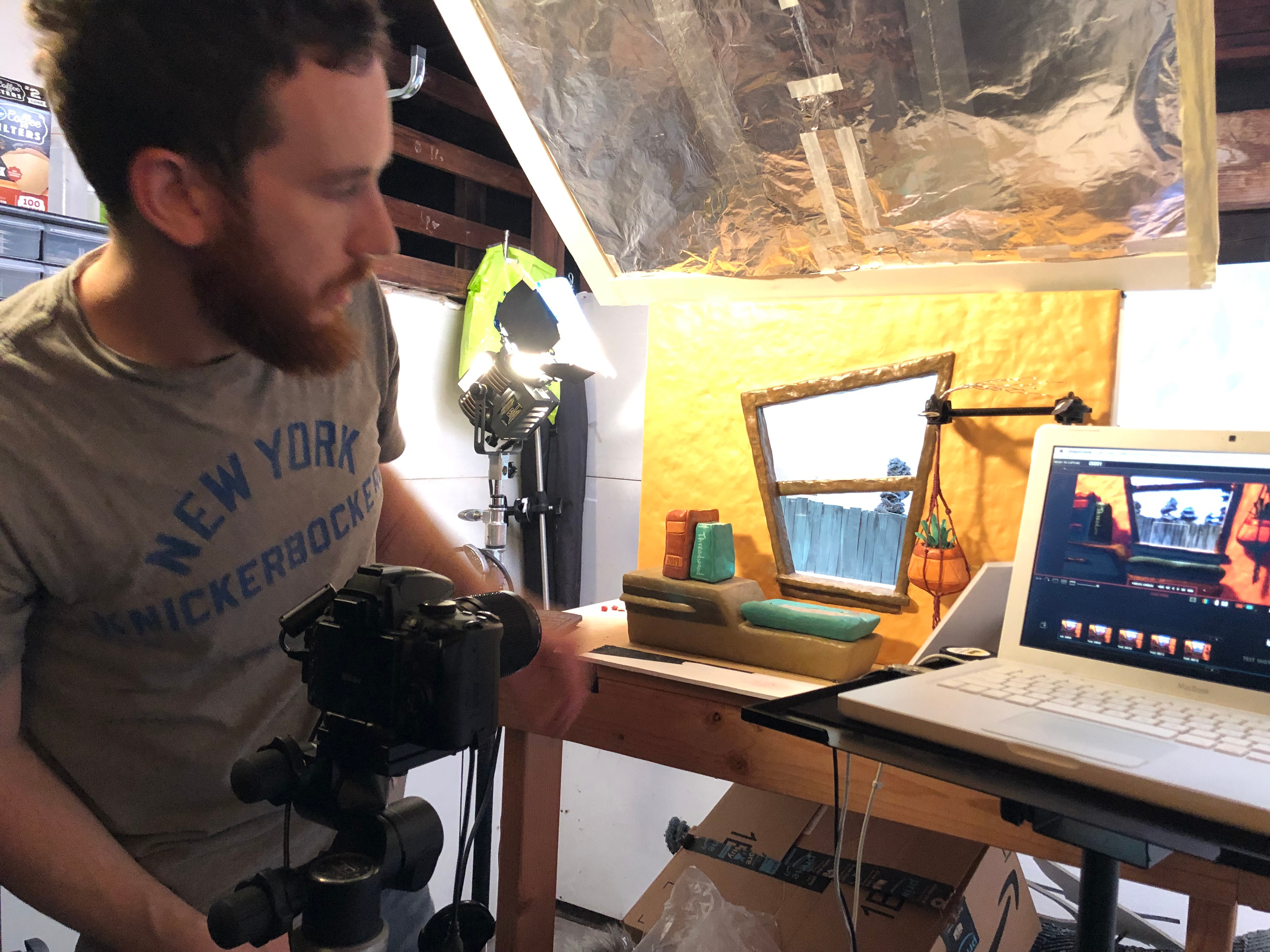 Director / Animator @aqueldelotroladodelcero , shared a bit about the process of making of "V. Knock Knock (i'm coming for for)" :⁠
⁠
"MY FIRST NIGHTMARE EVER⁠
Yes indeed, this is the first nightmare I have recollection of. It happened when I was around 5 years old, the night after y begged my dad to buy an artisanal puppet on the street. It seems this child changed his mind on that compulsive purchase...⁠
ANIMATED CATHARSIS⁠
The main idea for this series of oneiric horrors comes from the need to communicate this interiorized nightly freakouts the best way i could. I’m always short when it comes to words, so what a better way than to turn them into animations?"⁠
———

2:27 Duora
Directed By: Pedro Navarrete
Animated By:
Pedro Navarrete
María Ignacia Hargreaves
Teresa Romo
Art Direction: Teresa Romo
Sound Design:
Pedro Navarrete
María Ignacia Hargreaves
Edited by: Pedro Navarrete
Instagram Handles:
@pedro_navarrete
@theclaytower
@teresaromo
@stoodio16
Animation Wild Card presents, @Stoodio16:⁠⁠
Pedro Navarrete - @pedro_navarrete⁠
María Ignacia Hargreaves - @theclaytower ⁠
Teresa Romo - @teresaromo ⁠
⁠
"We are Stoodio16, an animation studio based in Santiago, Chile.⁠ ⁠
⁠
We have been collaborating together for a couple of years, making short films like “Shy & Ketchup” and some claymation video clips for local bands. Each of us has his own speciality while animating, Pedro does 3D modeling, Maria Ignacia does stop motion in her own The Clay Tower and Teresa does mostly 2d animation. But we really like to get together and do stop motion from scratch, like this little project for Animation Wild Card.⁠
The idea of Duora was born during isolation, dreaming of outerworlds.⁠"⁠

The Creators from, @Stoodio16 , shared a bit about the process of making their short "Duora" :⁠⠀
⁠⠀
"We decided to create everything on the set and characters separately. So we basically created some kind of collage animation.⁠⠀
We built everything on clay and took different pictures of each set element based on our storyboard.⁠⠀
Our characters and UFO were also made and animated separately, to fully focus on expressions and movements. And then Pedro was the one who had to put it all together on post production.⁠⠀
⁠⠀
To animate Duora, our 2 headed beast, we created two models on different scales. A full-body-one on medium size for our Long Shots that was animated roaring, walking and moving, and a bigger one (that was mainly their heads and front) for our Medium Close Up, to be able to replace their tongues and eyes and get a more detailed animation on the bite moment.⁠⠀
⁠⠀
Our little 3 eyed monster named Kurik was just one scale, but we built two bodies for him, one to animate the jump till it got squashed, and the other one for his standing pose, we also created replacement eyes and mouths for him.⁠⠀
⁠⠀
The psychedelic part was animated in a different way, where we decided to illustrate each frame with clay.⁠⠀
The sky was similar but it was just one illustration on which we created a texture animation by moving the clay around and taking different photos to give the cloud moving sensation."⁠⠀ 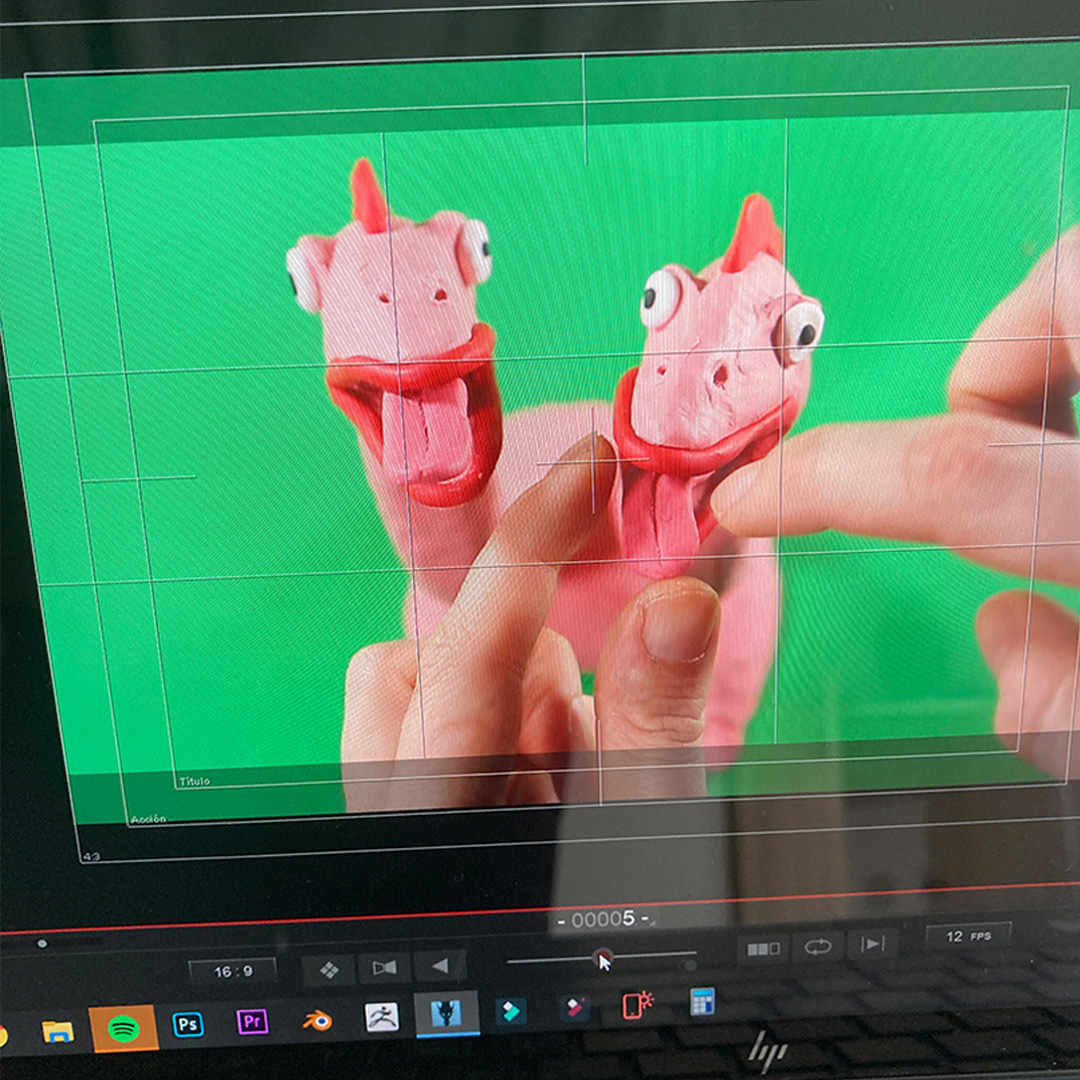 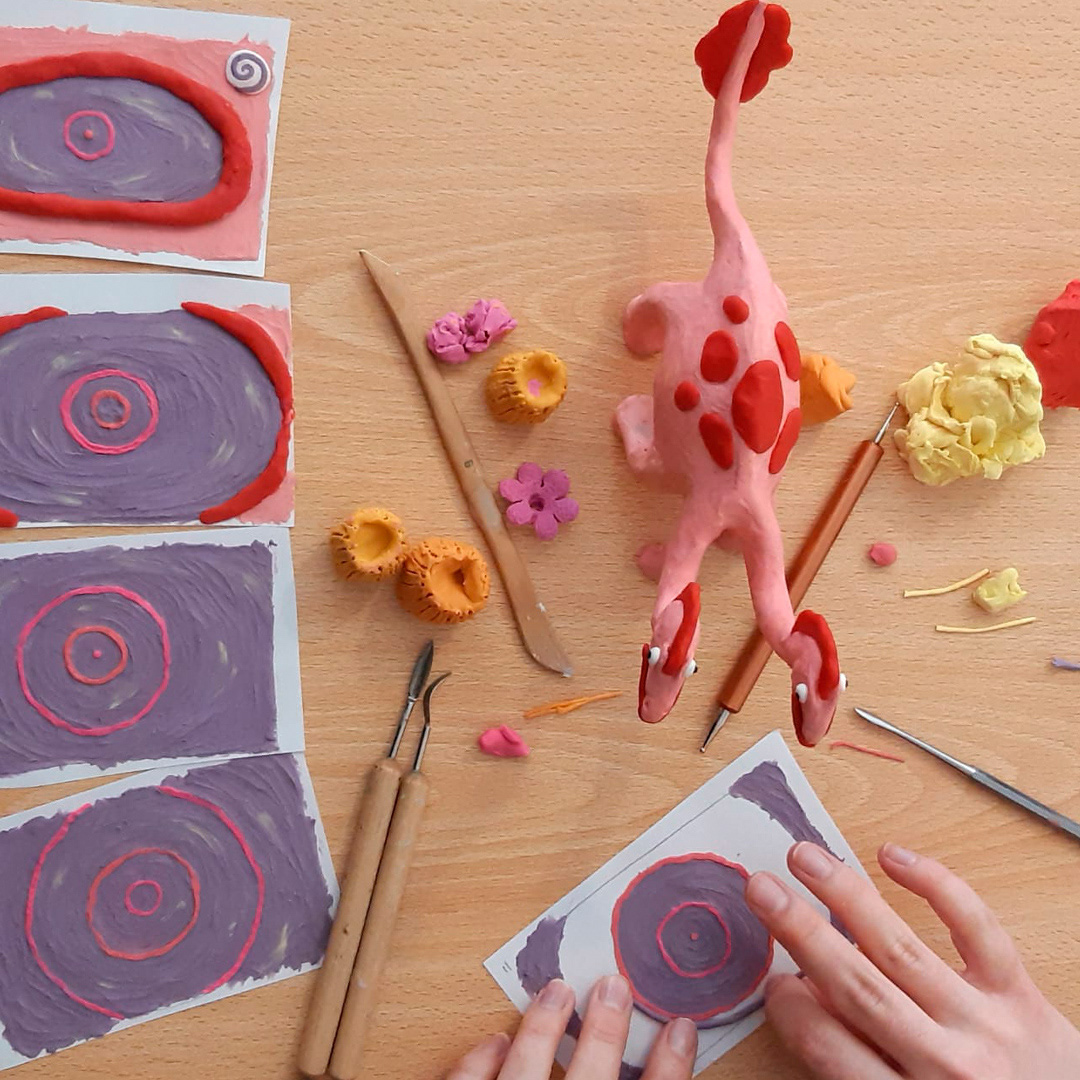 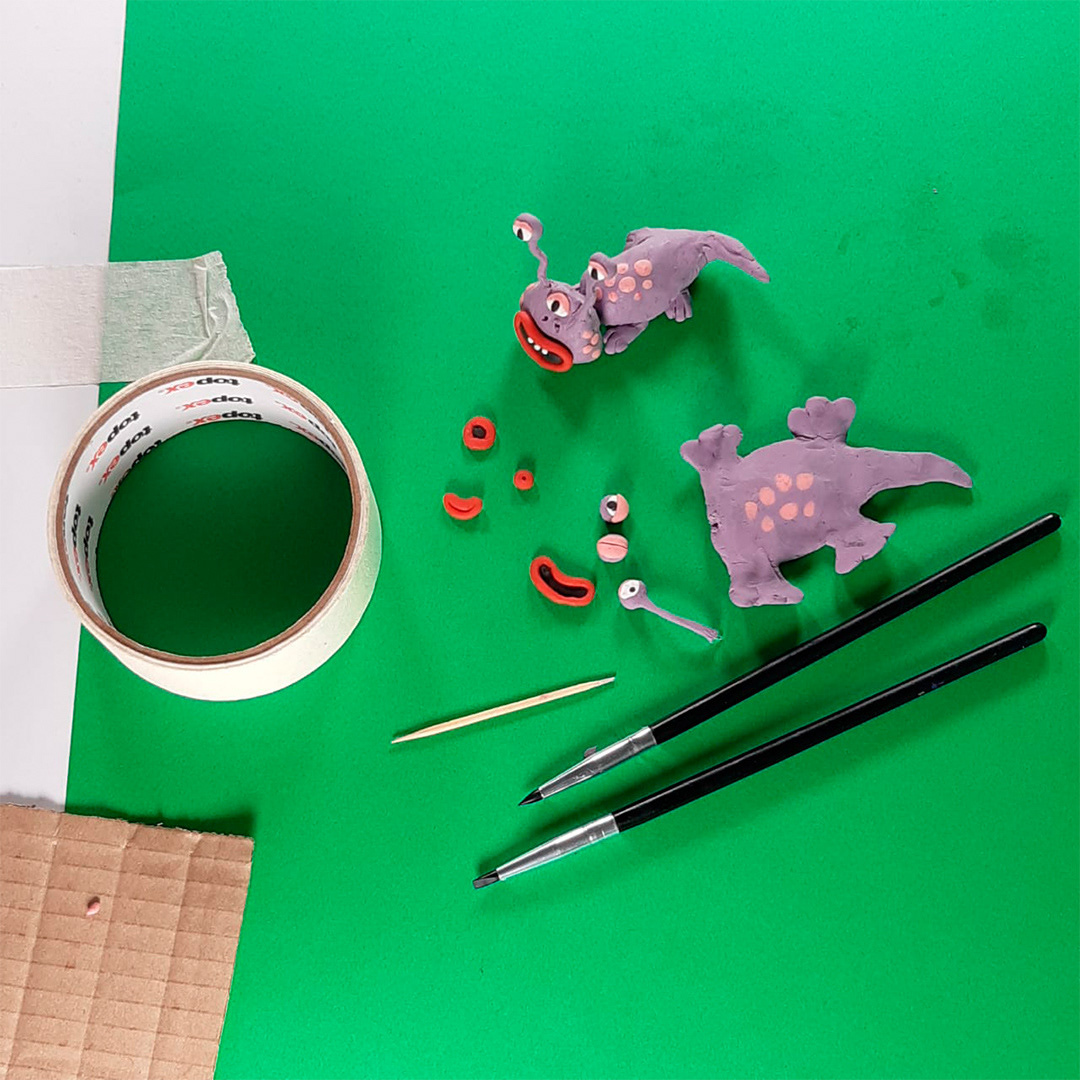 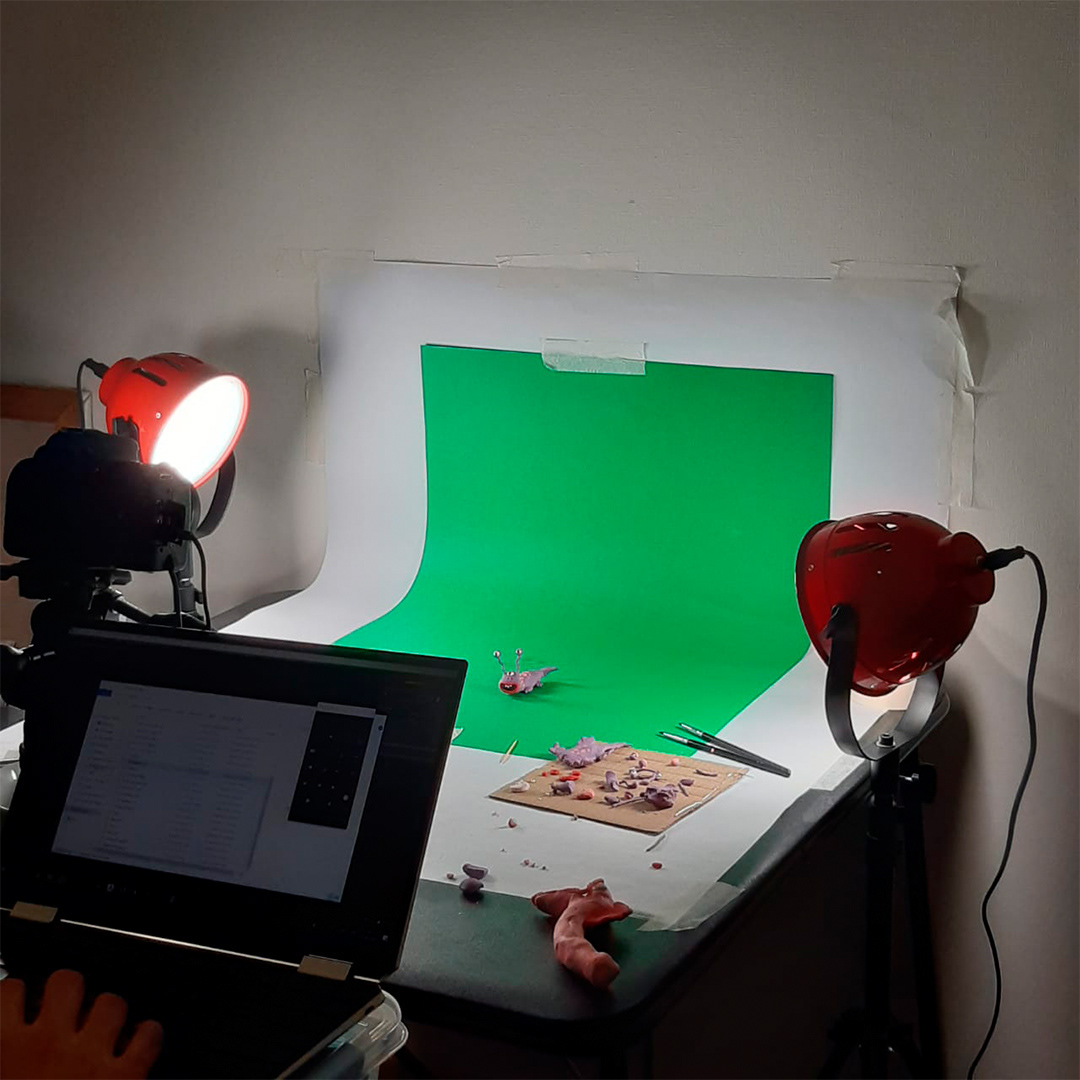 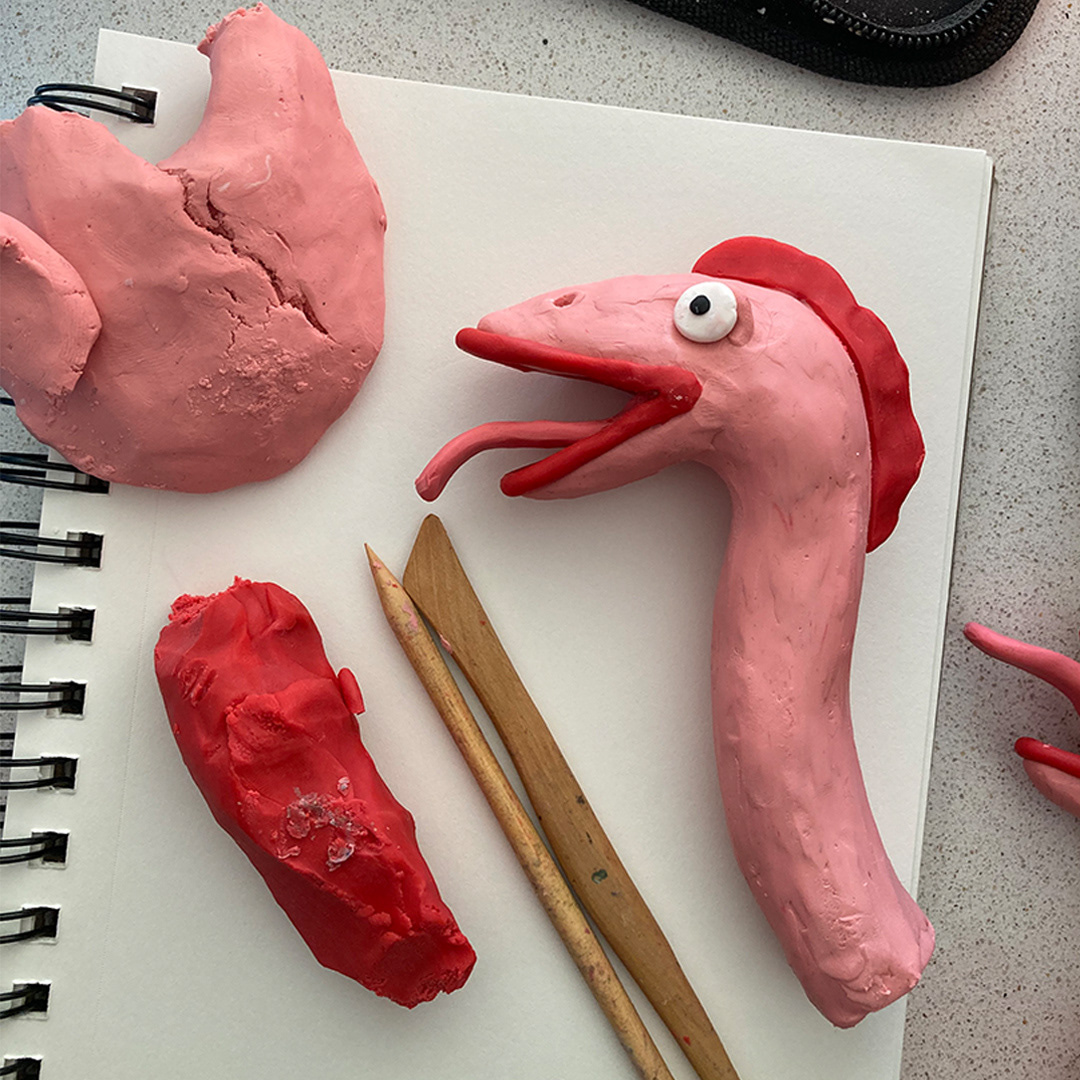 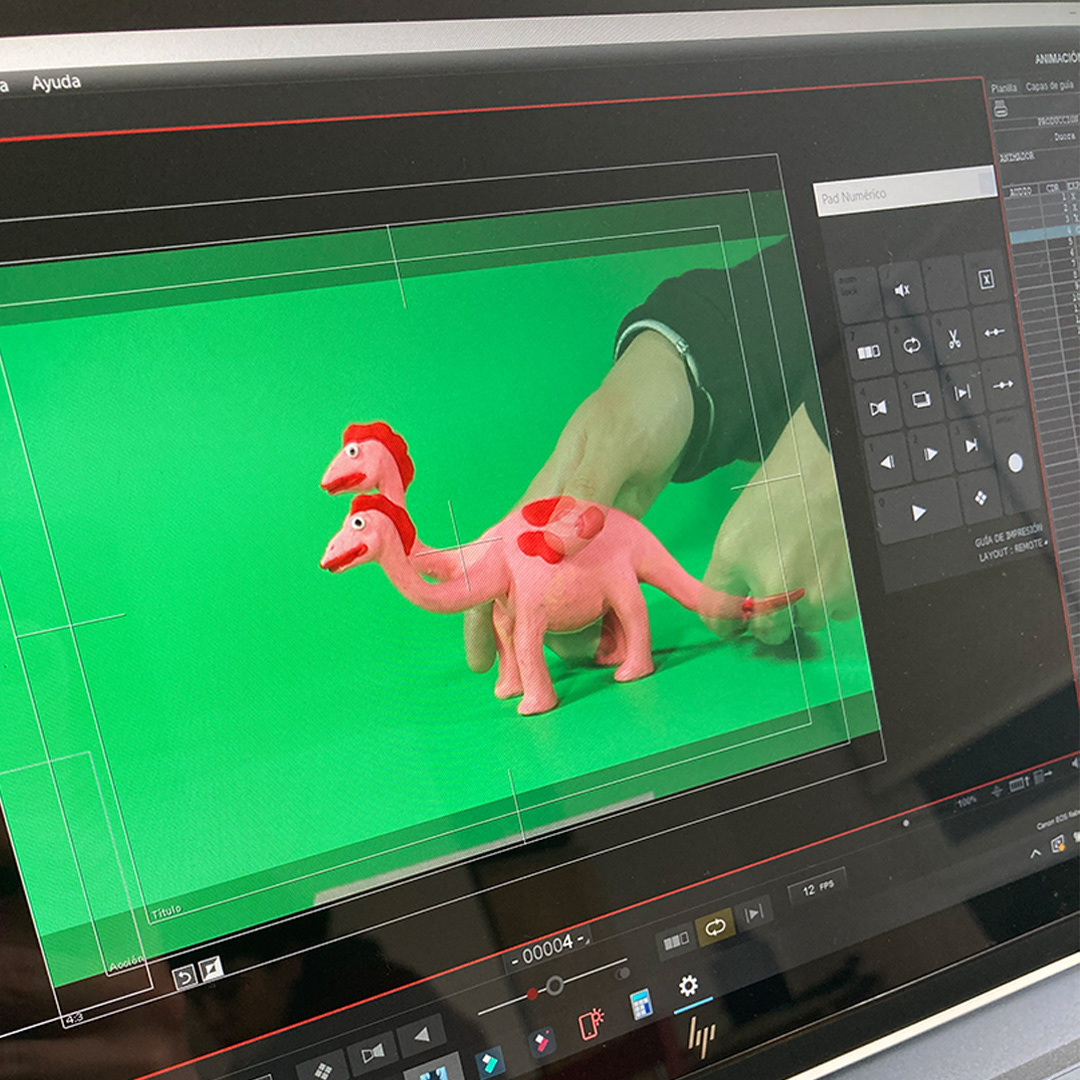 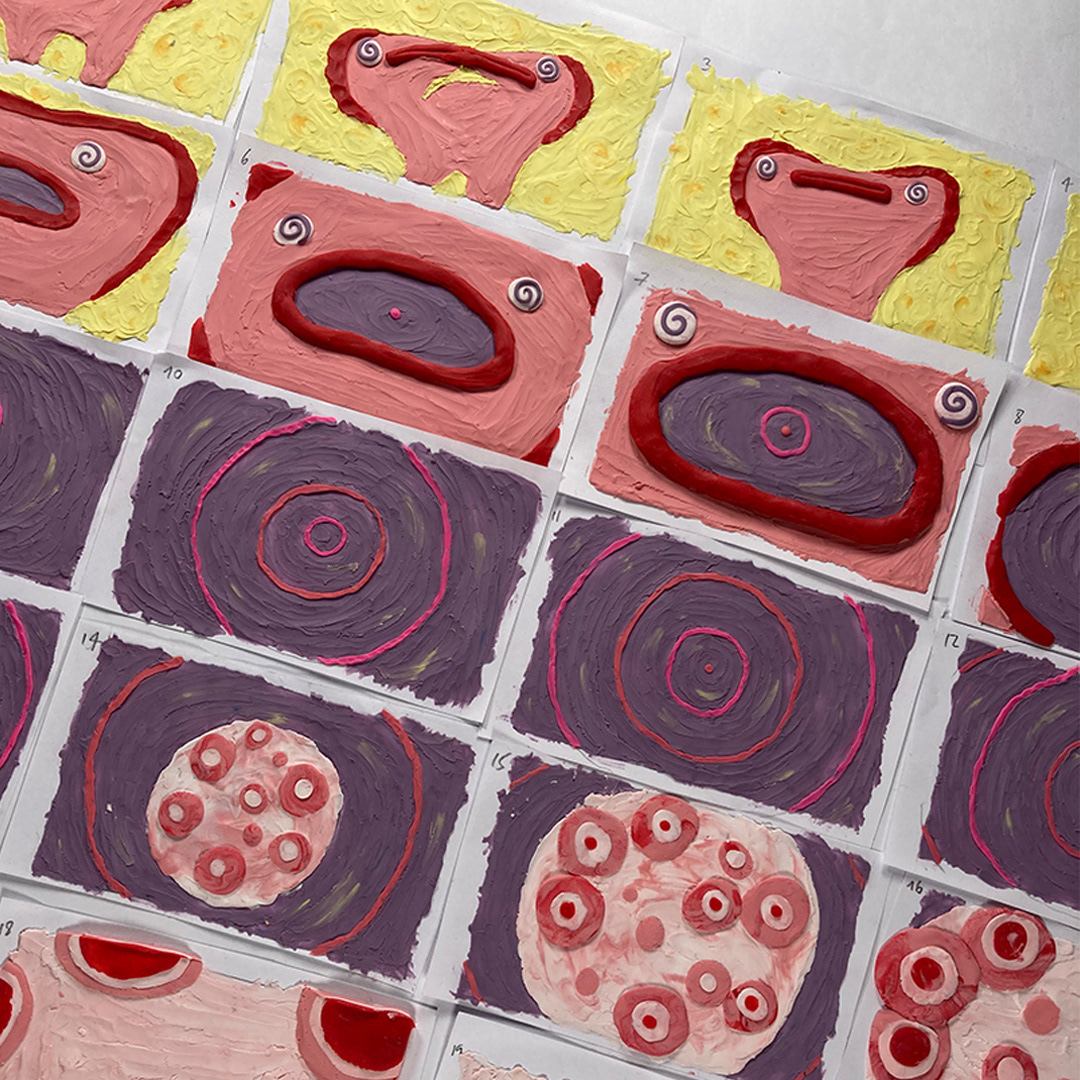 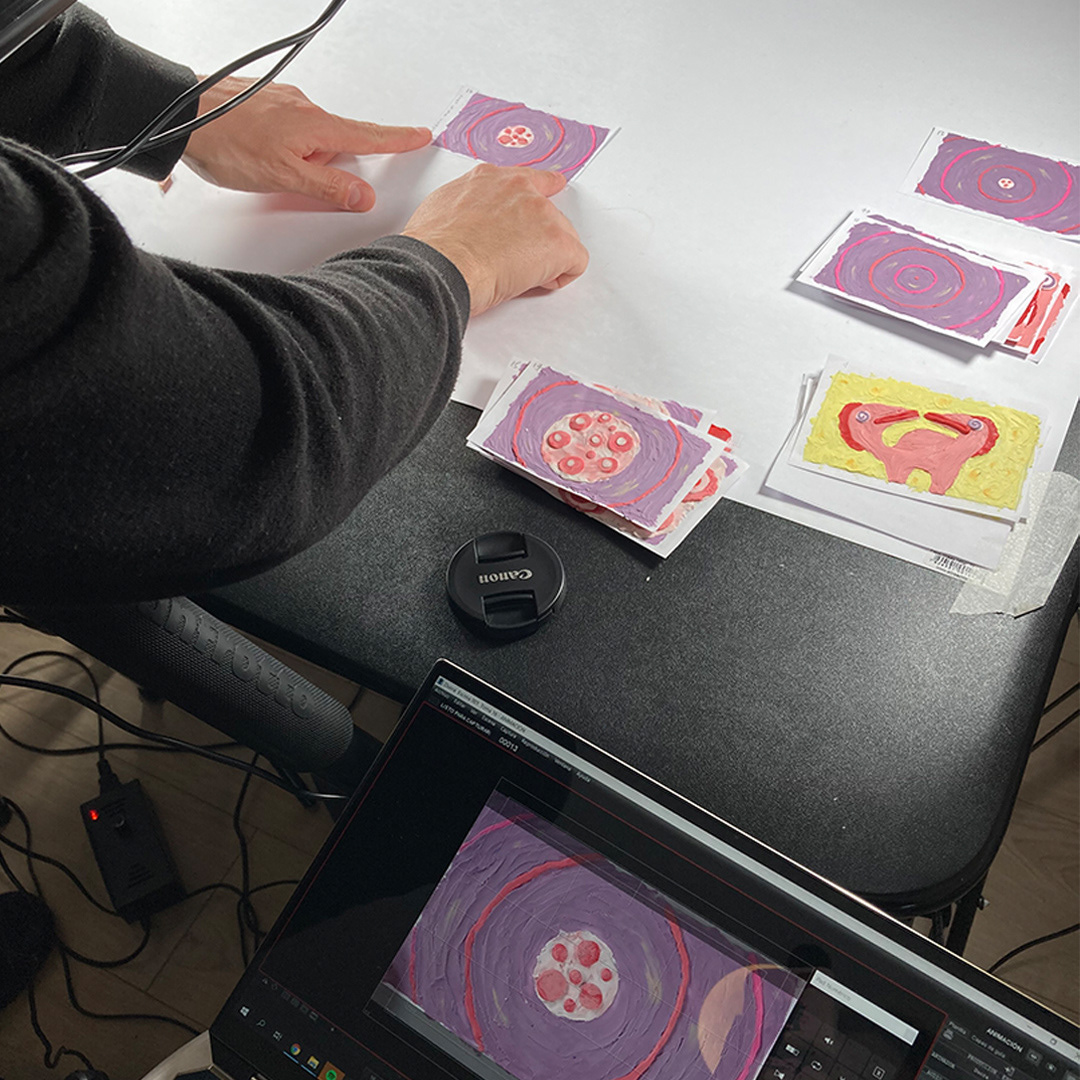 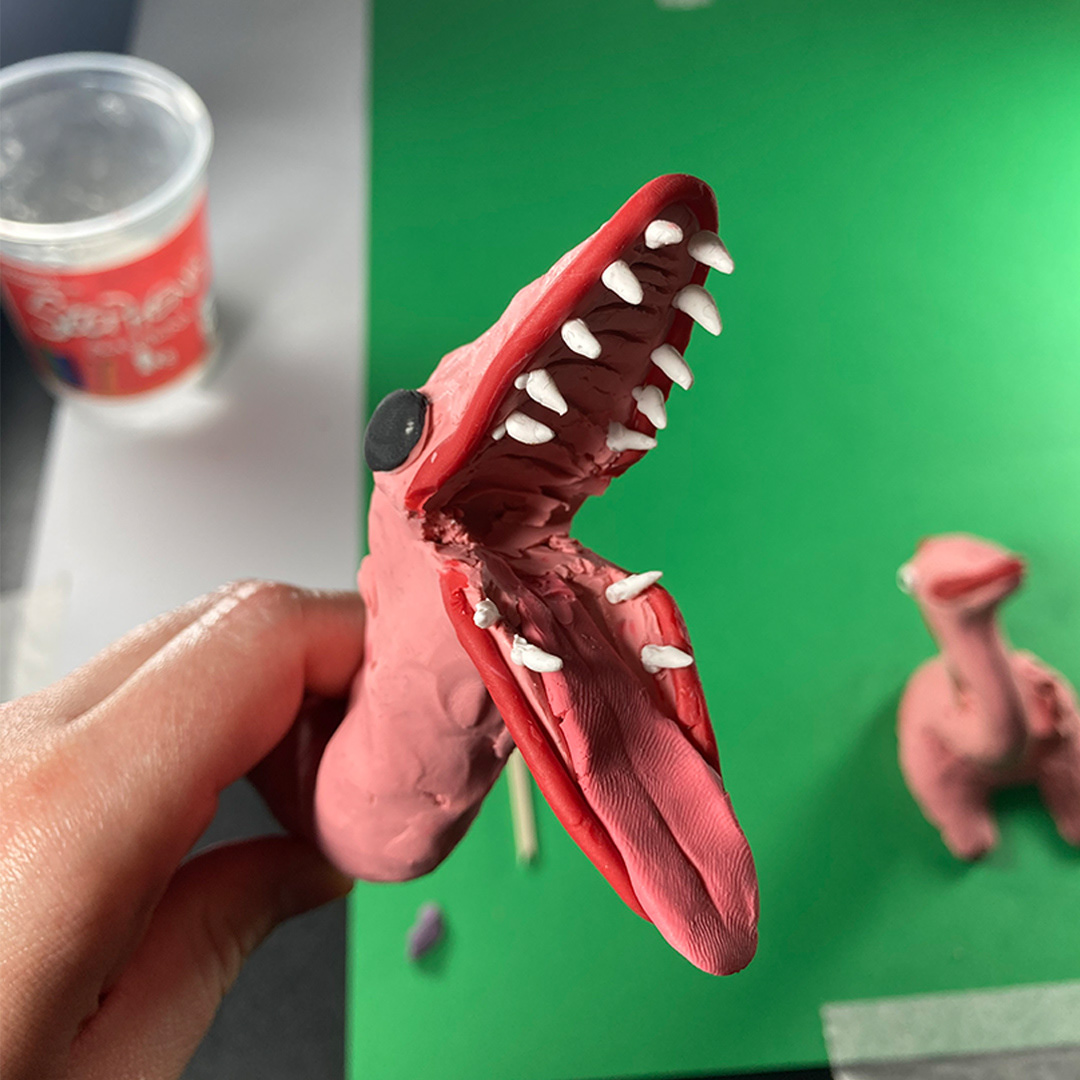 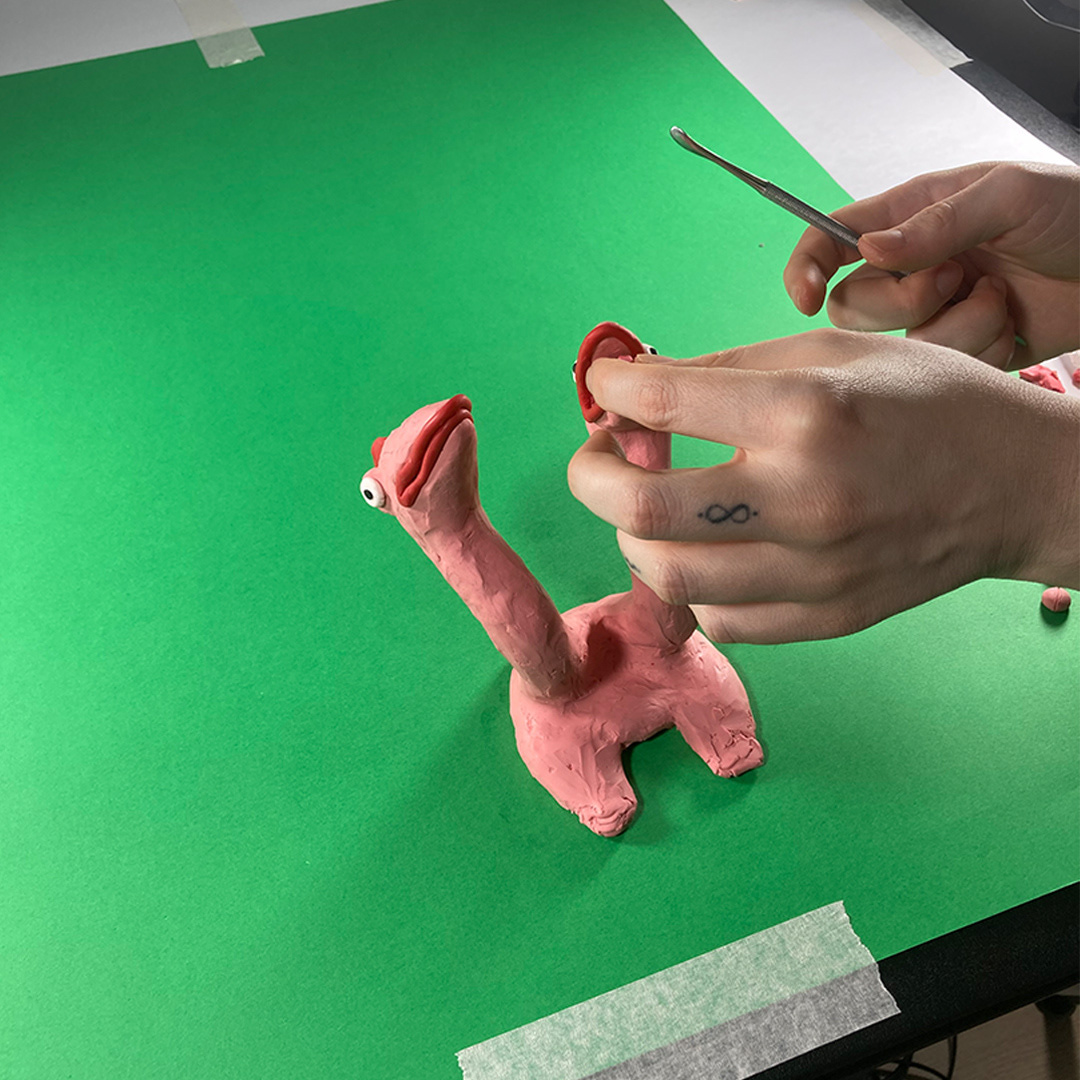 3:27 Eli in A Kraken Good Time
By: John Sumner
Website: johnsumnerdesign.com
Voice Characterization: Justin Michael
Website: heyjustinmichael.com
Instagram/Twitter: @heyjustin
Music: The Melwood Orchestra
Conductor/Trombone: Eli Gunnell
Flute: Gunnar Sumner
French Horn: Laurel Gunnell
Saxaphone: Henry Gunnell
Flute/Piano: Kaden Sumner
—
Animation Wild Card presents, John Sumner :⁠ ⁠⠀⁠⠀⁠⠀⁠⠀
⁠⠀⁠⠀⁠⠀⁠⠀
"John Sumner spent most of his young life as a journeyman, traveling across the country and working a ton of odd jobs. Ultimately, all of these experiences would come in handy as he settled into the entertainment industry in Los Angeles, CA. ⁠⠀⁠⠀⁠⠀⁠⠀
⁠⠀⁠⠀⁠⠀⁠⠀
For the past decade, John has been primarily working as a Production Designer/Art Director/Builder for Film, Television, and Internet Content, with a focus on stop-motion.⁠⠀⁠⠀⁠⠀⁠⠀
⁠⠀⁠⠀⁠⠀⁠⠀
When John isn't working on professional jobs, you can usually find him carving tikis, drawing comics, and trying not to get his butt kicked by his wife and kids in Tae Kwon Do.⁠"

Creator, John Sumner , shared a bit about the process of making "Eli : in A Kraken Good Time" :⁠⠀⁠
⁠⠀⁠
"This episode of Eli is an homage to my father. ⁠You know how ancient greek stories are used to describe traits and complexes in human nature? ⁠Well, in college I wrote a paper called the Odysseus Complex, and then profiled my dad... rightfully so. ⁠He's this extremely intelligent, charismatic man that's still continuing to lead an extraordinary life. A lot of which involves boat trips to exotic places around the world. ⁠
Artistically speaking, this episode of Eli attempts to recreate the whirlwind nature of those adventures. That sense of the adventure almost ending before it's begun. ⁠Looking back on it, I would definitely change the timing on things. However, like those few adventures I was able to be a part of, it's in the past and I'm moving on."⁠⠀⁠
———
Thank you for viewing Episode 9 of Animation Wild Card!
↑Back to Top