From the creators and contributors of AWC, Happy Holidays! Check out our last episode of the year and learn more about the contributing artists below:

0:08 Magical Cat
By: Threadwood
@_Threadwood
https://www.threadwood.com/
—
As an extra Holiday bonus, Threadwood made their Magical Cat short into an hour long Yule Log on Youtube!
—
Animation Wild Card presents, @_Threadwood⁠ (individually known as @alexiseved & @sdaros):⁠⠀⁠
⁠⠀⁠
"We're a married stop-motion animation team hailing from the North East (NY state specifically). We've been collaborating and working together for over 10 years!⁠⠀⁠
⁠⠀⁠
We've been a part of many stop-motion projects, big and small, and various studios on both coasts. Scott has won an individual achievement Emmy for his animation skills, and we've both had team wins on 2 different Robot Chicken episodes as Animation Director and Art Director. Even with those freelance commitments, we've always prioritized working at home on personal projects that make us laugh.⁠⠀⁠
⁠⠀⁠
We spend a lot of our down time making weird faces/voices/dance moves at each other to try and make the other laugh - and sometimes they make for good shorts. This short series "Magical Cat" was inspired by a dumb song we sing to our cat when we get home from work (or if he emerges from another room after a long snooze). ⁠⠀⁠
⁠⠀⁠
We'd like to continue to share our sensibilities and sense of humor with anyone looking for a chuckle, or an eyeball-grabbing commercial.⁠

Creators @alexiseved & @sdaros of @_threadwood , shared a bit about the process of making "Magical Cat - Yule log" :⁠⠀
⁠⠀
"For this short we knew we needed to come up with a new set design. So, we cut out and painted props and painted a new floor. ⁠⠀
⁠⠀
We learned a lot this time because we had to buy some new hardware to control all of the miniature lights. When we ran into a few hang ups, we were able to ask some of our lighting friends what we were missing to power and program all of the small lights.⁠ Scott did a test animation for the fire shapes and decided we only needed a cycle of 6 frames animated on fours combined with the random lighting on fours. ⁠⠀
⁠⠀
We used those frames by printing them out to scale as the template to cut out the flames from clear styrene. Lex used hot glue to design the flames within the shapes. Lex also made some small wood pieces so that it was easy for Scott to swap the shapes and register them in the right place during animation. ⁠⠀ 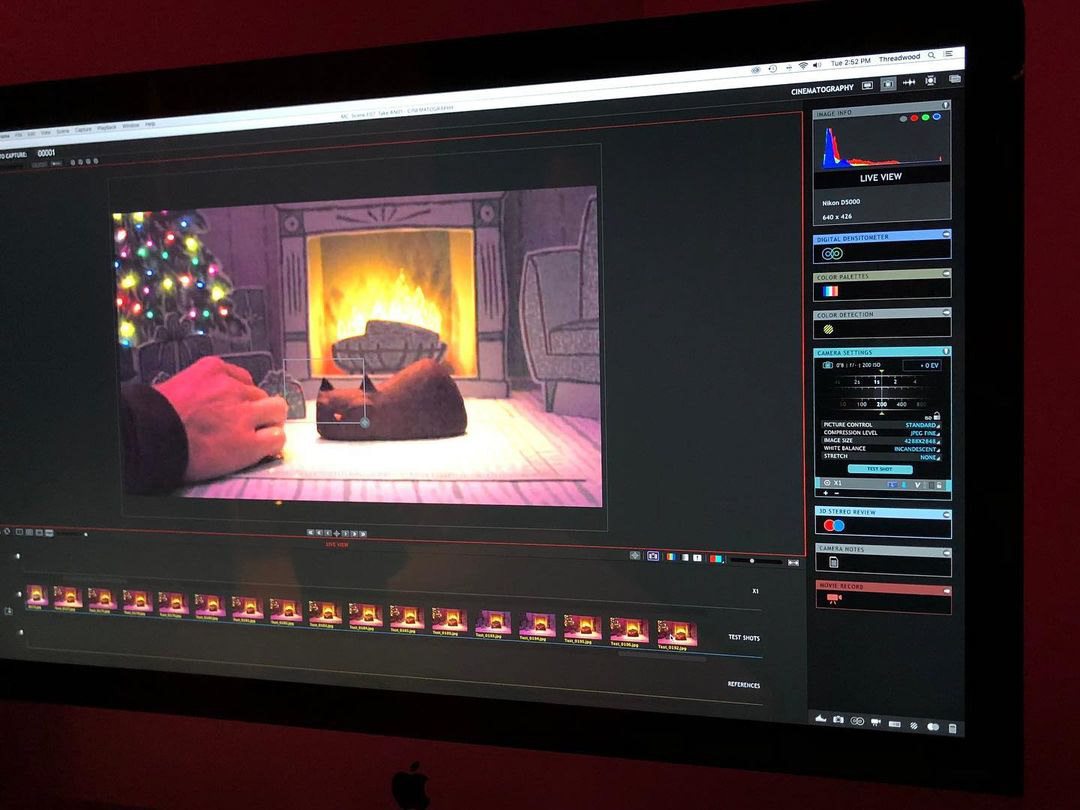 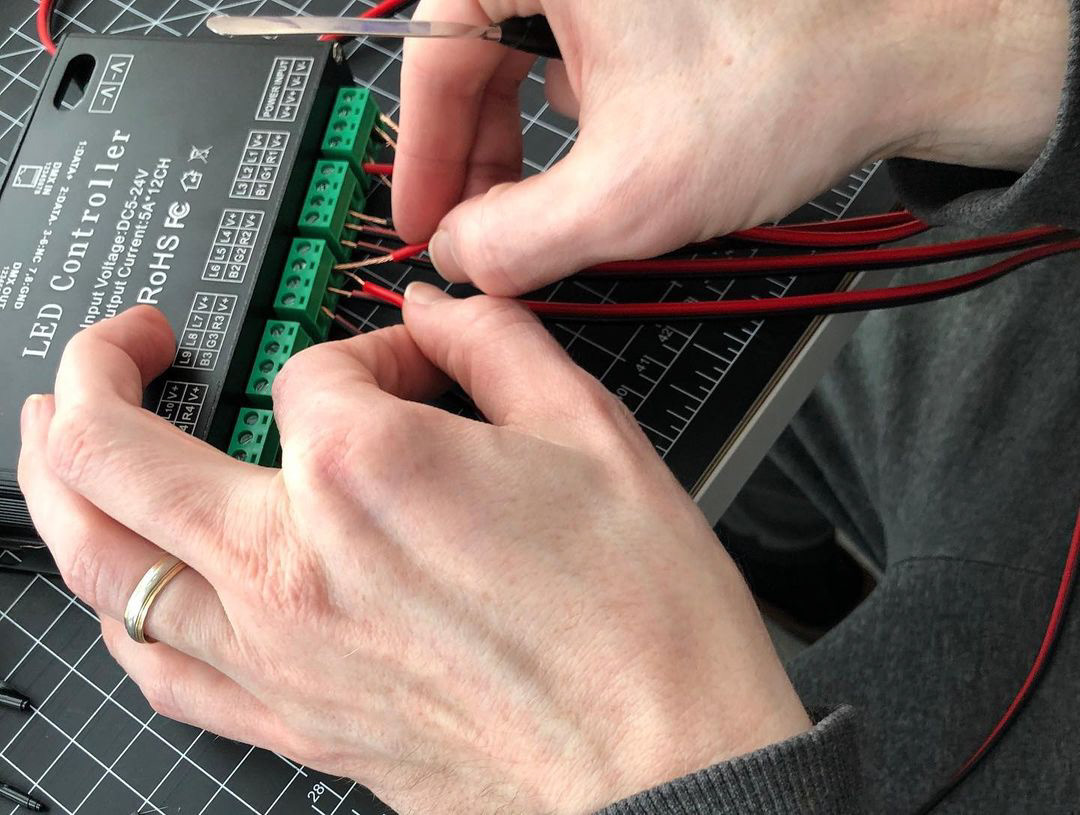 Setting up the LED Controller 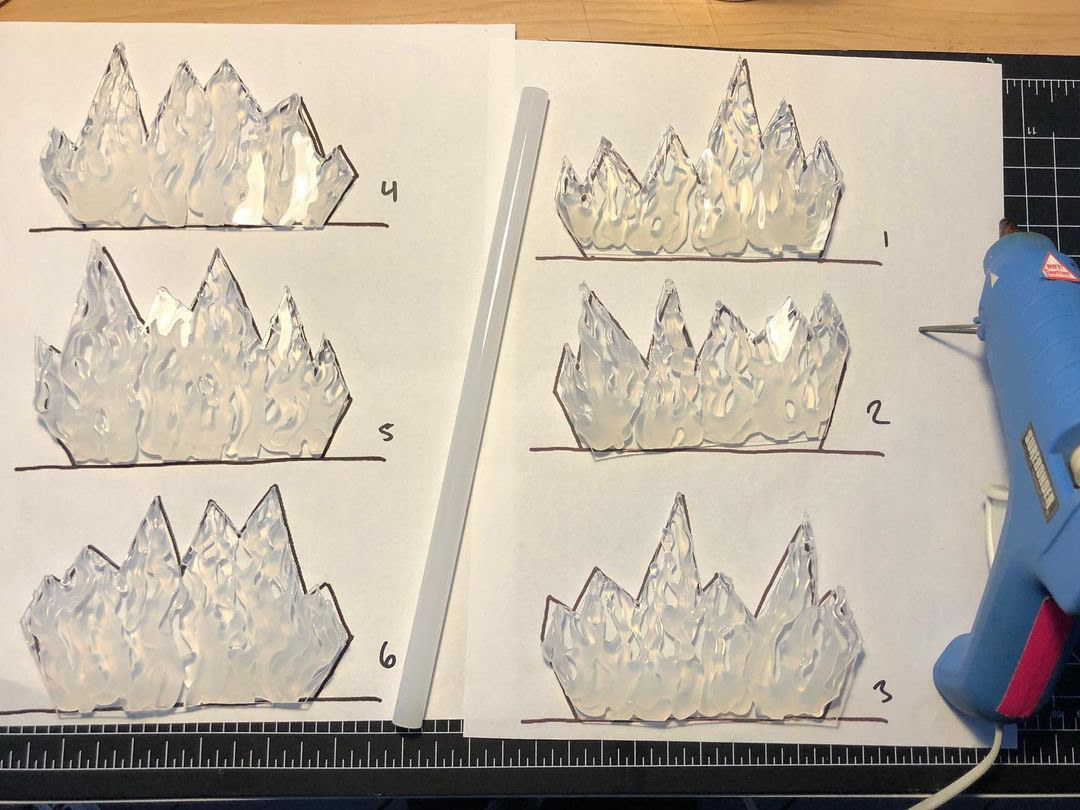 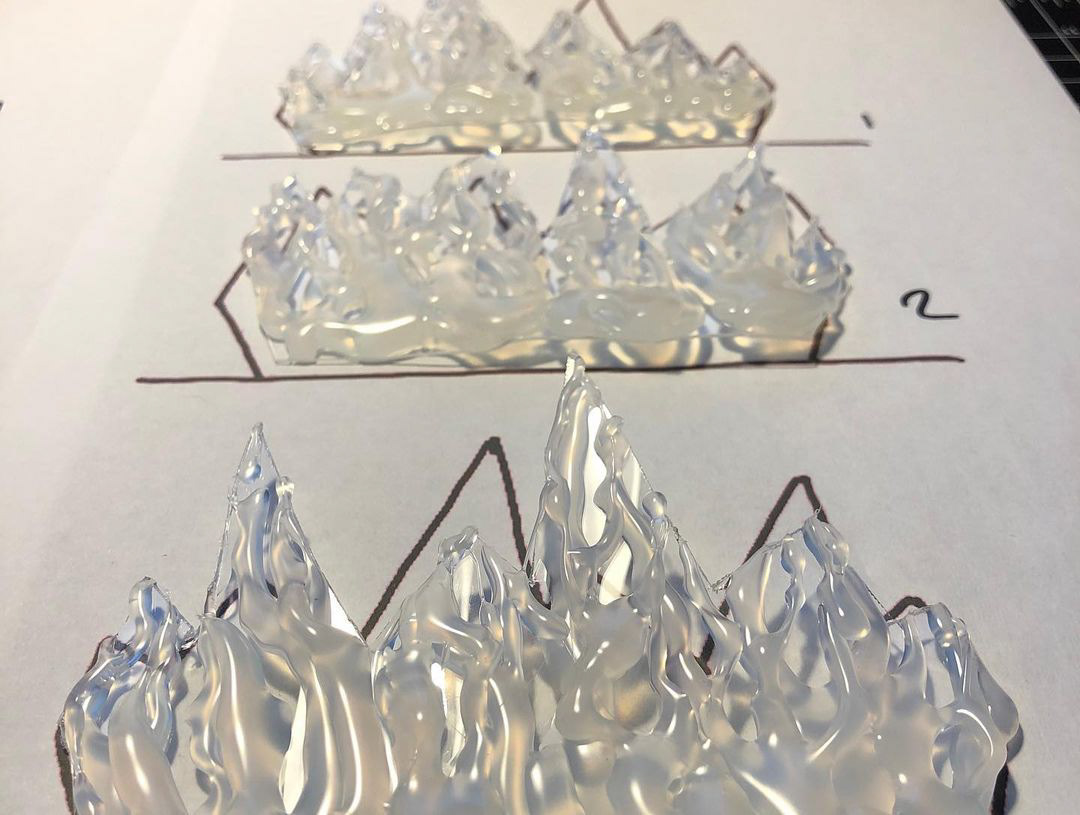 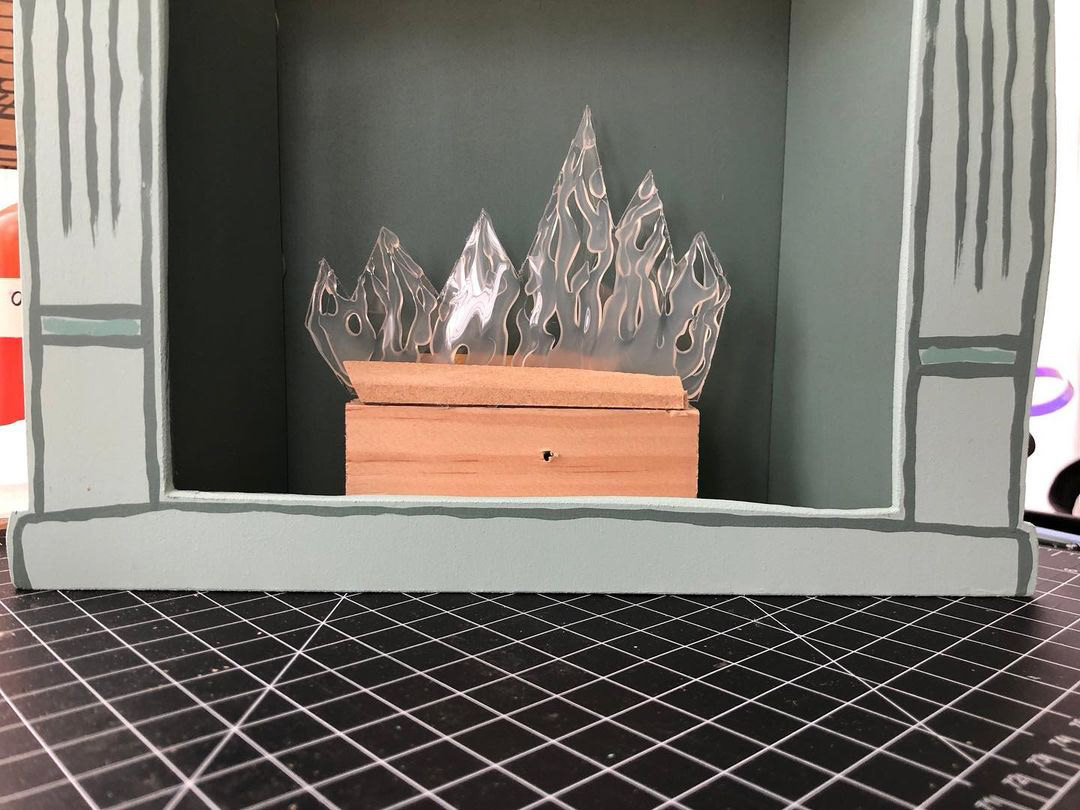 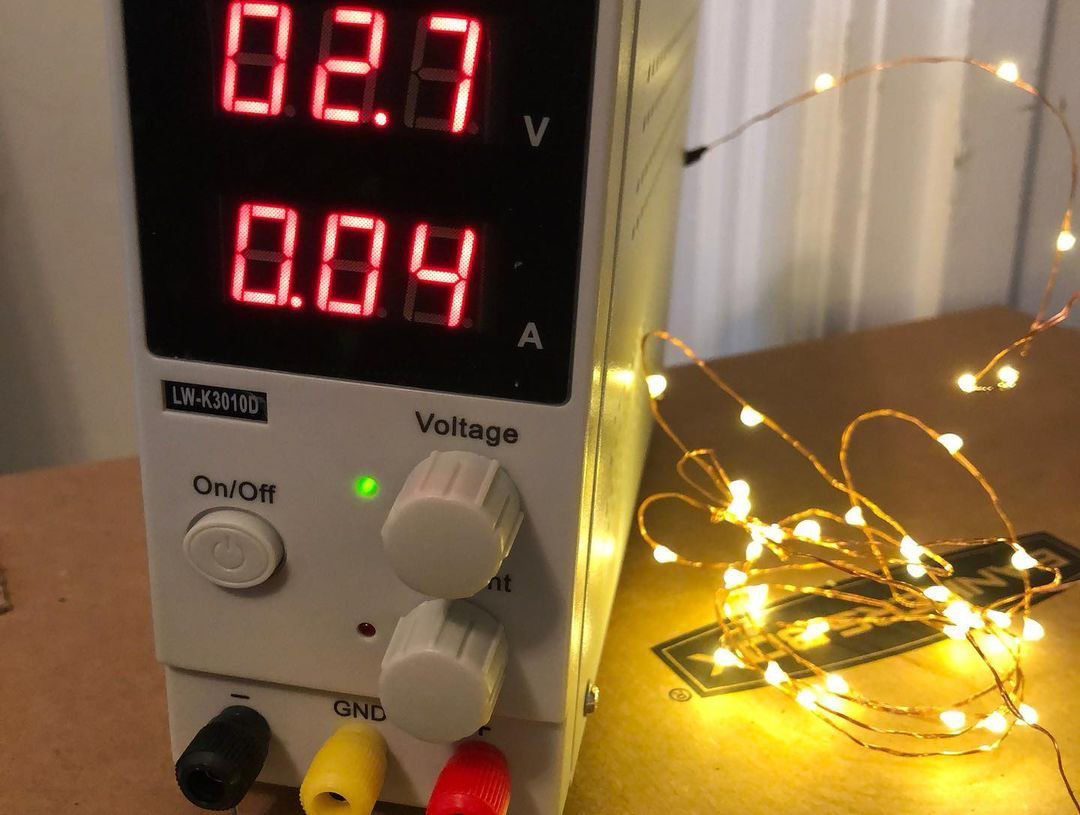 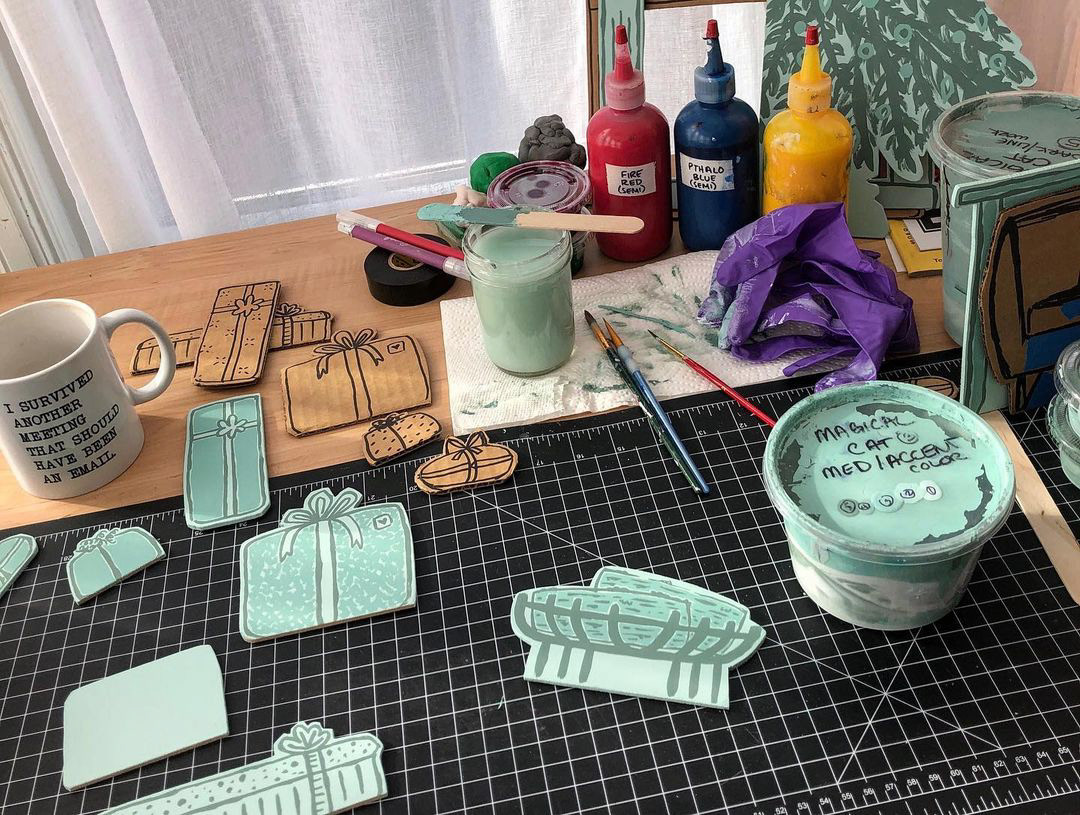 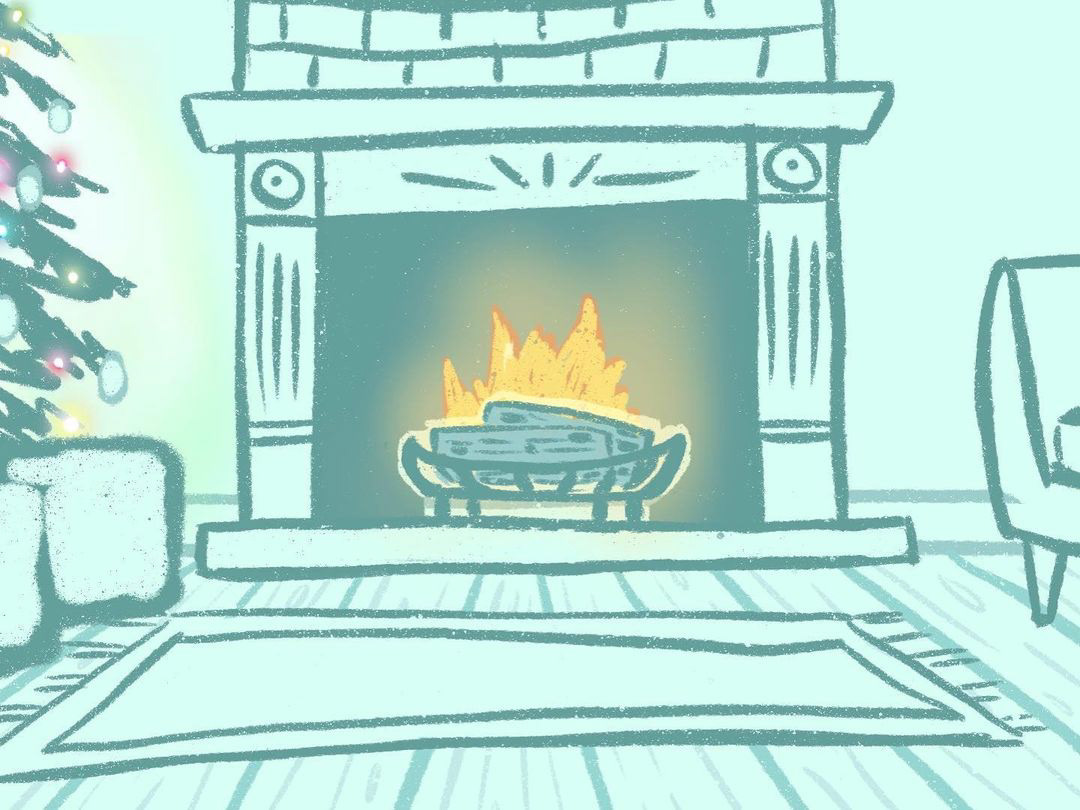 1:03 Eli in "Dungeons & Dreidels"
Story & Art: John Sumner
Website: https://johnsumnerdesign.com/
Written By: Justin Michael
Website: http://www.heyjustinmichael.com/
Instagram/Twitter: @heyjustin
“Eli Intro” Written and Performed By:
Eli Gunnell
Voice Characterization: Dan Lippert
Twitter: @danlippertcool
Additional Voices:
Frank Higginbotham
Gianni Higginbotham
Henry Gunnell
Laurel Gunnell
Gunnar Sumner
Kaden Sumner
—
Animation Wild Card presents, John Sumner :⁠ ⁠⠀⁠⠀⁠⠀⁠⠀
⁠⠀⁠⠀⁠⠀⁠⠀
"John Sumner spent most of his young life as a journeyman, traveling across the country and working a ton of odd jobs. Ultimately, all of these experiences would come in handy as he settled into the entertainment industry in Los Angeles, CA. ⁠⠀⁠⠀⁠⠀⁠⠀
⁠⠀⁠⠀⁠⠀⁠⠀
For the past decade, John has been primarily working as a Production Designer/Art Director/Builder for Film, Television, and Internet Content, with a focus on stop-motion.⁠⠀⁠⠀⁠⠀⁠⠀
⁠⠀⁠⠀⁠⠀⁠⠀
When John isn't working on professional jobs, you can usually find him carving tikis, drawing comics, and trying not to get his butt kicked by his wife and kids in Tae Kwon Do.⁠"

Creator John Sumner , shared a bit about the process of making Eli in "Dungeons & Dreidels" :⁠⠀
⁠⠀
"A quick little story...⁠⠀
I hadn't planned on making a holiday episode for Eli, so when it was announced, I saw this as an opportunity to create an all 2D episode, and enlisted the help of Justin Michael ( @heyjustin ) to help me write it. Not only is Justin a talented actor, but he's also a great writer. (Check out Infinity Train to witness examples of his skills.) ⁠⠀
⁠⠀
So, just about every holiday, I host a D&D adventure for my kids and their cousins, and I knew I wanted that to be the premise of this episode. Justin did a great job getting all of the kids into the episode and DJ Pinklepuss too. And the line about "Experience Points" at the end is brilliant. Another fun fact is that I actually got the kids to voice their own characters and help create sound fx and loops for this episode. It really became a family event." 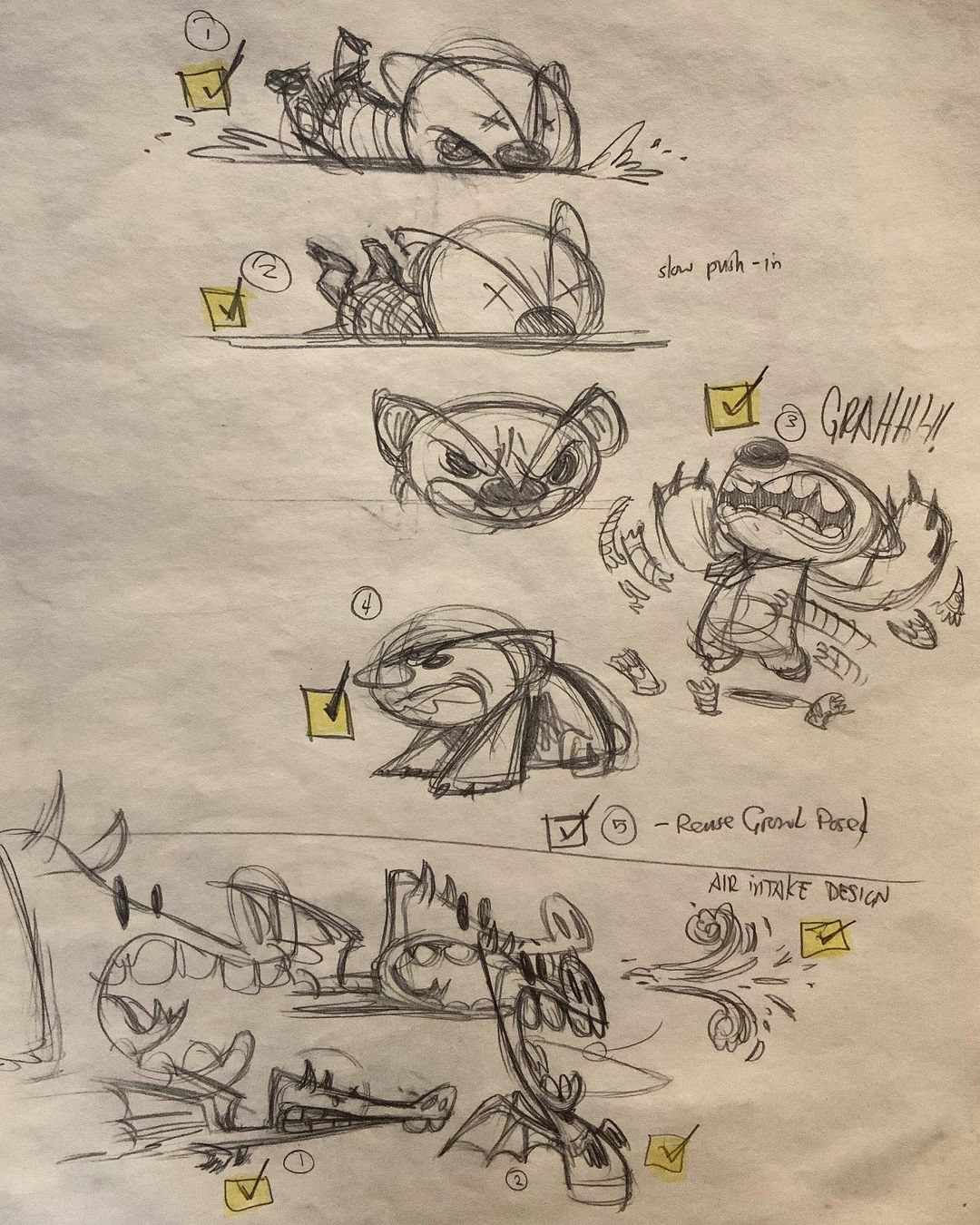 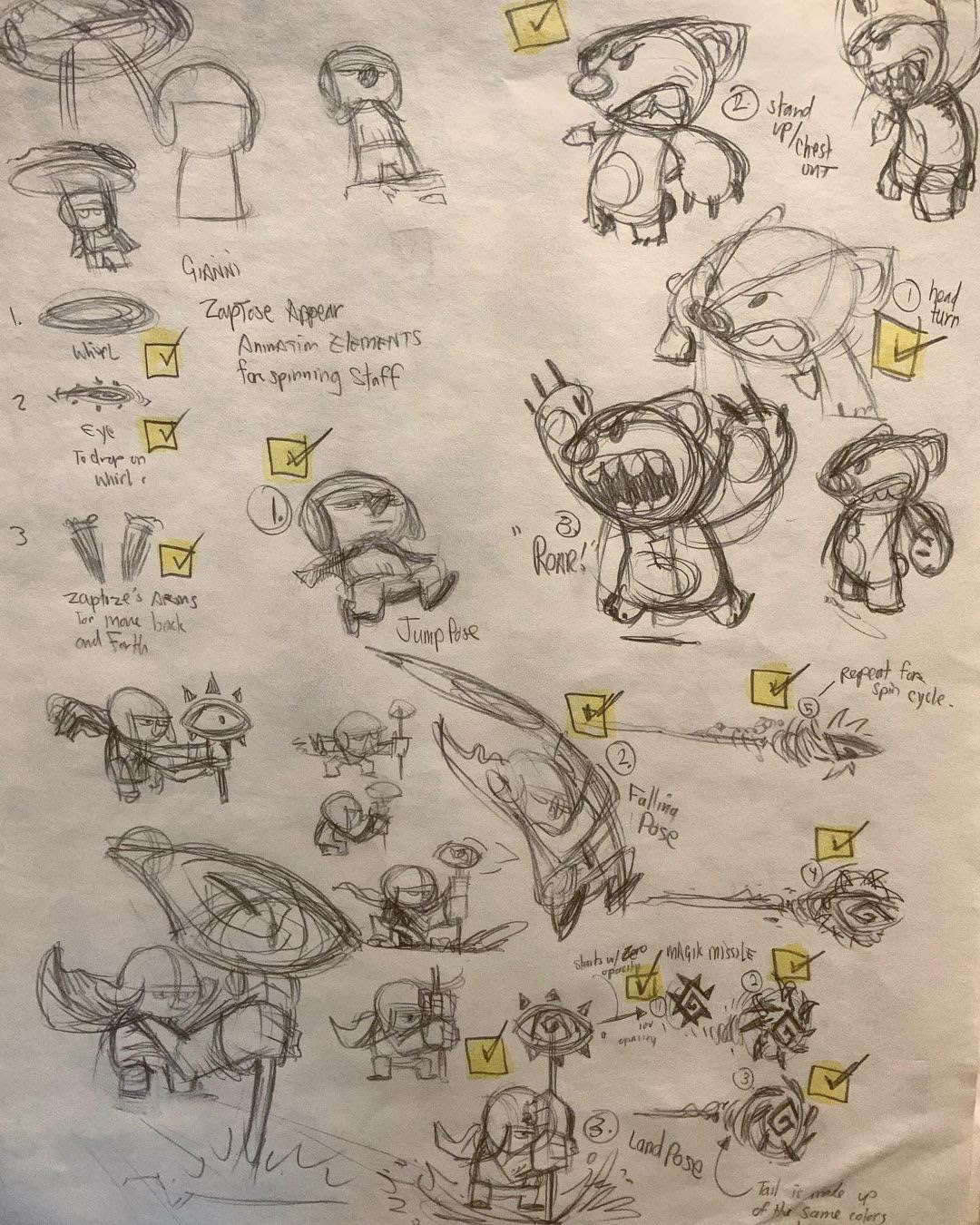 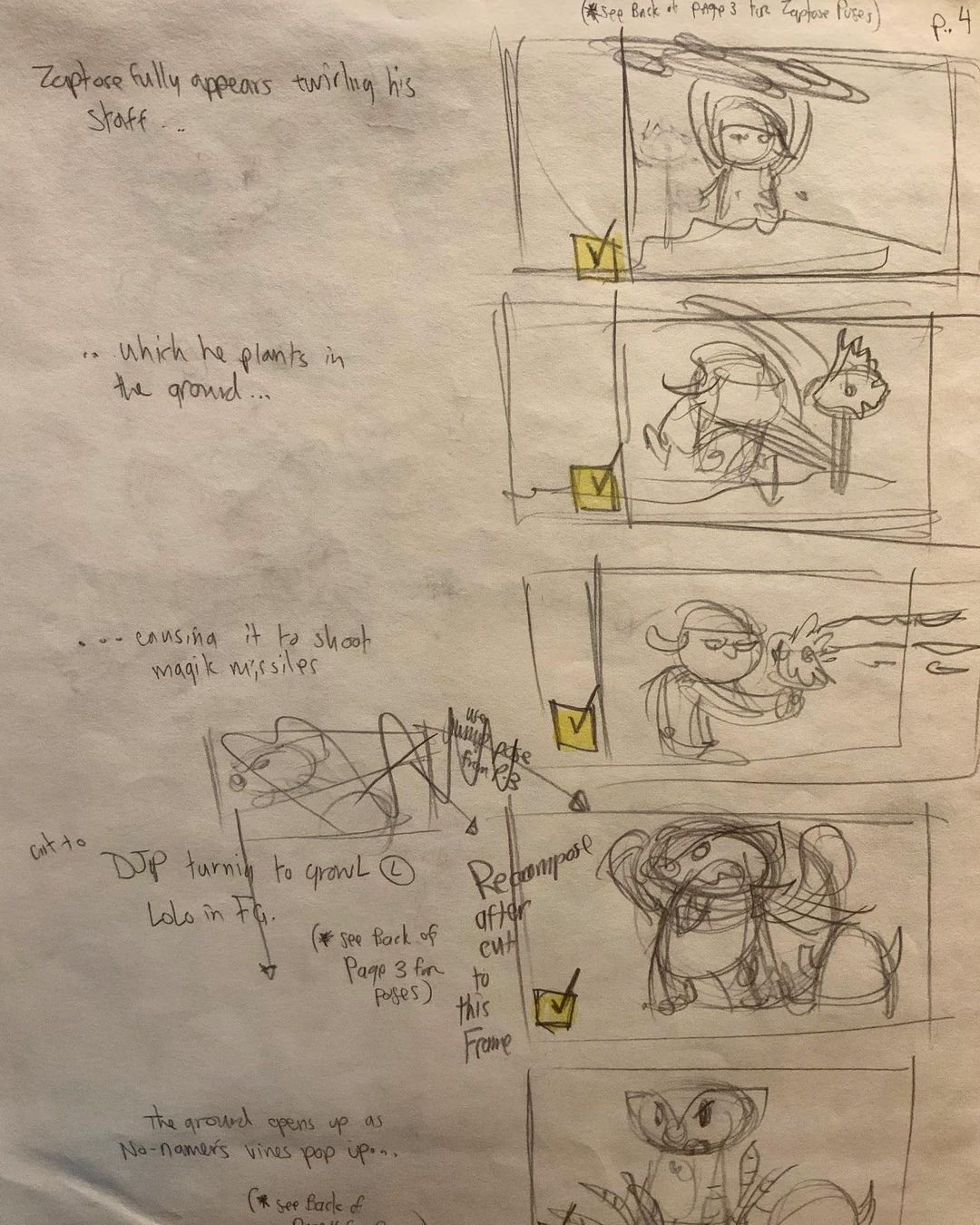 2:47 “Silent Night”
Animation & Backgrounds:
Amber Rankin
Instagram/Twitter: @Ambermations
Music: Youtube Audio Library
Sound FX: https://findsounds.com/
—
Animation Wild Card presents, @Ambermations :⁠⠀
⁠⠀
"I’m a 2D animator and illustrator currently working in Sacramento, CA. I love storytelling and getting into the minds of characters to figure out how they move-no matter how small the scene! I am currently an animator/designer with Applovin’ in San Francisco working on ads for mobile games in Adobe After Effects. I also have experience as a cel animator on several short films--I animated 2D effects for credits scenes for a short “Let’s Eat” with Anamon Studios and am currently working on the short film “Amped” as a 2D character animator. When not animating, you can find me drawing personal comics, hanging out with my cats or attempting to bake some edible bread."⁠⠀

Animator, @Ambermations , shared a bit about the process of making "Silent Night" :⁠⠀
⁠⠀
"Hi! I’m Amber, I’m a 2D animator currently up in Sacramento, Ca. I heard about Wild Card Animation from their recent Ink & Paint Girl’s Podcast episode and reached out! I had recently made the leap into freelancing full time and was looking for ways to connect with others. This was a really challenging and fun project to be a part of and I’m so grateful to be able to join!⁠⠀
⁠⠀
It had been a long time since I’d created any original short films, so this was definitely a challenge (and on a short turn around!) I tried to come up with a concept to fit into a short time frame, and be able to animate it within a couple of weeks. As usual, I had too many ideas and cut it down significantly from my first few passes. You can see a few rough “outtakes” that I considered and sketches! This idea came from my cat, who’d meow constantly and usually without any reason--or that’s how it seemed!⁠⠀
⁠⠀
I really enjoyed having the challenge of trying to create a complete story in a short time frame! Before joining Animation Wild Card, I hesitated to start personal projects like this because I’d let my ideas turn into epic films that I could never complete! Now that I’ve gotten one complete I can’t wait to delve into more projects and focus even more on drawing a completely story out in just a few seconds!"⁠⠀ 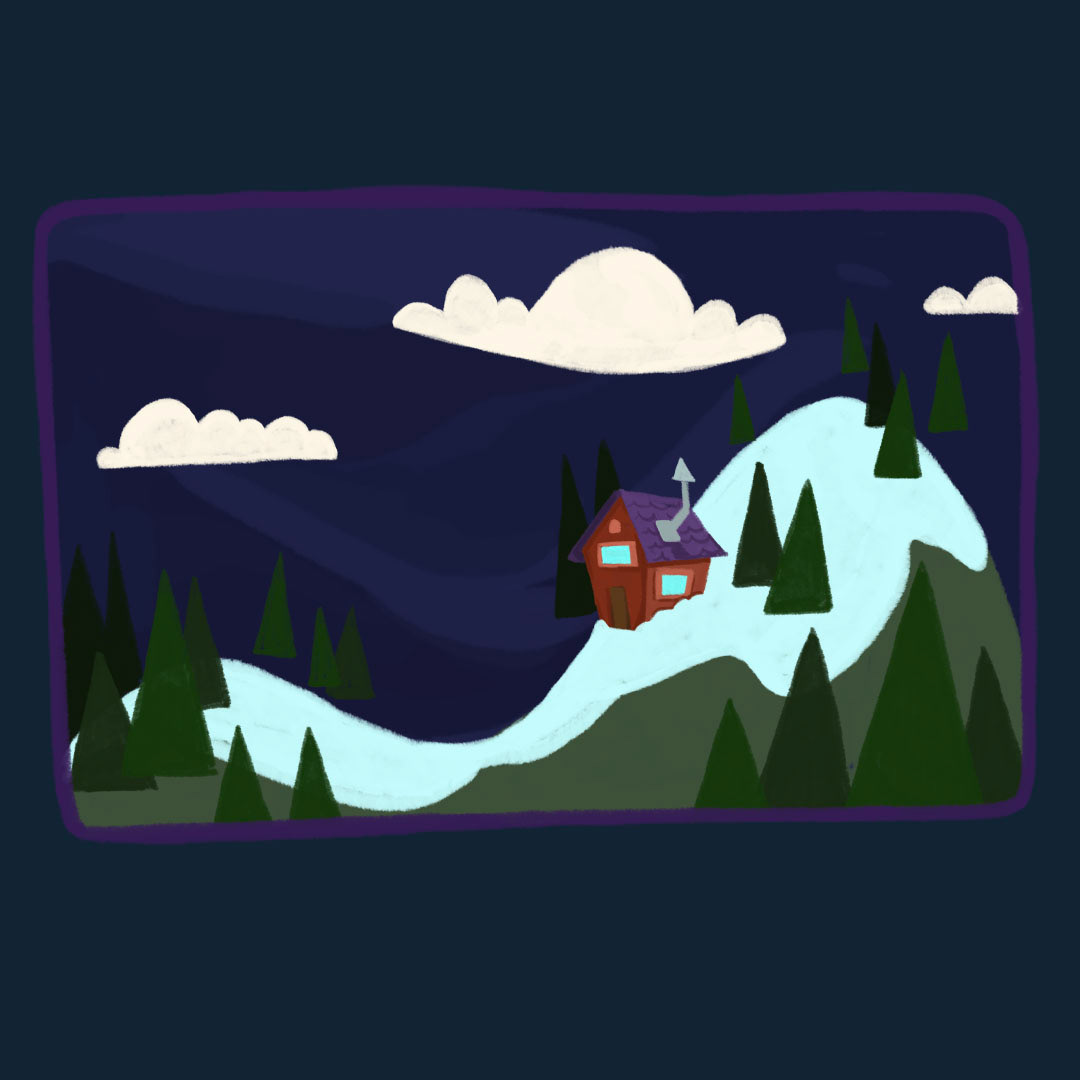 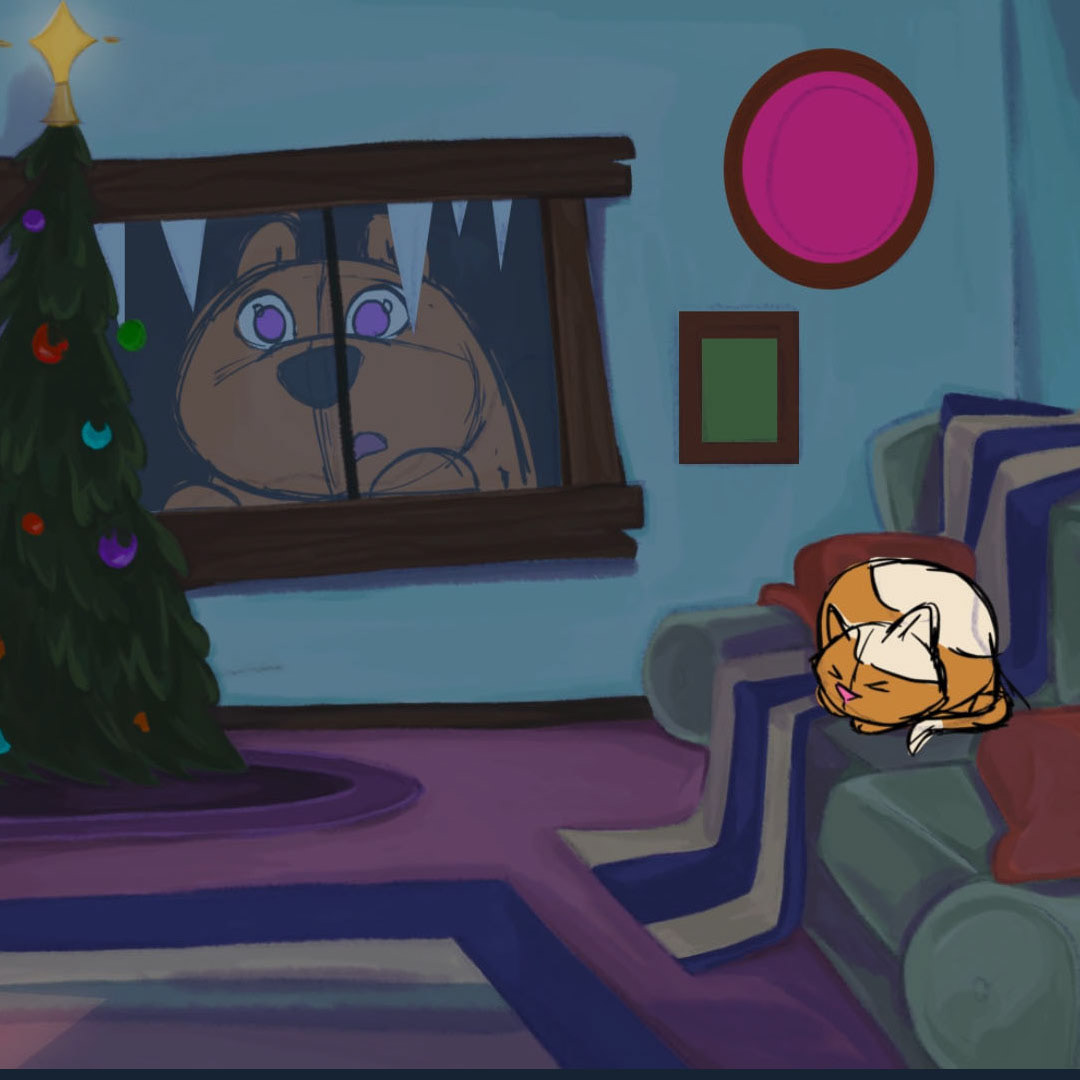 3:08 Ovenly Cookie Recipe
Animation By: Casey Follen & Catalyst Castle Studios
https://caseyfollen.com/
https://catalystcastlestudios.com/
Instagram: @catalystcastlestudios
Recipe By: Ovenly
https://www.oven.ly/
Facebook: @ovenlyNYC
Instagram: @ovenly
—
Animation Wild Card presents, @CatalystCastleStudios: ⁠
⁠
"Hi, I’m Casey! I’m an artist and production manager based in Los Angeles. When not working as a production manager for bigger animated projects here in Los Angeles, I’m developing my freelance practice, @CatalystCastleStudios . It’s important to me to maintain and grow my own artistic voice, and AWC is always a great opportunity to do that. ⁠
⁠
@alexiseved and I oversee the day to day of Animation Wild Card, but I haven’t contributed a short since our very first episode back in April! I just had to come up with something for the last episode of the year. I wanted to hit the holiday-themed brief while also filling out my freelance portfolio for @catalystcastlestudios . I’ve been meaning to stretch my wings and make an animated recipe video for a while now, and if not now, when?!⁠
⁠
I was having trouble thinking of a recipe that would lend itself to being represented this way. Then it hit me that my favorite cookie recipe would be perfect. I discovered @ovenly’s cookie recipe when I was interning in NYC way back when (shout-out @hellohornet). I reached out to see if they would be open to me animating their recipe, and they agreed! Up next, I’ll share some behind the scenes of what went into making this short.⁠
⁠
Also! I’m always looking to partner with businesses and individuals that would benefit from content like this, so hit me up if that’s you or someone you know! ⁠Happy Holidays!"⁠

Creator, Casey Follen from @catalystcastlestudios, shared a bit about the process of making Ovenly Recipe Video: ⁠⠀
⁠⠀
"I love, love, love preproduction, so I had a ton of fun researching the visual language I wanted to use for this short. I like to pull all my research together into mood boards. This short’s board includes color, texture, and font references; select images from the recipe maker’s (@ovenly) social media; and other animation/visual references to narrow down the overall look. ⁠⠀
⁠⠀
From there, I plotted out the animation in storyboards. Once that was working, I blocked in some color to plan the shoot and dial in any materials/products I needed to get. I listened to plenty of commercial use music options and finally found a track with both holiday and uplifting vibes. Once I had an animatic and did a little baking, I was ready to shoot! ⁠⠀
⁠⠀
I thought I was starting with a simple shot to get some momentum going on stage, but little did I know dressing in the opening script in salt would be incredibly time-consuming! I ended up using a combination of paintbrushes and sculpting tools to move the salt into place and was very careful not to sneeze! Even though it was tricky, I’d like to do more with tactile lettering in the future. ⁠⠀
⁠⠀
Thanks for checking out the BTS from my short!"⁠⠀ 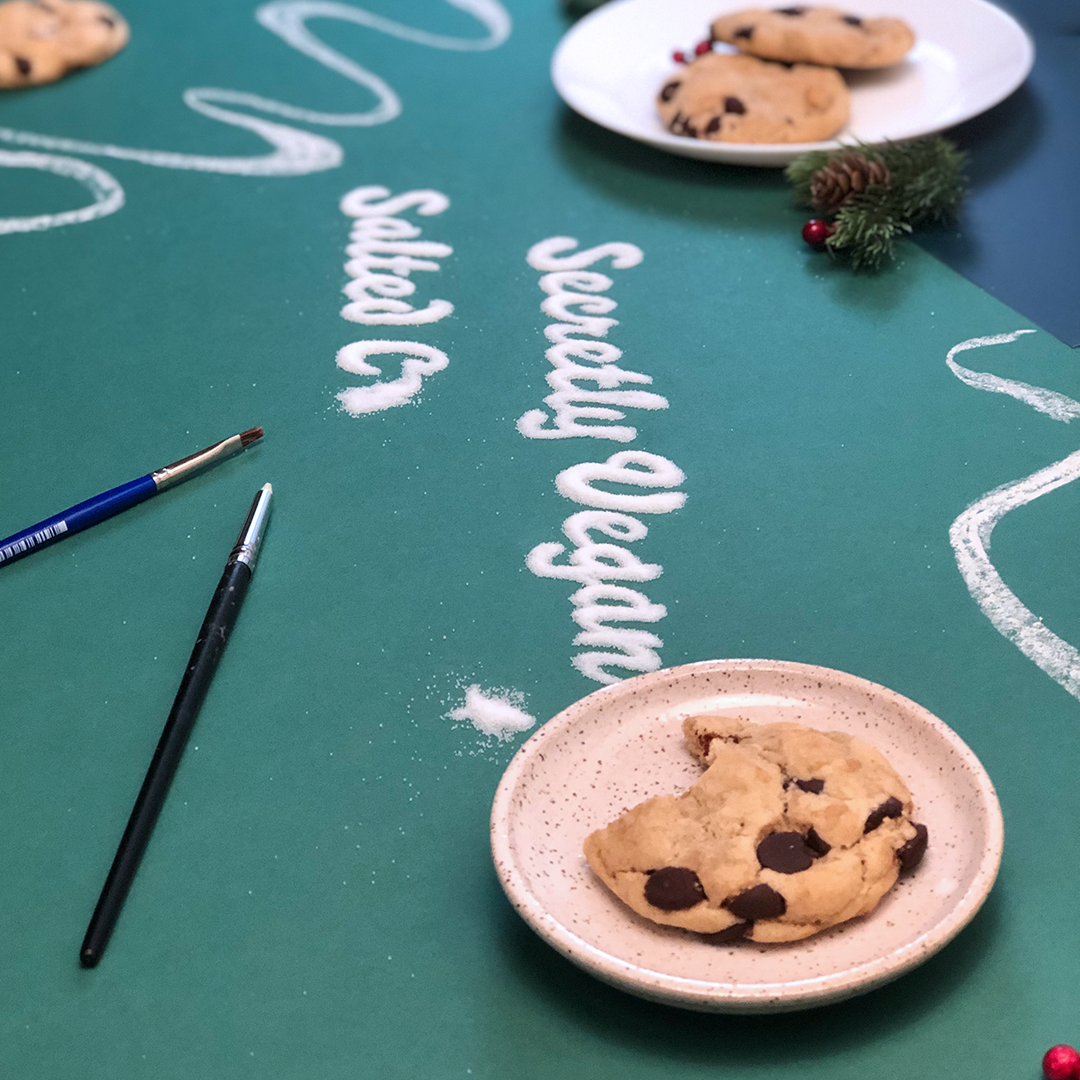 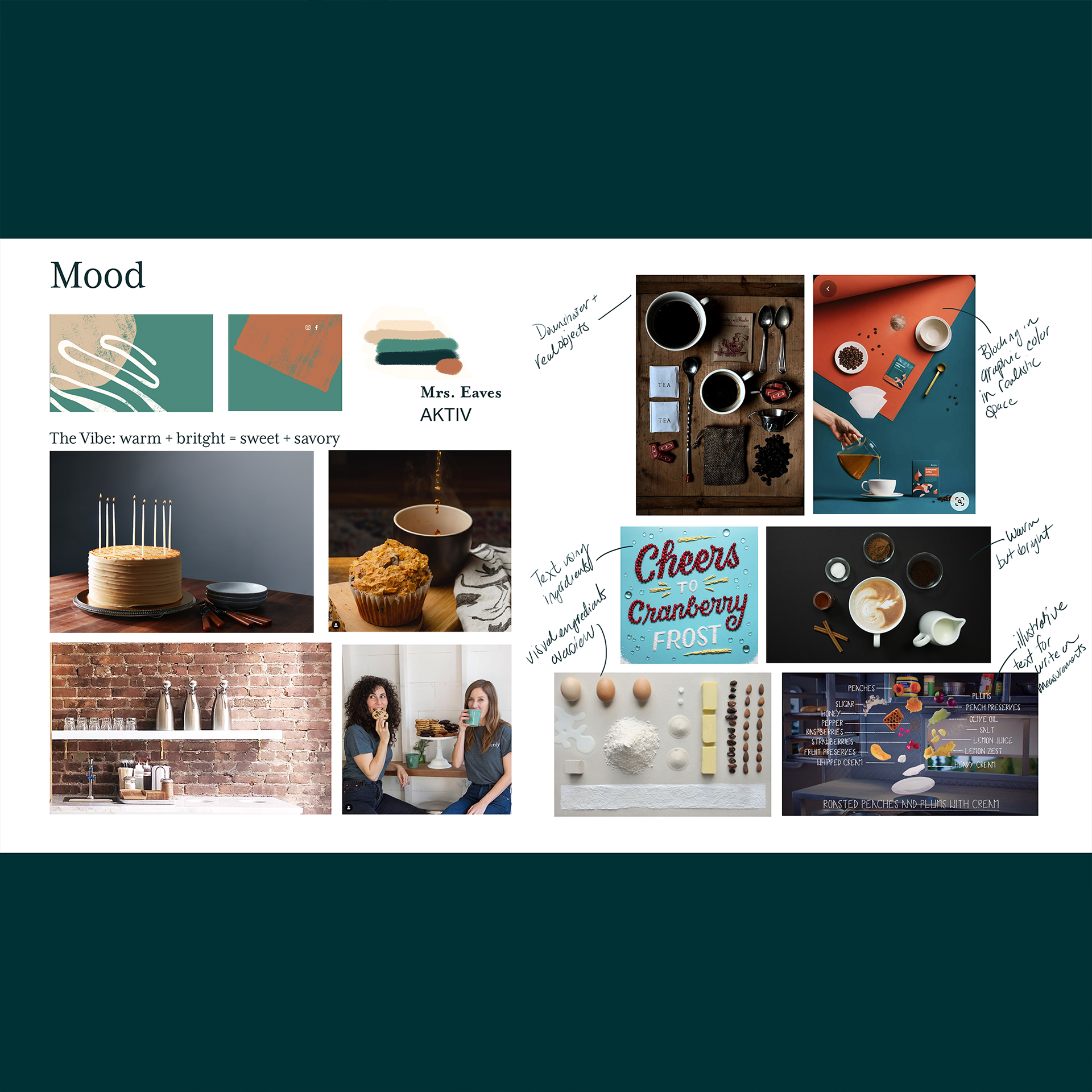 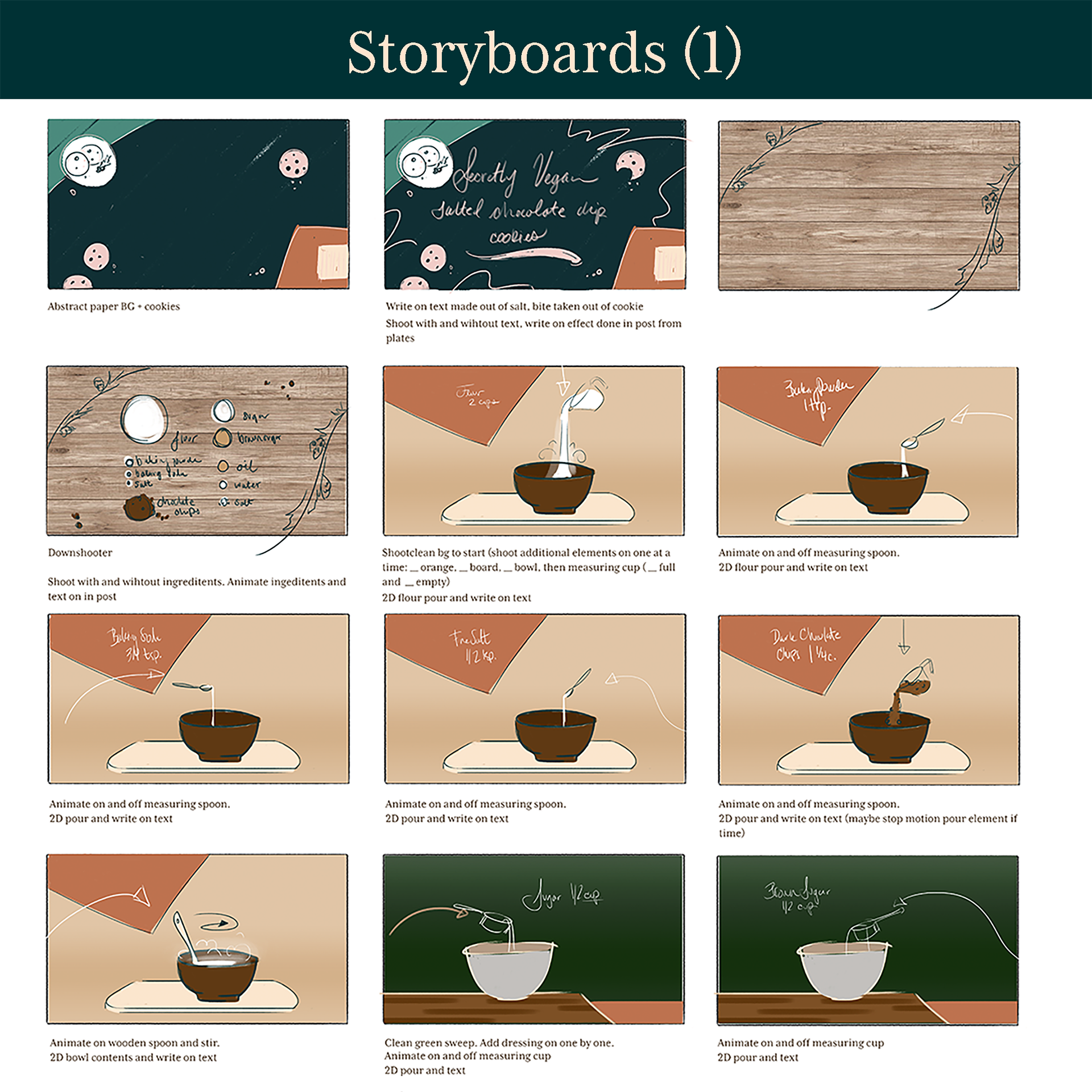 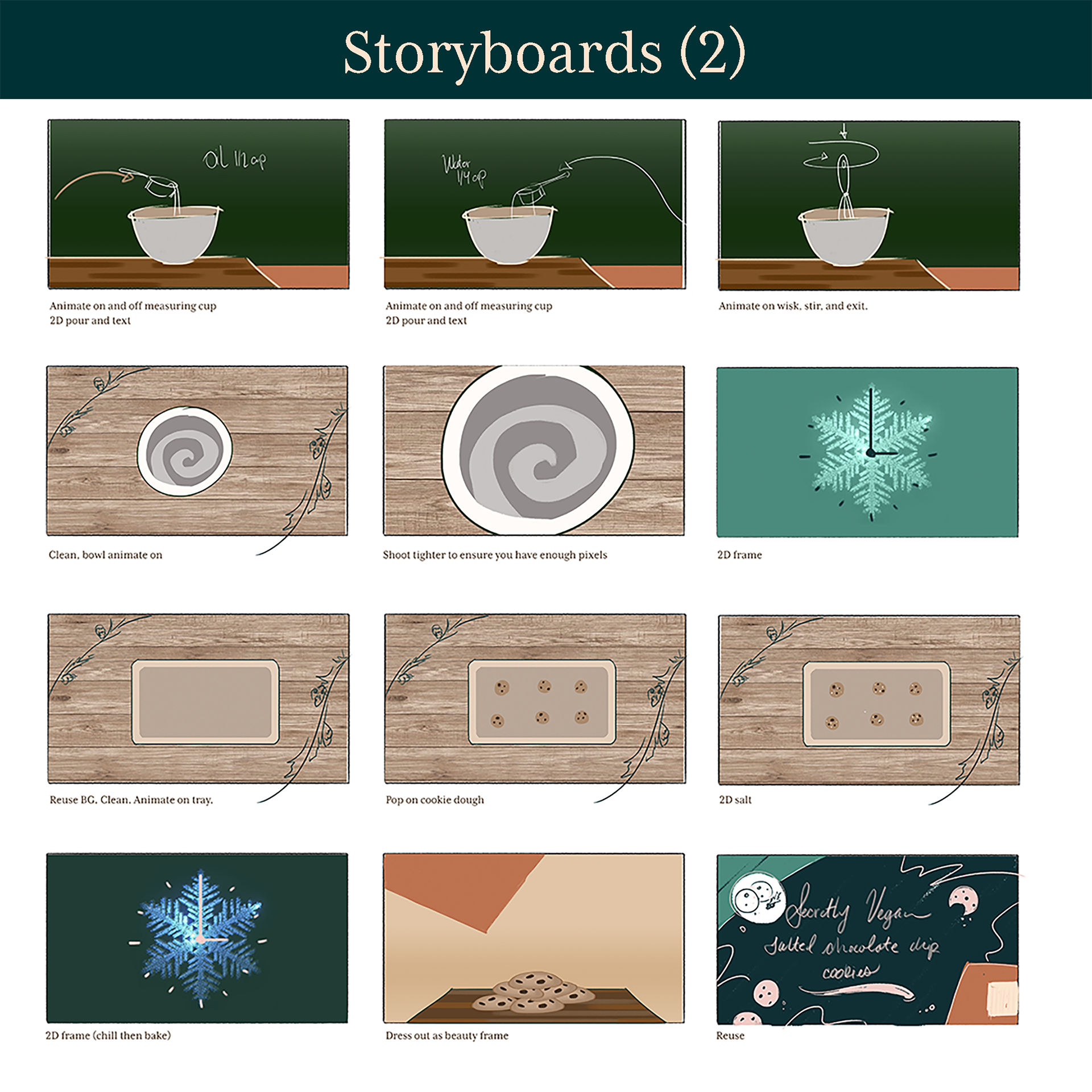 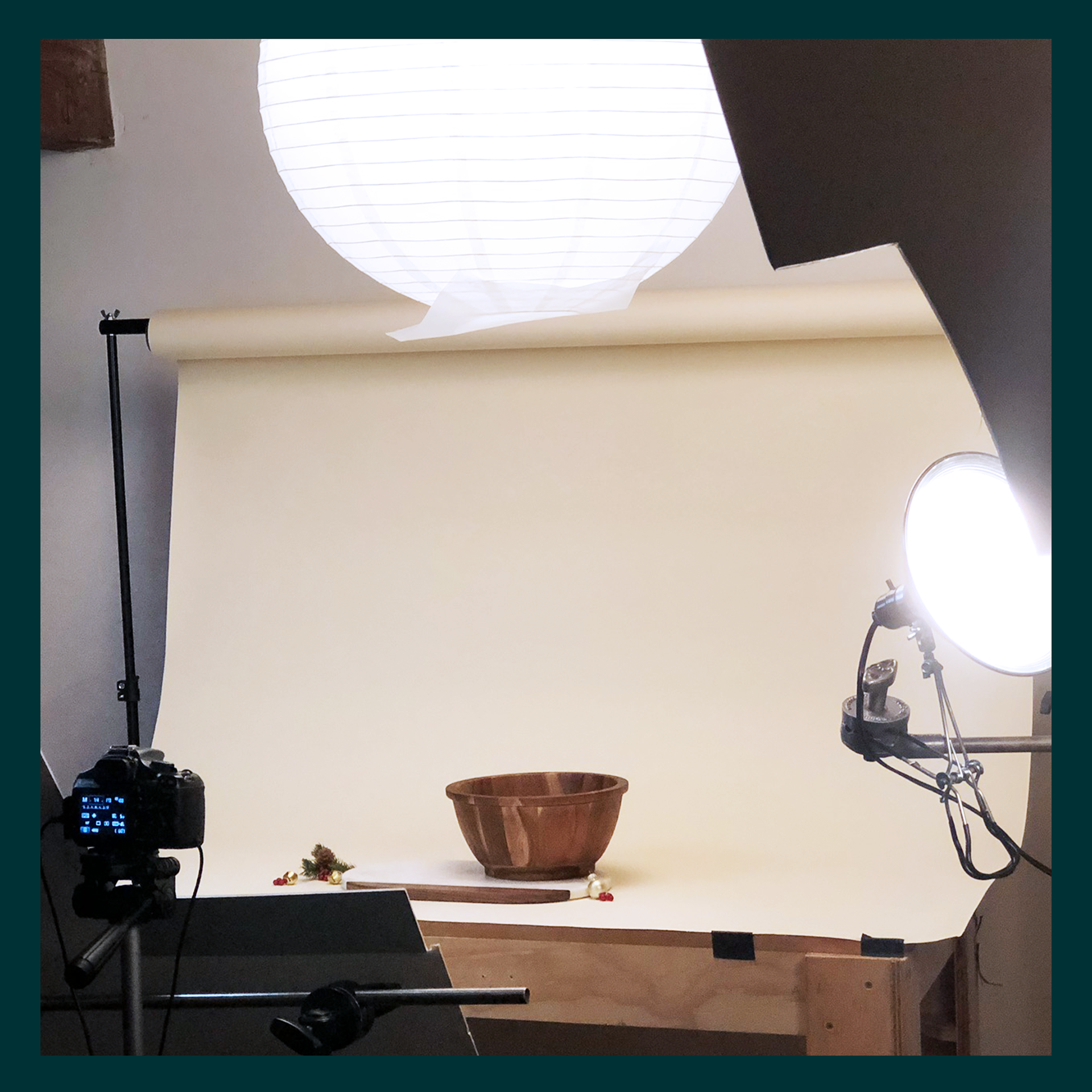 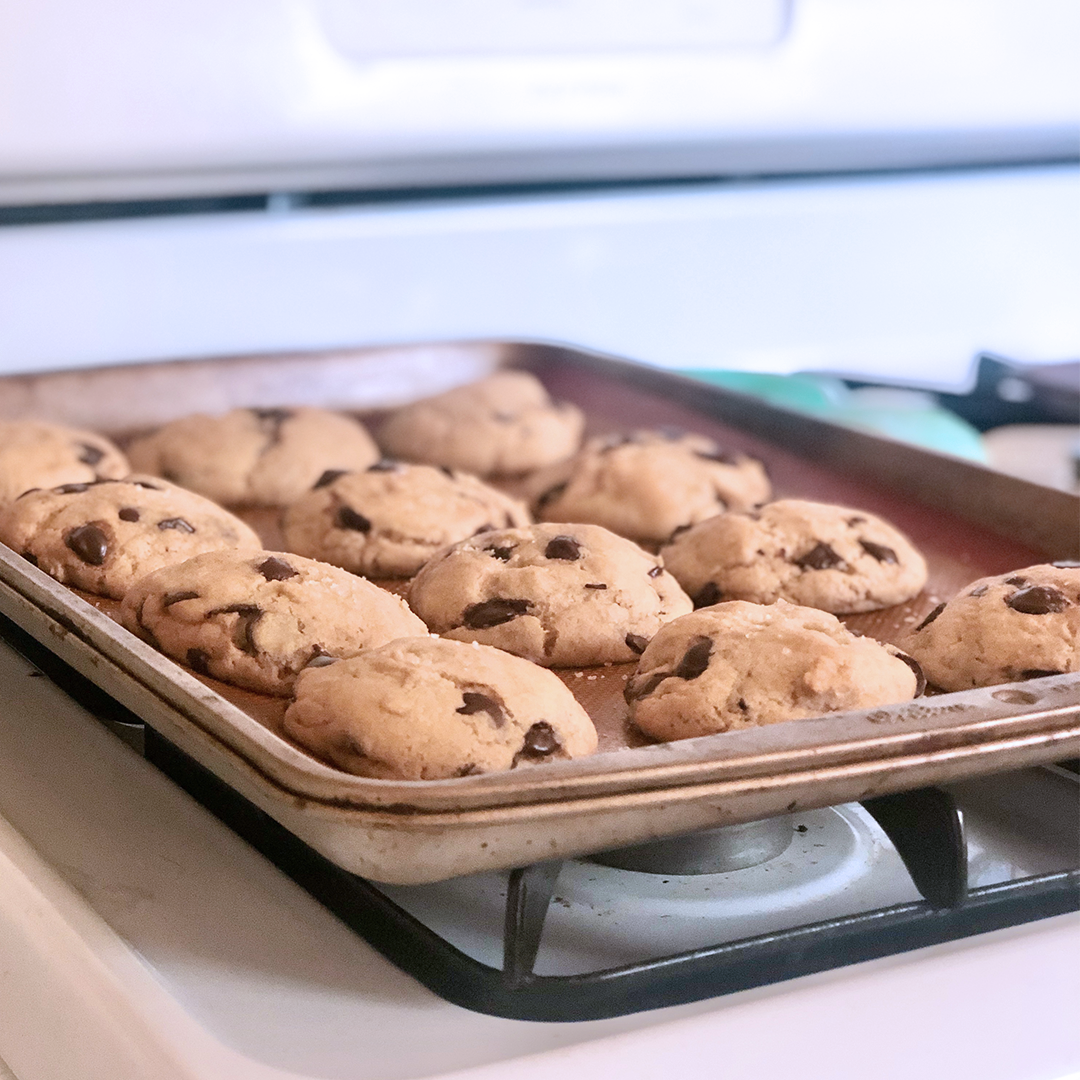 4:23 Ghosts of Christmas PARTY
By: Apartment D Films & Sean Malony
Facebook/Twitter/Instagram: @apartmentdfilms
Instagram: @seanchiridion
—
Animation Wild Card presents @seanchiridion of @apartmentdfilms :⁠
⁠
"Apartment D is an animation studio with a passion for exhilarating stop motion that takes partying to the next level! Sean first met our dear bros, the Party Ghosts, at the original apartment complex that our studio started from, where they starred as characters in an independent film. The Ghosts’ burning party spirits have continued to influence the path Apartment D carves through the animation industry. The truest of parties never die, but party beyond Eternity itself!!"⁠

Director / Animator, @seanchiridion , shared a bit about the process of making "Ghosts of Christmas PARTY" with @apartmentdfilms :⁠⠀
⁠⠀
"The original Party Ghost puppets were life-size so they could directly interact with our apartment, but for this festive rendition of Party Ghosts, we switched it up and went with a downshot approach. The Ghosts are made of Bristol board, felt, yarn and magnets. The backgrounds are elements from Sean’s student thesis film, “Sean’s Thesis: The Movie,” and were also featured in the Ninja Sex Party music video “Thunder & Lightning.” It’s fun to animate something just because it’s party, and we had a lot of fun especially recording the VO for this one on a lunch break. Party on!!!"⁠⠀ 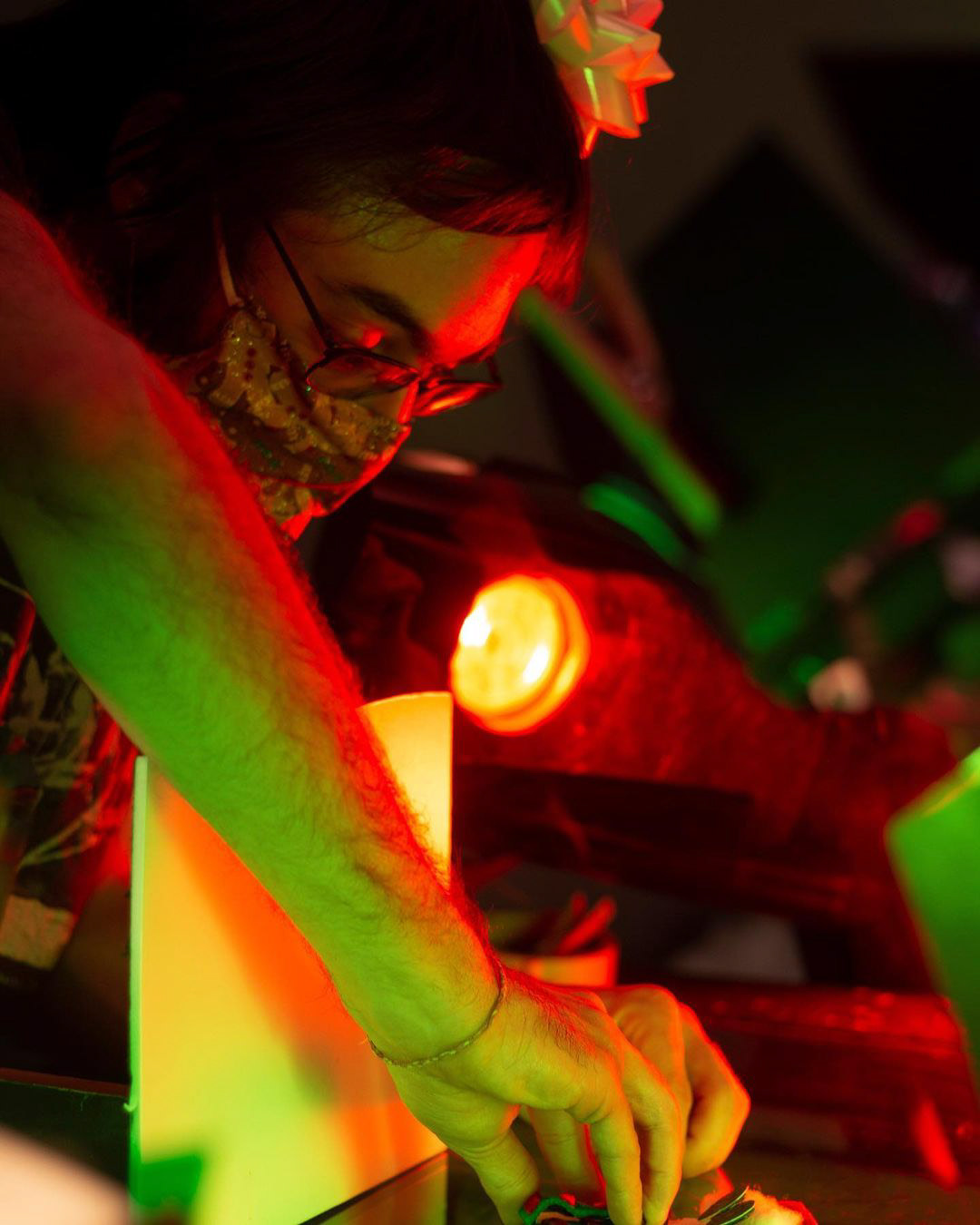 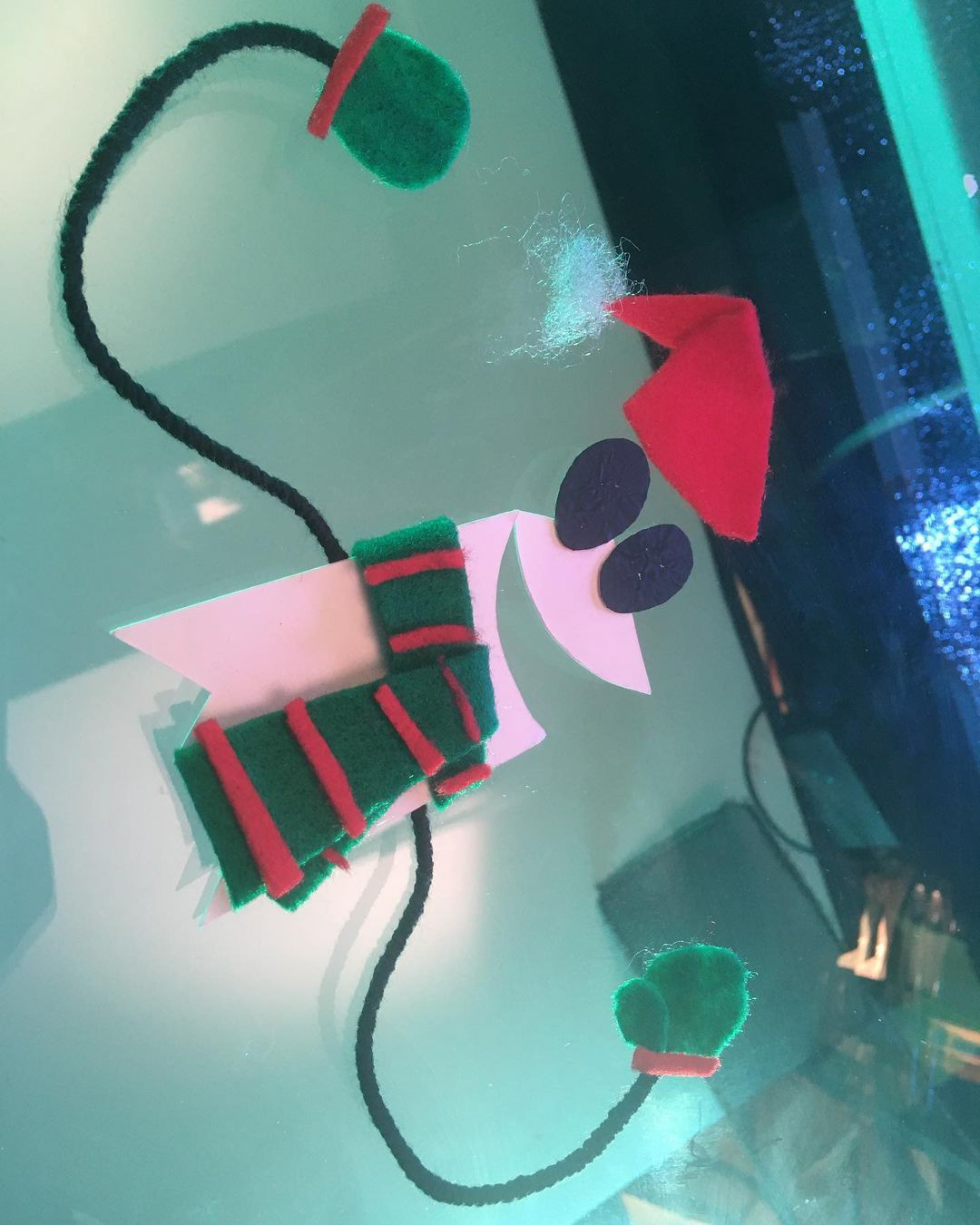 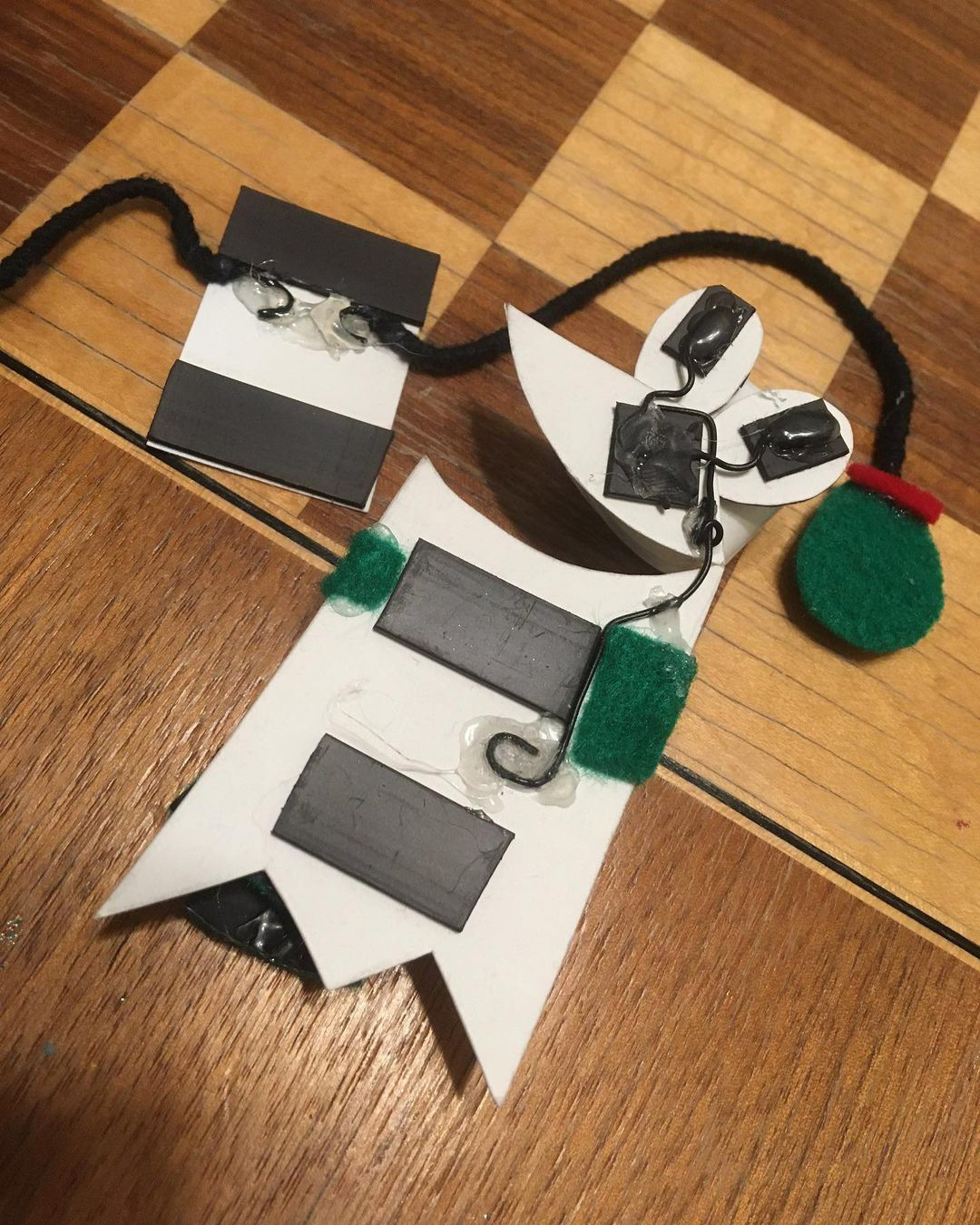 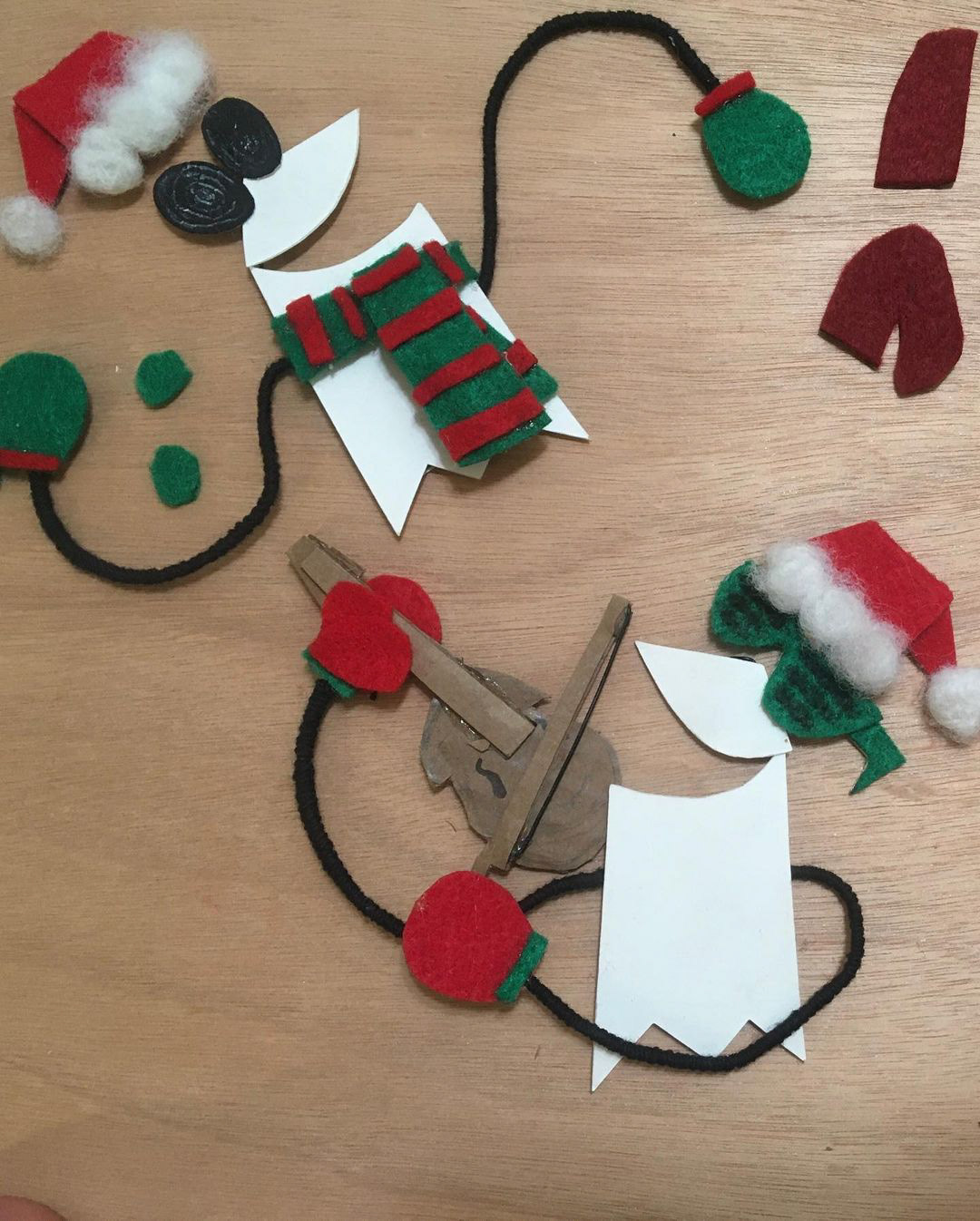 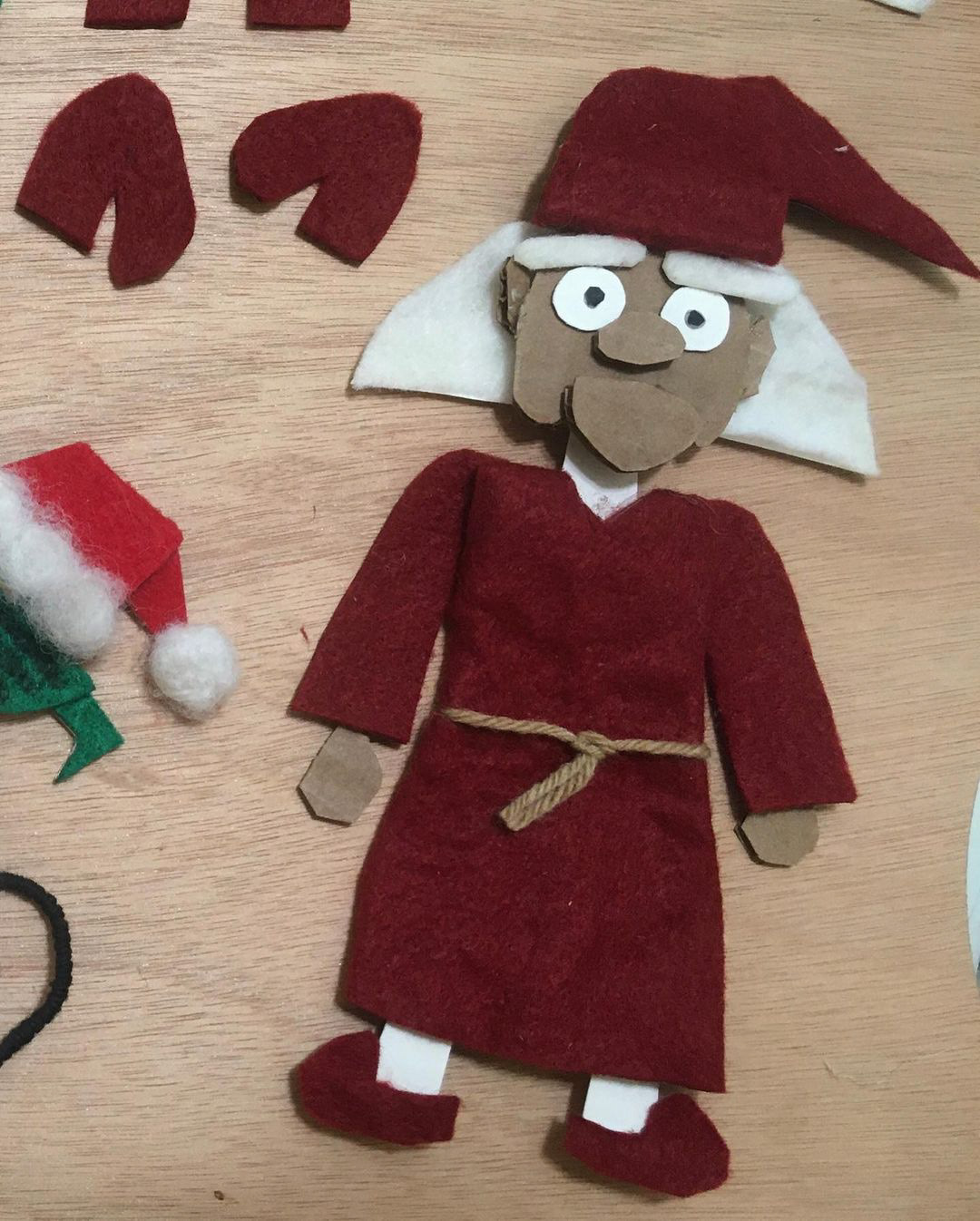 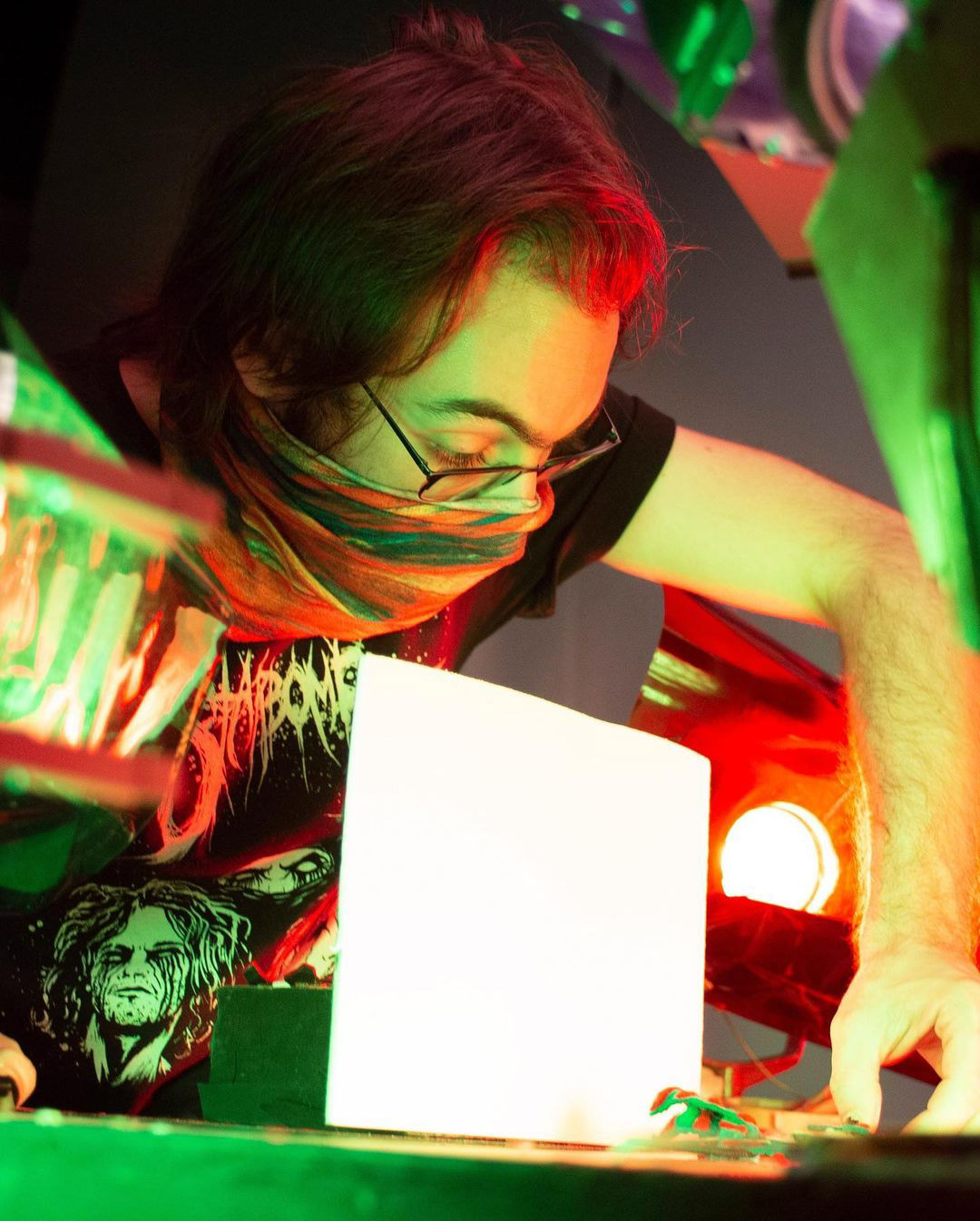 ———
Thank you for viewing Episode 11 of Animation Wild Card, our Holiday Special!
———
↑Back to Top